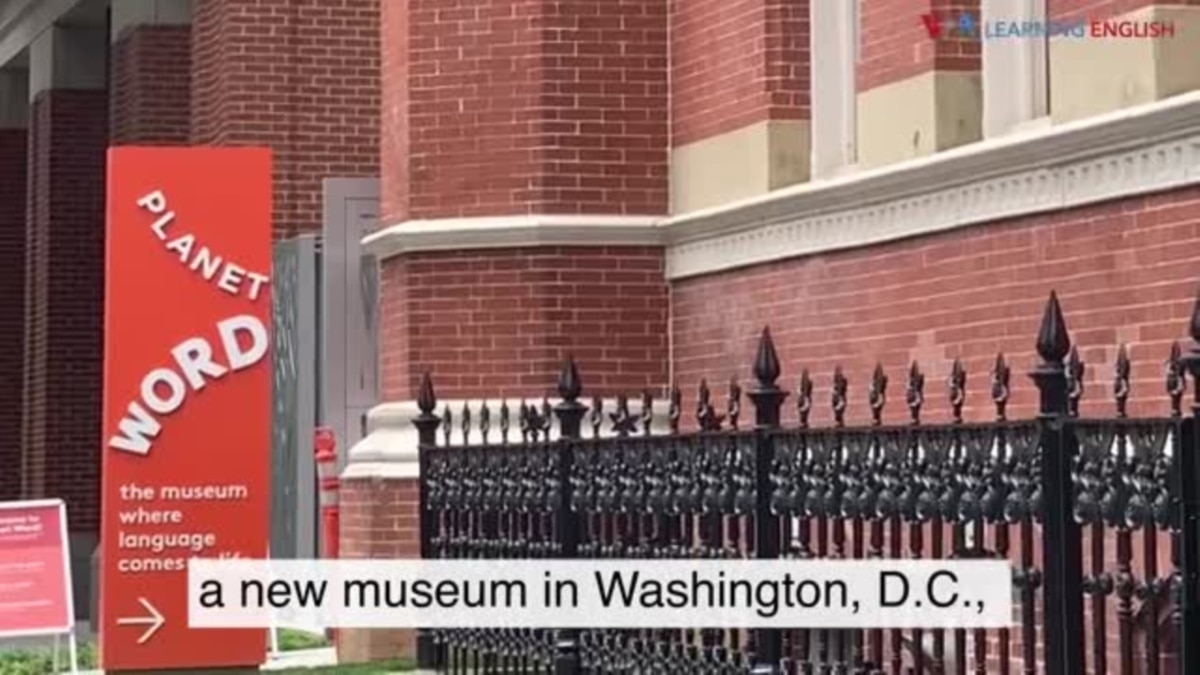 When visitors enter Planet Word, a new museum in Washington, DC, they will see Talking Willow, a large piece of art representing a tree.

Passing under the work, they can hear recordings of speeches in hundreds of languages â€‹â€‹coming from the tree. Most of the words seem foreign to the listeners. The different voices also speak at the same time. The resulting noise is similar to that produced in a crowded theater before a performance begins.

Rafael Lozano-Hemmer completed the play last year. On her website, the artist states that Speaking Willow “reminds us that language is what defines our specific communities and connects our many cultures.”

Lozano-Hemmer made the piece especially for the museum.

It is the first of several immersive experiences for visitors to Planet Word, a museum dedicated to words and language.

The exhibitions playfully explore the vast and complex subject of language. Ann Friedman is the founder and director of Planet Word.

“How to do a abstract concepts like words and language come to life without objects that you can touch, see and feel? … You have to be immersive, participatory experiences that you will remember forever because they are unique, exciting and social. “

In one room, a video is shown showing babies speaking their first words. Another room, titled â€œWhere Do Words Come From,â€ teaches the history of some common English words. The space includes a 22-foot-high â€œWall of Wordsâ€, where visitors speak into devices and learn about the roots of the English language.

Narrator 1: You are in front of about a thousand words. And that’s not even one percent of the entire English language.

Narrator 2: Where are they from?

The creators of the exhibition started the project with 28 English words they wanted to explain. They narrowed this list down to the funniest and most interesting words. â€œArachnidâ€ was one of the words that was the subject of the exhibit. It is the scientific word for spiders, among other creatures.

Another room invites listeners to speak and learn different languages. Native speakers of 28 languages â€‹â€‹and two sign languages â€‹â€‹teach people sayings in those languages. They also explain how language shapes their understanding of the world and how words cannot be separated from culture.

For example, a Japanese-speaking presenter explained how politeness is very important for Japanese culture. The language has several words to choose from to address another person. The words speak of the nature of the relationship between speaker and listener.

The Quechua people are originally from Peru. They understand the idea of â€‹â€‹time in a unique way. The Quechua speaker explained that since the future cannot be seen, it is â€œbehindâ€ us. The past, however, is before us, where we can see it.

Other rooms explore the different ways language is used, from humor and songwriting to public speaking and advertising. Visitors can sing karaoke while learning to write songs, record famous speech, play joke game and teach computer to do cartoons. Almost all of the exhibits are interactive and most require visitors to speak aloud.

Caitlin Miller is the director of education for Planet Word.

â€œYou get better at reading by reading,â€ Miller said. “You become a plus confident speaker by speaking and listening.

An exhibition room is devoted to books. It is designed to look like a rich old library. Books line the shelves. When a book is placed on the table, a recorded reading begins and pictures appear.

Narration of the book: But Shady Creek is not exactly a progressive paradise …

Planet Word is housed in the historic Franklin School in Washington. The DC government gave Friedman limited control of the property in 2017. She spent $ 35 million on the building and the museum.

Friedman is a former professor of reading and writing. She wanted to create a museum to arouse interest and curiosity in writing and language. The museum is designed primarily for teenagers, but most adults can also learn and enjoy with a visit to Planet Word.

Friedman hopes people will leave the museum with a better understanding of the words they use every day and the world of languages â€‹â€‹around them.

â€œAnd in a globalized world, we think it’s a feature. “

I am Jill Robbins.

Dan Novak reported this story for Learn English. Caty Weaver was the editor.

Run the Quiz to find out

Words in this story

immersion – nm full involvement in an activity or interest

abstract – adj. relating to or involving general ideas or qualities rather than specific people, objects or actions

polished – adj. having or showing good manners or respect for others

confident – adj. feel or believe that you can do something well or achieve something : have confidence

feature – adj. feel or believe that you can do something well or achieve something : have confidence