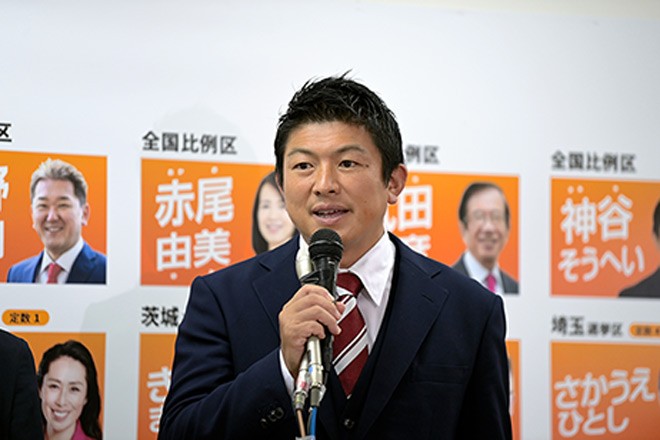 One of the most stunning results to emerge from the Upper House elections was a seat won by an extremely conservative party calling for freedom to opt out of masks and vaccines amid the ongoing pandemic.

The 2-year-old Sanseito Party (Political Participation Party), which espouses anti-immigrant and protectionist views, won a seat in the proportional representation segment of the election, attracting a staggering 1.76 million of voice.

It was 500,000 votes more than the number obtained by the Social Democratic Party, which has a long history in Japanese politics, and the anti-NHK (Japan Broadcasting Corp.) party, founded in 2013 by a former employee of the public broadcaster. object to the charge.

One of Sanseito’s co-leaders, Yumi Akao, 57, described it as “the first Japanese political party to oppose globalism”.

Sanseito General Secretary Sohei Kamiya, a former Assemblyman from Suita, Osaka Prefecture, who helped found the party in 2020, won the Upper House seat and is now set to pursue a set of conservative political measures in the Diet.

The party called the pandemic staged and strongly criticized the government’s handling of the health crisis. He uses rhetoric that resembles that of former US President Donald Trump and his calls to “make America great again”.

In a campaign speech, one of the party’s candidates stressed the need to “restore a real Japan”, calling it “the best country in the world”.

Ninety-eight percent of its 50 candidates support protecting domestic industries, according to a joint study by Asahi Shimbun and the University of Tokyo.

Asked about the parallels to the “America First” policy championed by Trump, Kamiya acknowledged the similarities, saying, “There’s no doubt about it.”

“We don’t want to care only about Japan’s interests,” he told the Asahi Shimbun. “But right now, we have to revive Japan before other countries.”

As of December 2021, the party has only about 10,000 members. This figure has since increased ninefold.

It fielded candidates in all 45 constituencies and five in the proportional representation segment in the Upper House elections. And Kamiya told a news conference July 11 that the party intended to field hundreds of candidates in next year’s unified local elections to spread support across Japan.

The party owes much of this success to its strategy of winning over supporters through its YouTube videos.

Many of its supporters learned of the party’s existence after seeing them, according to party officials.

A YouTube creator in Tokyo in his 40s who has been following the social media air war closely said Sanseito beat the populist anti-NHK party in terms of video views this election.

“The party’s position that the coronavirus pandemic is not a big deal and that inoculation should be left to individual choice won the hearts of a certain segment of voters,” he said.

In terms of number of subscribers, Sanseito has 200,000 on his official YouTube channel. That still falls short of the 490,000 subscribers of the channel owned by anti-NHK party leader Takashi Tachibana, who has expanded his influence on social media.

But that’s only 40,000 less than Reiwa Shinsengumi’s number.

The party does much better on the platform than more traditional parties. The ruling Liberal Democratic Party has 130,000 followers, while the main opposition Constitutional Democratic Party of Japan has 20,000 and Nippon Ishin (Japan Innovation Party) has 30,000.

The growing momentum of the fledgling party, backed by around 90,000 members, was on full display at Shiba Park in Tokyo’s Minato ward on the evening of July 9, the final day of the election campaign.

About 15,000 supporters showed up and more than 20,000 watched the live broadcast when Kamiya, 44, gave his speech, according to party officials.

“If we reinvent education, the traditional Japanese spirit will be reinvigorated,” he told the elated audience. “Then people will start thinking about what will be good for others and for society.”

Sanseito listed three key policies for the Upper House election: educating children to help them think, rather than get good grades, and valuing Japanese and local traditions; providing food and health care that does not depend on chemicals and pursuing an agricultural system that eliminates waste; and protecting Japan from foreign influences through the enactment of legislation regulating purchases of goods and businesses by non-Japanese actors and restricting foreign workers.

Its website says the party “does not receive any support from religious groups or political organizations.”

The popular party design is a big draw for supporters. It offers four levels of membership, some of which have more influence internally.

A party member paying a monthly membership fee of 1,000 yen ($7.30) receives a daily audio recording and column to read.

But if individuals pay a 4,000 yen monthly fee, they become eligible to vote on the policy measures compiled at party policy-making meetings.

Kodai Oka, 43, a company employee in Saitama Prefecture who joined the party in January, said Sanseito’s appeal is that he can get involved in decision-making and party management. .

A local branch of the party selects its candidate for election after a discussion. But the candidate must then be approved in a vote involving all party members.

Sanseito also clarifies that his campaign promises are “for party members, not the general public.”

The party allows a policy measure drafted by any member to be submitted for approval to the party’s higher decision-making process, according to Oka.

“It’s democracy that we learned in middle school and high school,” he said.

He decided to pay the 4,000 yen monthly fee and volunteer his time to help the party’s campaign for the Upper House elections.

(This article was written by Eishi Kado and Taishi Sasayama.)