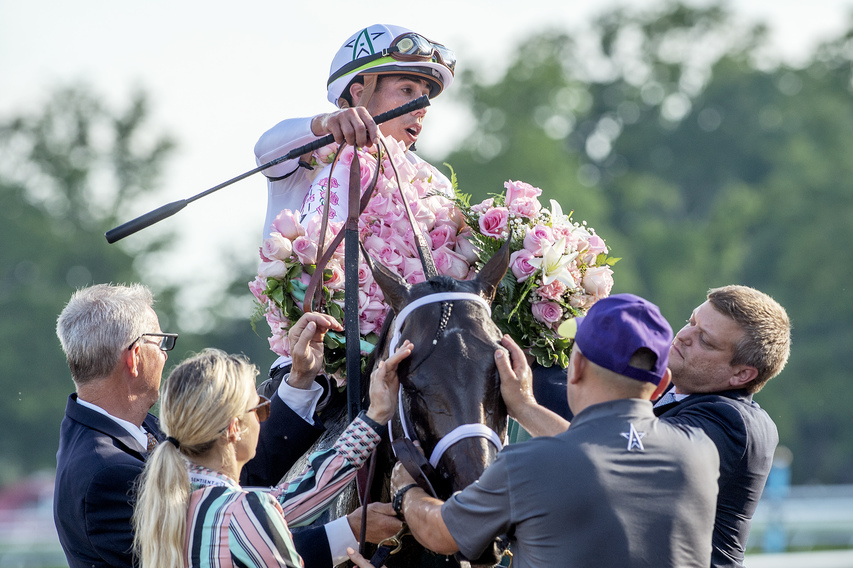 Life Is Good has only run over a mile four times in its career and has only run a mile and a quarter once, but after winning the mile and an eighth Whitney at Saratoga Racecourse on Saturday , trainer Todd Pletcher said they’re leaning towards the longer of the two races at the Breeders’ Cup.

It would be the mile and a quarter BC Classic at Keeneland on November 5, instead of the BC Dirt Mile, which Life Is Good won last year.

Naughty Gal had never set foot on the main track at Saratoga Racetrack until the Adirondacks on Sunday.

She got her money’s worth from the first tour.

Fanning 10 ways away from the inside rail exiting the bend, she and jockey Luis Saez raced over terrain that rarely sees footsteps during a race, but she was still good enough to overcome that super wide move to win the 200,000 race. $ Grade III for 2 year old fillies by 2 1/2 lengths.

Trainer Wesley Ward’s excellent weekend at Saratoga Racecourse began on Friday, when his turf sprint star Golden Pal won Grade III Troy by a head, after being bet 1 -2 on the morning line at 1-5.

Matareya, on a four-fight winning streak by a total of 22 1/4 lengths, started at identical odds in the Grade I test for 3-year-old fillies on Saturday.

But she finished third, and it was Ward’s 17-1 long shot Chi Town Lady who pulled off the huge upset as he was mounted by the scorching Joel Rosario.

“In memory of Allan Carter, a trusted friend and treasure of horse racing history,” by Teresa A. Genaro

Paula Curtis-Carter stood in front of the dozens gathered at the Principessa Elena Society in Saratoga Springs on Thursday. She held up a mug containing a few fingers of Guinness, preparing to toast husband Allan Carter, who died in April.

Before spending 15 years as a historian at the National Museum of Racing and Hall of Fame, before spending 30 years as a law librarian at the New York State Library in Albany, Carter had joined the United States Army, learning Russian during an intensive nine-month internship. language program before being posted to Japan.

A man from Glens Falls, grilled in Russian and Japanese, with an Irish beer. And it only begins to tell the multifaceted story of a man whose name has become locally synonymous with racing history.

Her name did not appear in the 2012 Saratoga sale catalog, but only because she did not yet have a name.

He appeared on hand-printed T-shirts by fans. And according to one woman’s Twitter account, the name ended up on her baby’s birth certificate.

On Friday, he finally appeared on a plaque at the National Museum of Racing Hall of Fame.

The popular Tepin joined Beholder as the only inductees in the contemporary category as the Hall of Fame celebrated the class of 2022 at Fasig-Tipton’s Humphrey S. Finney Pavilion.

“Chat on the track with… David Aragona,” by Will Springstead with photos by Erica Miller

David Aragona is what you might call a numbers and rhythm guy.

As a double major in computer science and music at New York University, Aragona found a way to work in both music – Carnegie Hall, in particular – and horse racing before settling in the horse races.

“I use one or the other very little these days,” Aragona said, laughing, of his two majors.

He currently works for the Daily Racing Form as an analyst for TimeformUS, where he basically analyzes races to suggest horses and things for the public to watch. He is also the lineman for New York Racing Association tracks.

“Borisenok, Brown Road Racing encourages women to get involved in Thoroughbred ownership,” by Teresa A. Genaro with photos by Erica Miller

Michelle Borisenok may have raised a few eyebrows with her comments at a conference for new and existing racehorse owners last week.

“It’s not so much about winning,” she said of Brown Road Racing, a partnership she founded in 2018. “For us, it’s about education and experience.”

A week later, speaking on her farm overlooking Lake Saratoga, she elaborated on that mission.

She created Brown Road Racing to attract and educate women about the experience of Thoroughbred ownership, a natural progression from the women’s leadership work she has been doing for decades. A graduate of the College of Saint Rose in Albany, she is an honorary member of the college’s Women’s Leadership Institute, to which she and her husband Walt donated $1.2 million to renovate the Institute’s headquarters in Albany, which bears now the name of Michelle Cuozzo Borisenok ’80. Accommodation. Among the building’s uses is housing for BOLD Women’s Leadership Network Fellows. Through centers at six Northeast colleges, BOLD “cultivates courageous leadership” for students and graduates at member institutions.

~ Sign up for the Daily Gazette Equine Disability Newsletter ~

CHOICES OF THE DAY

More from The Daily Gazette:

Categories: On the track, Sports