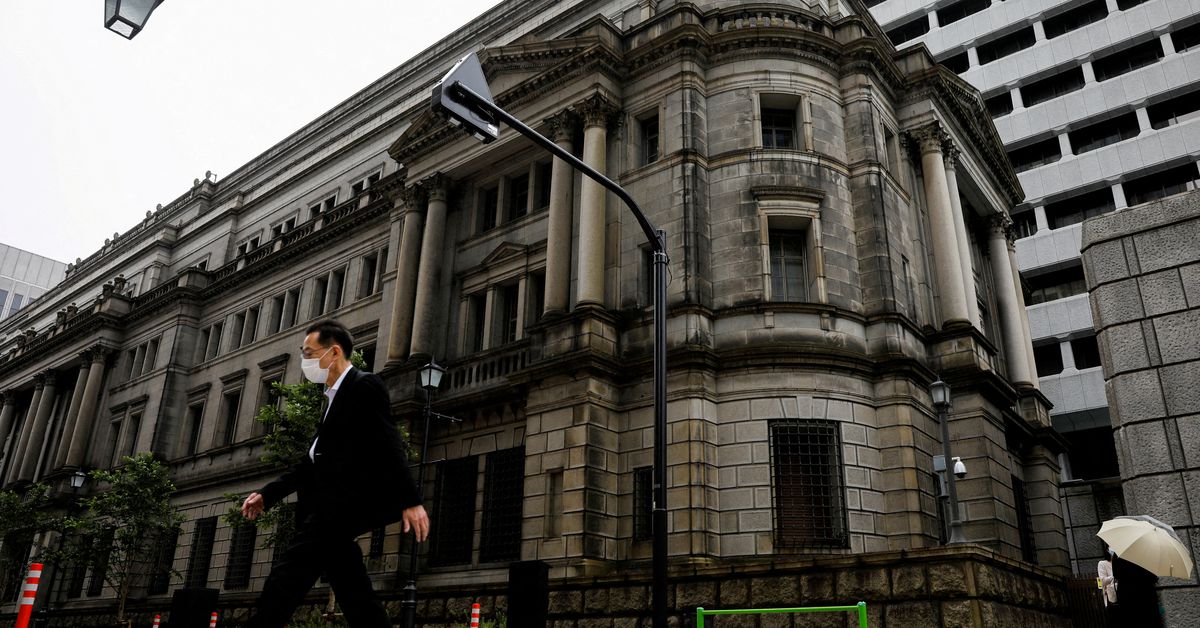 A man wearing a protective mask walks past the Bank of Japan headquarters amid the coronavirus disease (COVID-19) outbreak in Tokyo, Japan, May 22, 2020.REUTERS/Kim Kyung-Hoon/File Photo /File Photo

TOKYO, April 20 (Reuters) – The Bank of Japan stepped up its efforts to defend its yield target on Wednesday, making a new offer to buy an unlimited amount of 10-year bonds for four consecutive sessions.

The move comes as the JGB’s 10-year yield remained at 0.25%, the upper limit of its target of around zero percent, throughout Wednesday despite the central bank’s offer to buy. an unlimited amount of 10-year bonds at this rate. .

“Given recent movements in yields on longer-term bonds, we have announced an unlimited consecutive purchase of fixed-rate bonds to achieve our policy of guiding the 10-year yield around 0%,” the statement said. BOJ in a statement.

The rise in yields comes as the yen weakens sharply to a two-decade low against the U.S. dollar amid relentless widening of Japanese and U.S. rate spreads, prompting markets to test commitment from the central bank to its super-easy yield curve control policy. Read more .

The benchmark 10-year Treasury yield hit its highest level since late 2018 at 2.981% in Tokyo on Wednesday.

“The Bank of Japan has no choice but to continue offering unlimited JGB purchases,” said Takafumi Yamawaki, head of Japan fixed income research at JPMorgan Securities.

“If the central bank allows 10-year bond yields to continue to rise, its message to the market would become unclear.”

The BOJ predicts that it will allow the 10-year yield to move smoothly around its 0% target as long as it remains below the upper bound of 0.25%.

The BOJ accepted all of the 225.1 billion yen ($1.75 billion) in offers it received in Wednesday’s operation.

The bank had also offered to buy unlimited amounts of 10-year bonds at 0.25% in February and made four consecutive days of offers in March.

With Japan’s economy still weak and inflation subdued, the BOJ underscored its determination to maintain ultra-accommodative policy even as the US Federal Reserve looks set to hike rates aggressively to stem soaring prices.

BOJ Governor Haruhiko Kuroda said on Monday that the yen’s recent moves had been “quite abrupt” and could hurt companies’ business plans, offering his strongest warning yet about the risks stemming from the currency depreciation. Read more

Finance Minister Shunichi Suzuki was more adamant on Tuesday, warning that the damage to the economy from the current weakening yen outweighs the benefits. Read more

The yen fell to nearly 130 to the dollar on Wednesday – a level not seen in two decades – raising the risk of direct intervention, where the central bank would buy large amounts of yen on the open market with its foreign currency reserves. . Read more

The last time Japan stepped in to support its currency was in 1998, when the Asian financial crisis triggered a sell-off in the yen and a rapid outflow of capital from the region.