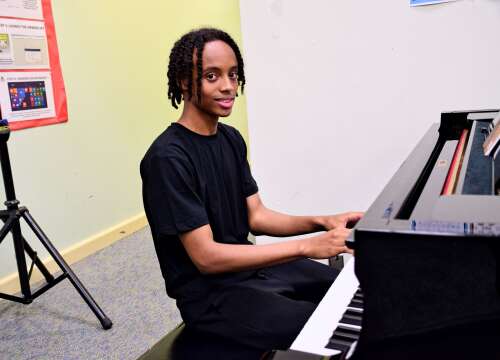 Dennajye teaches himself to play the right notes – The Royal Gazette

Inspired by the classical music of Japanese cartoons, Dennajye Paynter taught himself to play the piano.

In just five months, he mastered Rondo Alla Turcaa composition by Mozart that most people take years to learn.

“They play a lot of classical music in anime and I’ve always liked classical. I wanted to play some of the intros on those shows,” he said.

“I had never played musical instruments before. I don’t have an instructor. I didn’t study music in school, so I can’t read sheet music.

Dennajye, who is now a graduate of the Berkeley Institute, bought a keyboard and then pulled out music books from the school library.

“I also watched a lot of tutorials on YouTube,” the 17-year-old said. “I taught myself to play by ear.”

He started with the complex music he heard on his favorite shows, naruto, Bleach, A play and The attack of the Titans.

He mastered the technique in two and a half weeks.

“It came naturally to me,” he said. “Once you’re passionate about something, it comes fast.”

He was eager to move on and approached John Woolridge, the Berkeley music teacher.

“I had never touched a real piano before. So I started playing the beginning of Rondo Alla Turca.”

Impressed, Mr. Woolridge invited him to “come from time to time to train”.

Dennajye joined a small community of students who gathered in the music room over lunch.

“Either they teach each other the works of Debussy, Beethoven and Mozart, or they do a jazz and blues jam session,” Mr Woolridge said.

Switching from a keyboard to a real piano was a radical change for Dennajye.

“I didn’t expect the keys to be so heavy on a piano,” he said. “My fingers had to adapt to the game. They hurt at first, but as you get used to them your fingers develop more strength.

But there were also advantages.

“Pianos have pedals,” he said. “With this you get a much richer sound.”

His friends were surprised that he never had a class.

“They didn’t believe me at first,” Dennajye said.

Mr Woolridge added: “He is constantly training and adding to his repertoire. Playing [Rondo Alla Turca] is a colossal task. He mastered this in months rather than years.

He invited Dennajye to perform at a celebration held at the school in May honoring Florenz Maxwell and his book, girlcott.

He “felt a burst of joy that lasted three or four days when” he conquered the song but was nervous when he sat down to play it in front of the 60-plus audience.

“When I play, I can’t hear the notes very well,” he said. “I’m so focused that I can’t hear people talking. I thought I gave a mediocre performance. I thought I hadn’t played hard enough. People were cheering, but I thought it was a shame.

Thirty seconds after he sat down, people were still clapping. When a teacher told the crowd he was self-taught and only started performing in January, “they clapped even louder.”

Nerves struck again when he was asked to play at the Berkeley Educational Society luncheon for this year’s graduates because he was “playing for people I actually knew.”

But this performance went well too.

One of his challenges has been finding the time to train.

“I had school and a job,” he said. “So that left me about two hours a day to do whatever I wanted.”

He divided his time carefully, giving himself exactly half an hour to practice on his keyboard. He also gave himself 30 minutes for his other passions, video games and Japanese cartoons and comics.

Dennajye is heading to Bermuda College in September to study computer science but isn’t quite sure what he wants to do with his life.

“I’m interested in computers, but it’s not my main passion,” he said. “I want to become a psychologist, a computer scientist or an entertainer. Anywhere in this area would be decent.

One day he would like to get proper piano training.

Faced with the redevelopment, Koenji stands up