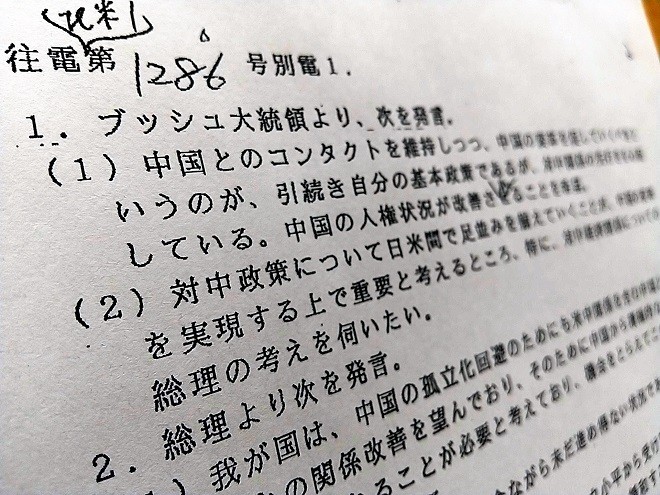 Talks between US and Japanese leaders in 1990 following the Tiananmen Square crackdown show that even 30 years ago Western nations were concerned about human rights issues in China, aaccording to recently declassified documents.

Talks between Washington and Tokyo describe their struggle to mend ties with China and predict the future of the Chinese Communist Party, a year after Beijing resorted to force to contain the pro-democracy movement.

The material is part of diplomatic documents released by the Japanese Foreign Ministry on December 22. Under the Disclosure Program, confidential documents are released annually after 30 years.

In March 1990, US President George HW Bush and Japanese Prime Minister Toshiki Kaifu opened their talks with a topic involving Beijing over dinner at the Japan-US Summit in Palm Springs, California.

According to the declassified documents, Bush expressed concern about the future prospects and stressed the importance of cooperation between Washington and Tokyo while reaffirming his basic policy of keeping contact with China while calling for reforms. .

In response, Kaifu spoke of Japan’s intention to work to improve relations between China and Western countries, including the United States, so that Beijing is not isolated in the international community.

“For the purpose, it will take a positive message from the Chinese side,” Kaifu said. “We explain this (in Beijing) on ​​occasion.”

At the time, the US Congress and European nations harshly castigated China’s bloody crackdown on student protesters in Tiananmen Square in June 1989, provoking antipathy from Beijing, which called the incident “domestic politics“.

Tokyo and Washington debated whether they should continue to offer support to China in order to urge its leader, Deng Xiaoping, to maintain his economic reforms and open-door policies. Kaifu called it “impossible to go ahead with a new round of yen loans to my great regret” during the bilateral meeting.

The Chinese side had failed to deliver its “message” in response to concerns raised by Japan, the United States and Europe over human rights issues in that country.

Bush speculated that the collapse of the Romanian administration of Nicolae Ceausescu probably had a serious impact on decision-making in China, while Washington had believed, based on some private comments from Deng, that Beijing would relax its restrictions on human rights.

Bush held talks with Soviet General Secretary Mikhail Gorbachev to declare an end to the Cold War in early December 1989. However, the Romanian government which had long survived the wave of democratization in Eastern Europe was overthrown more later that month, apparently putting the Chinese Communist Party on high alert.

Bush also spoke of counter-arguments coming through a “private” channel from the Chinese side.

According to Bush, Beijing retaliated, saying students and workers tried to invade the state leadership residential area during the Tiananmen incident and asking what Washington would do if the same actions happened around the White House.

Bush said Beijing criticized Washington by referring to National Guard personnel shooting dead several students during an anti-war demonstration in the United States in the midst of the Vietnam War.

Along with the Tiananmen crackdown, US-China tensions had escalated over the manipulation of anti-establishment physicist Fang Lizhi, who took refuge at the US embassy in Beijing after the incident.

During the Japan-US dialogue, Bush suggested a point of compromise, noting that Washington would take friendly action if China implemented one or two measures, such as resolving the Fang issue and releasing detained student protesters. .

Bush added that he expected these small changes to eventually lead to Zhao Ziyang’s return to power as well as Jiang Zemin’s deviation from Li Peng. These elements were supposed to help create circumstances in which Washington and Beijing could melt the ice.

When the Tiananmen incident happened, Li was involved in the crackdown as prime minister under Deng. The reformist Zhao was ousted as general secretary of the Communist Party, and Jiang resumed his role.

The US president’s remark reflected his hope that the US decision to ease economic sanctions in exchange for China’s resolution of human rights issues could lead to a more moderate administration in the country. the Asian nation.

Towards the end of their talks, conversations between Bush and Kaifu seemed to point to China’s bleak future as Deng’s presence in Beijing politics wanes.

Following the meeting, Bush in May 1990 decided to continue listing China as one of the United States’ most favored trading partners. Beijing allowed Fang to leave China in June. Kaifu announced in July the lifting of the freeze on yen loans stemming from the Tiananmen crackdown.

Under such circumstances, China stuck to its economic reform and opening-up policy to achieve rapid growth thereafter.

Despite all this, as what has been reported more recently in Hong Kong and Xinjiang shows, Beijing’s stance of not listening to the views of other states while labeling its human rights abuses as “the domestic policy” has never changed.

The first landmark resolution in 40 years passed by the Communist Party in 2021 called the Tiananmen incident a “serious political unrest” and noted, “With the support of the people, the Party and the government have taken a clear stand against the unrest, defending China’s position. socialist state power.

Ryo Sahashi, an associate professor of international politics at the University of Tokyo, said the United States maintained its policy of “engagement” after the Tiananmen incident.

“Washington continued negotiations (with China) to prevent the situation from escalating further, because cooperation with China is essential with the Soviet Union in mind,” Sahashi said. “He kept trying to improve his relations with China.”

According to Sahashi, this position reflects the deep-rooted expectation of successive US administrations that China would move in the right direction if its leader was replaced.

“These records show that President Bush valued Deng Xiaoping as a reformist even after the Tiananmen crackdown,” Sahashi said. “Bush was clearly trying to work closely with Prime Minister Kaifu, believing that reaching out to Deng’s successor, Jiang Zemin, would lead to an improvement in human rights issues.”

Sahashi pointed out that the document indicates that Washington believed at that time that it would still be able to reach a compromise with Beijing on human rights issues.

He described the documentation as “valuable” because actions typical of Washington’s policy of engagement with China were detailed in the records.

Explaining the importance of the documents, Sahashi said, “Diplomatic documents are basically declassified 30 years after they were created in Japan and the United States. Washington was once more active in disclosure than Tokyo, but Japan currently has strong momentum. They are significant for looking at contemporary history from different angles.

This article is part of a series of stories based on diplomatic documents declassified by the Japanese Foreign Ministry in December 2021.

VOX POPULI: Our public limited company does our names no favors