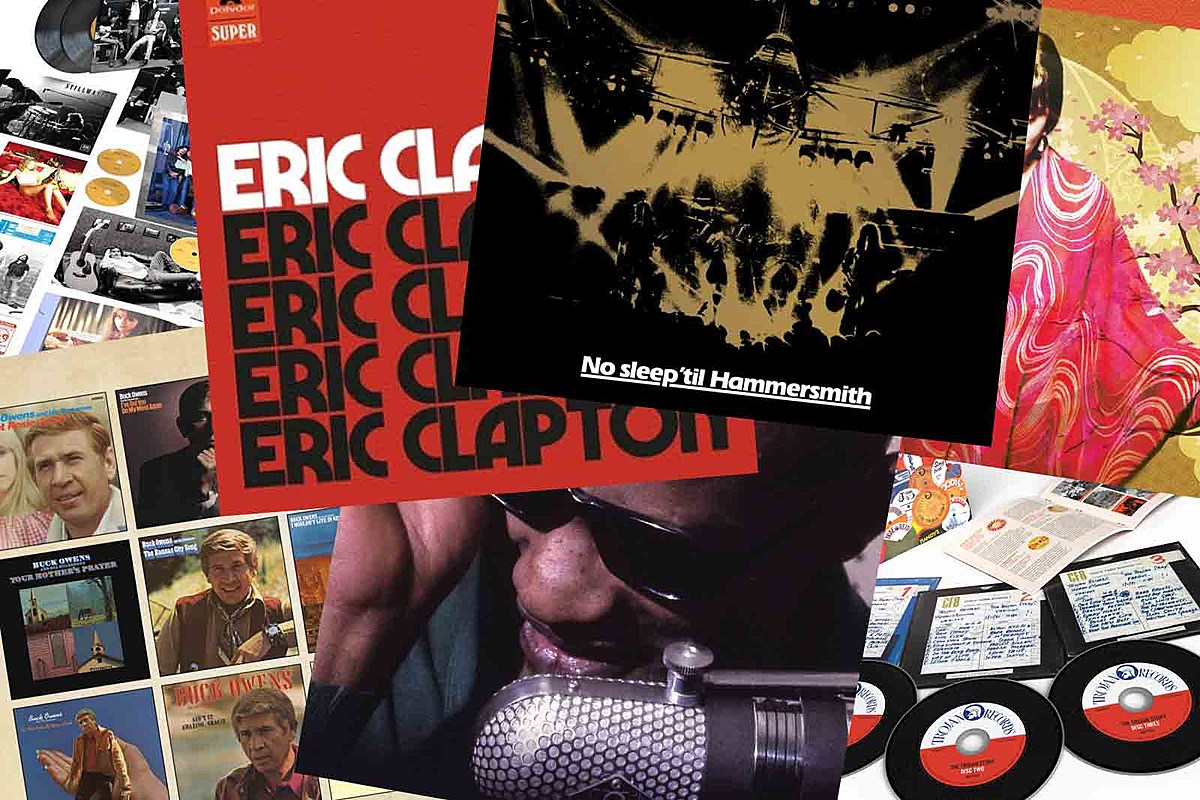 Summer is usually the time for new albums, not reissues, bulky box sets, and extended archive versions. Things usually pick up in the fall, when most people are gearing up for the holiday season with these often expensive, fan-oriented collections.

Still, the past three months have seen some superb reissues and archival sets for fans of all genres, including a new box from R&B legend Ray Charles, an expanded album by Eric Clapton, a record by rare concert by singer-songwriter Laura Nyro, a chunky-up version of one of Motorhead’s best albums, an expanded edition of the soundtrack to one of the most popular rock’n’roll movies of the 25 years and a revised version of one of the greatest reggae compilations ever released.

The seven sets detailed below in our summer 2021 re-release rundown are not for the curious. Each release penetrates deep into a specific era or style – Charles and reggae boxes aren’t final and really don’t aim to be – while also covering more than the hits and favorites you’d expect.

And that’s pretty much the key to the reissues below. They offer extensions and further explanation of what made artists or, in a few cases, a particular style of music so important back then and why they are still so important today.

What it is: Not quite the promised “Ultimate Ray Charles Collection”, as none of his flagship documents from the 1950s on Atlantic are here. But the great R&B continued to make excellent records after that time. These are the ones we find on this box of six discs.

What’s on it: After his split from Atlantic in the early 1960s, Charles went on to make classic LPs like Genie + Soul = Jazz and two volumes of Modern sounds in country and western music. This period rightly gets ample space here.

Best song you know: “Georgia on My Mind” and “Hit the Road Jack” were big hits and rank among Charles’ all-time greats. They come early True Genius, which ends up culminating in subsequent duets with Billy Joel and Norah Jones.

Best Song You Don’t Know: Unpublished songs from a 1972 concert in Stockholm make up the final record, and they are an excellent reminder of Charles’ legacy. He rips with force the first hits “What’d I Say” and “I’ve Got a Woman”.

What it is: Clapton’s debut solo album, from 1970, receives the deluxe treatment in a four-CD and one-LP box that highlights the record’s various mixes, including the British original by Tom Dowd and another by Clapton himself. same.

What’s on it: The mixes will attract longtime fans to Eric clapton, but it’s the singles, alternate versions and session takes record that has the most appeal here. Delaney and Bonnie Bramlett and the great saxophonist King Curtis make appearances.

Best Song You Don’t Know: Clapton’s LP mix was never heard in its entirety (only one song was incorporated into the Dowd-oversen original), so his version of his favorites like “Blues Power” is personal. The 10-minute “Blues in ‘A'” release jam keeps its promises.

What it is: This concert album was only released in Japan in 2003, six years after the Bronx-born singer-songwriter died of ovarian cancer. The 21 career-spanning songs are mostly from a 1994 performance at Kintetsu Hall, along with others from On Air West.

What’s on it: In addition to their own songs (like “And When I Die”, “Save the Country” and “Wedding Bell Blues”), the Rock & Roll Hall of Famer covers classics like “Dedicated to the One I Love”, “Ooh Baby Baby “and” Walk on By “. All of them are exquisite.

Best song you know: Unless you picked up Living in Japan As an import in the 18 years since its release, these versions are probably brand new to you. Nyro’s covers on “And When I Die” and “Wedding Bell Blues” remind you of his greatness.

Best Song You Don’t Know: The opening cover of “Dedicated to the One I Love” by Les Shirelles is reminiscent of his classic 1971 album with Labelle, Go do a miracle, in which the artists teamed up to pay homage to some of their favorite songs from the early ’60s.

What it is: Motorhead’s 1981 concert album wasn’t just a quick cashout; it helped establish the band’s fan base among punks, metalheads, and old-school rock ‘n’ roll fans. This 40th anniversary set develops that room-shaking sound.

What’s on it: The original recording has been remastered and extended with more songs including soundcheck recordings. The best part: The three shows that Black-smith was shot (none actually in Hammersmith) are here in their entirety.

Best song you know: Classics like “Ace of Spades”, “Overkill” and “Bomber” were among the highlights of the 11-song LP. These are still the must-have pieces in this four-disc set. And yes, there are four killer versions of each to choose from.

Best Song You Don’t Know: The bonus tracks expand the set list a bit, but an already released “Train Kept A-Rollin ‘” and an unreleased soundcheck recording by Overpowered“Limb From Limb”, none of which has done the shows, is fiercely fast and awesome.

What it is: Nine albums by the late country legend, recorded between 1968 and 1974, in a newly remastered form, update these recordings for digital formats for the first time. The sound is pristine, like many of the times, although some of the music may be dated.

What’s on it: Owens helped create the sound of Bakersfield in the early 1960s, when his records consistently reached No. 1 on the country charts and won him fans like the Beatles, who covered “Act Naturally”. This last period has not been so stable.

Best song you know: “Tall Dark Stranger”, from the 1969 album of the same name, reached number 1. As did “How Long Will My Baby Be Gone” (Sweet Rosie Jones) and “Made in Japan” (In the palm of your hand). Other LPs also had Top 10 hits.

Best Song You Don’t Know: None of the re-releases are extensive, so no bonus tracks here. But since they’re all debuting on CD, most of the deep cuts are probably unfamiliar. Check out his 1974 cover of the Rolling Stone.

What it is: The soundtrack to one of the best rock movies of the 21st century is getting a major overhaul. Five CDs include demos from the fictional band from the film Stillwater and excerpts from Nancy Wilson’s original score of Heart. Oh, and a lot of classic rock.

What’s on it: Songs from some of the biggest and best artists of the era are here, including the Allman Brothers Band, David Bowie, Jimi Hendrix, Led Zeppelin, the Who, Yes and Neil Young. It’s a great playlist on its own, while also serving as a movie promo.

Best song you know: Really, pick any track here, but it’s Elton John’s “Tiny Dancer” who got new life in Almost known thanks to a famous scene in which an entire tour bus erupts into a merry song, which stands out. A truly iconic cinematic moment from the 2000s.

Best Song You Don’t Know: New versions of “Amazing Journey / Sparks” by Who, “Reelin ‘in the Years” by Steely Dan and “Cortez the Killer” by Young are all exclusive to this set. And some of those Stillwater demos are pretty good.

Various artists, The Story of Troy

What it is: The 50th anniversary edition of one of the first (and still the best) reggae collections revises its track list a bit to take into account some copyright concerns, but all three discs still contain some of the greatest Jamaican music never made.

What’s on it: The 1971 anthology brought together four dozen songs (it’s even 50 now) by many of the reggae pioneers on the Trojan Records list. Legends like Jimmy Cliff, Desmond Dekker, Lee “Scratch” Perry and the Maytal are all there.

Best song you know: The Maytals’ 1969 single “Pressure Drop” received a bigger boost in 1972 when it was included in the groundbreaking film. The more they come soundtrack. It remains one of the greatest songs ever recorded in any genre.

Best Song You Don’t Know: Dandy Livingstone’s “Rudy, a Message to You” was a small success in 1967. A dozen years later, the Specials pretty much kicked off their careers with a slightly renown UK Top 10 cover. Inspiration is obvious.

Welcome the unexpected in Studio Ghibli’s new film, “Earwig and the Witch”