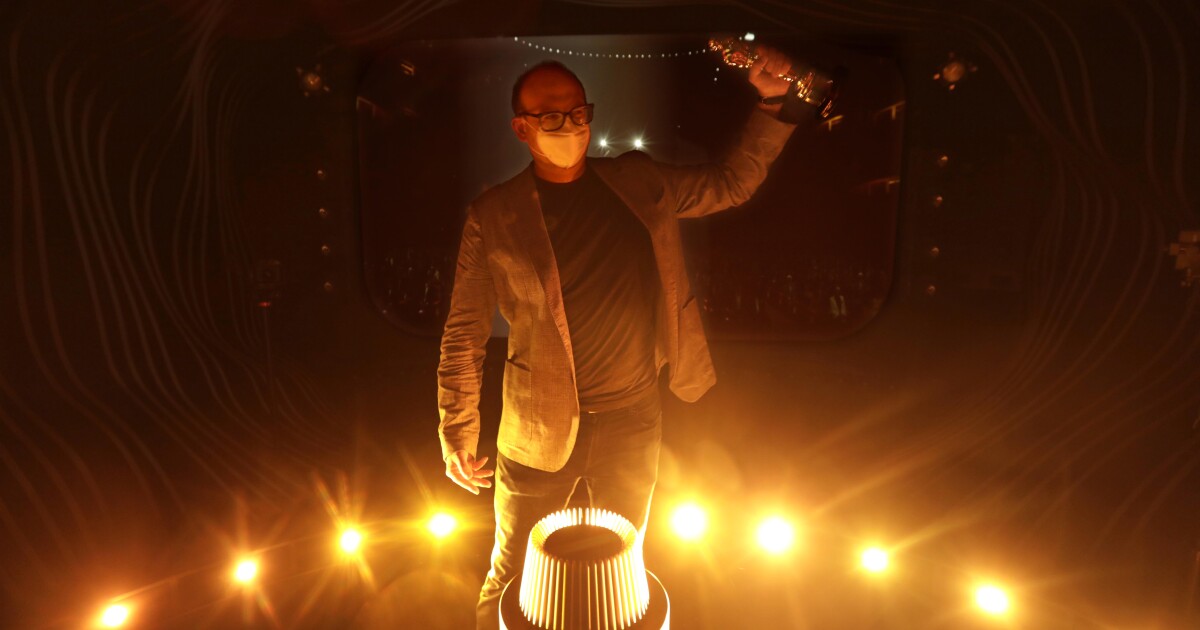 My Oscar was in sight. A producer told me where to stand. In front of me and the statuette, there was a curtain as I waited for my signal to rush onto the stage.

I didn’t write a speech – of course – but several options rushed through my head. Do I keep it safe and boring and limited to thanks? No, nobody wants that. I would definitely talk about the importance of getting the vaccine, that’s for sure. Then? The recent political events seemed worth discussing, and it would undoubtedly attract attention on social media… if I actually won an Oscar and not just pretending.

I was standing. “Congratulations,” shouted a museum Academy staffer playing the role of a producer as the audience swelled in front of me on a screen. The lights brightened and I momentarily narrowed my eyes as I searched for the Oscar. The crowd, a recording from an Oscar TV show at the Dolby Theater, seemed to only intensify as I breathed before beginning my gracious words of acceptance …

Uh-oh – now I could hear the music getting louder. But my speech! The importance of vaccines! The risk for the constitutional rights of women!

I was whisked off the stage, where the Oscar was left for the next paying guest ($ 15, in addition to Academy Museum admission, for the Oscars Experience video opportunity). My brief moment in the spotlight, a two-minute simulacrum of what is a showbiz dream to many, had come to an end. I’d be emailed a snippet of my seconds on a makeshift Oscar stage, which would have to do the trick unless my life’s fate changes.

Remember the theme park or carnival souvenir photo ops that would slap a guest’s face on a popular magazine? Think of the Oscars experience as a sleek, high-tech version, in which multiple cameras will shoot a moment with professional stage lighting that seems geared towards prime time – or at least for sharing on social media. There’s an underlying purpose of promoting the Oscars, but if the lighting and framing can make the guest glamorous, so much the better.

When the Academy Museum opens on September 30, it will feature exhibits on Oscar and film history, including a deep dive into the works of Japanese animation legend Hayao Miyazaki. But the Oscars experience is an upselling venture that brings ever-lightweight theme park elements to the museum, fostering a trend of immersive entertainment that shows that even educational institutions today need to get their messages across with a few spoonfuls of sugar.

Increasingly, any attraction, museum, or art space seems ripe for the lessons of the themed entertainment industry.

“I’ve worked in a bunch of different museums for a very long time, and what I learn – the more I work there – is that we start to adapt and evolve,” says Lauren Girard of the Academy. Head of visitor services at the museum who previously held a similar role at the Broad.

“We’re starting to recognize that people learn in different ways,” Girard says. “There are people who learn by reading, people who learn by listening and then there are people, including me, who are ‘tactists’ and who want to experience something and hang on to something. an object or pull a lever. It is a valid way to learn and explore. I’m excited about the way museums rotate rather than being like, “Let me give you some information. “

Great museums have always had a theatrical air. When I was a child, the Chicago Museum of Science and Industry occupied a space in my brain similar to that of Walt Disney World, in large part thanks to his experience in the coal mines. Here in Southern California, we’re used to fantastic, larger-than-life environments, whether it’s one of our area theme parks or the Pompeii recreations of the Getty Villa – a theme park. artistic, more or less.

The Grammy Museum allows guests to experience record production, and recently the Warner Bros. Studio Tour has been revamped with theme park-like traps, including a host of interactive ‘Harry Potter’ exhibits that wouldn’t be out of place at Universal Studios’ The Wizarding World of Harry Potter. Indeed, updates to the Warner Bros. Getaway were managed by Thinkwell, a local company known for its contributions to theme parks around the world.

Thinkwell Creative Director Cynthia Sharpe started in museum spaces over two decades ago and has seen them branch out into tech worlds in an attempt to create more complete environments today. “You can’t say we’re just going to have a white box with touchscreen kiosks,” Sharpe says of modern business and public demands. “It’s not going to fly.”

Warner Bros. Marketing Director Studio Tour Gary Soloff admits new additions to the experience, including interactive recreations of the “Harry Potter” and “Batman” films, many of which are studded with actual props amid the playful photo opportunities, could fall somewhere between a theme park and a museum, indicating that the lines of entertainment and education are blurred.

“I think you’re going to have more traditional experience makers who will be disappointed with [these newer experiences]”says Carissa Baker, an assistant professor at the University of Central Florida who writes about theme parks as artistic spaces.

“There was a different approach to designing these places in the past,” says Baker. “The artifact itself was the thing that mattered, but then we started to get into the background. What is the setting? I can’t think of a better example of this than Villa Getty. It is a thematic space. But these artifacts, in this space, seem more authentic, which is ironic, because they are authentic – but I feel immersed in this space, in a traditional environment that created this art.

If once we had to go to a Disney or Universal theme park, today more regional experiences – floor-to-ceiling installations by art collective Meow Wolf, which now has locations in Las Vegas, Santa, Fe, NM and Denver, or the City Museum of St. Louis – bring immersive story-driven experiences to a wider audience. This creates industry-wide pressure, where an exhibition that recreates the feeling of winning an Oscar, something that was once perhaps more of a play with Universal Studios or Walt Disney World’s Hollywood Studios, is now also on display. comfortable in an educational institution.

“The ambitious element created increasing expectations,” says Sharpe. “Think about what it was like to walk into a restaurant or cafe a few decades ago compared to what it is now. Our expectations have changed. It’s not just the food. This is the design. We comment on the boards, the design, the soundtrack. Our experience expectations have been raised to 11. ”

It’s no wonder, then, that Girard at the Academy Museum makes reference to Disneyland when he goes through the Oscars experience, especially the fan-made event Dapper Day, in which guests play roles in period specific costumes. Someday, she says, she hopes the Oscars experience will inspire moviegoers to come out in their most fashionable form.

“I hope visitors will embrace the theatricality of the play,” says Girard. “I would love to see visitors dress their best for the Oscars and come have that experience. It would be the dream.