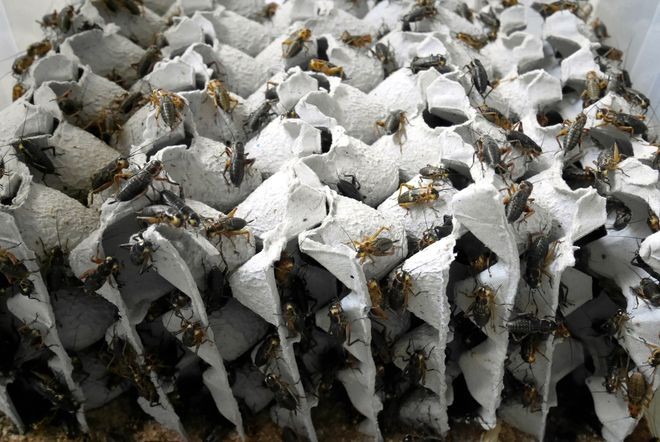 Insect farming is booming amid demand for more sustainable food

Crickets swarm on the surface of paper egg cartons in plastic containers placed on the shelves of a temperature-controlled greenhouse in Nihonmatsu, Fukushima prefecture.

For many people, these critters will soon be tasty snacks.

Even though farming insects was outside of its normal expertise, the Saitama Prefecture-based company began breeding crickets in 2017 and began shipping them in 2018.

“We seek to produce a sustainable source of food in Japan,” said Fumihiko Kojin, president of Taiyo Green Energy.

She is one of a growing number of Japanese companies getting into edible insect farming, as insects are gaining more attention as a sustainable food source.

The trend, which originally aimed to bring “unusual delicacy” to dinner tables, is supported by the lower environmental costs of growing insects compared to farming them.

According to Ryota Mitsuhashi, product development manager at Tokyo-based edible insect retailer Takeo, many Japanese companies have recently got into insect farming.

“As far as I know, at least 26 companies, including those to start cultivating from now on, are working in the cricket market,” Mitsuhashi said. “Additionally, several other companies are getting into the rearing of housefly larvae and silkworms.”

Takeo started selling domestically raised insects in 2019, and insect control products from nine farmers are now available at the store. He also started raising migratory locusts on his own in 2019 and started a joint research program with Hirosaki University in 2020.

The larvae of crickets, silkworms and black soldier flies are becoming very popular foods these days. Insects can replace beef, pork and other types of meat, which are expected to become scarce in the future due to global population growth.

The main advantage of bugs is their less impact on the environment. Insects can be reared efficiently while using much lower amounts of feed, water, and energy than rearing animals such as cattle and pigs. In addition, their protein content is comparable to that of animal meat.

Crickets are one of the main insect species cultivated in Japan. Farmers deliver their products frozen so that retailers can boil and dry them to sell as snacks. Insect growers sometimes do all the processing themselves, from drying to grinding, so they can use them as raw material for their brands’ snacks.

Takahito Watanabe, an assistant professor of developmental biology at Tokushima University who studies crickets, set up his own start-up called Gryllus Inc. in Tokushima prefecture in 2019.

Gryllus raises crickets reared on its production base in plastic clothing containers. The process takes about a month.

The company has an integrated production system allowing it to dry and powder them itself.

At the end of 2020, Gryllus developed an automated cultivation method that provides food and water, making cultivation less labor intensive. Last summer, he replaced all his food with wheat bran and other food waste generated in the country.

“Insects are not things to be consumed only by a certain group of people, but a new, more environmentally friendly source of protein,” Watanabe said. “Using locally produced food that would otherwise be thrown away for animal feed is important because it will create a new cycle (of reuse).”

But while insect farming is becoming more and more common, safety and hygiene restrictions have yet to be introduced for the industry.

Currently, it is difficult for officials and experts to get a comprehensive view of emerging businesses, such as the conditions under which farmers feed their insects and the type of food given to them.

A Council for Public-Private Partnership in Food Technology task force, established by the Department of Agriculture in 2020, plans to begin developing regulations for the fledgling industry.

The rules would serve as guidelines for the public and private sectors. Although the restrictions are not legally binding, they aim to provide consumers with a sense of security by installing quality control measures.

“Safety will be ensured by breeding insects with proper methods based on scientific evidence,” said Yasuhiro Fujitani, head of the task force and senior official of the Environment, Agriculture Research Institute. and Osaka Prefectural Fisheries. “We will identify possible challenges moving forward with consideration.”

The working group is made up of experts specializing in animal husbandry and agriculture, as well as managers of companies involved in the cultivation and sale of insects.

The Ministry of Agriculture will confirm whether the proposed rules comply with the laws.

“Countermeasures against infectious diseases, for example, will be needed for insects, as will precautions taken to prevent livestock from transmitting disease,” said Yoshiki Matsumoto, associate professor of animal science at Kagawa University, member of the working group.

“Ensuring the safety of the food to be provided will also be important. A culture of collecting and eating insects is well established in Japan, so experiences in these areas will prove useful.

The Ongoing History of New Music, Episode: 939: The Rock’n’Roll Tattoos