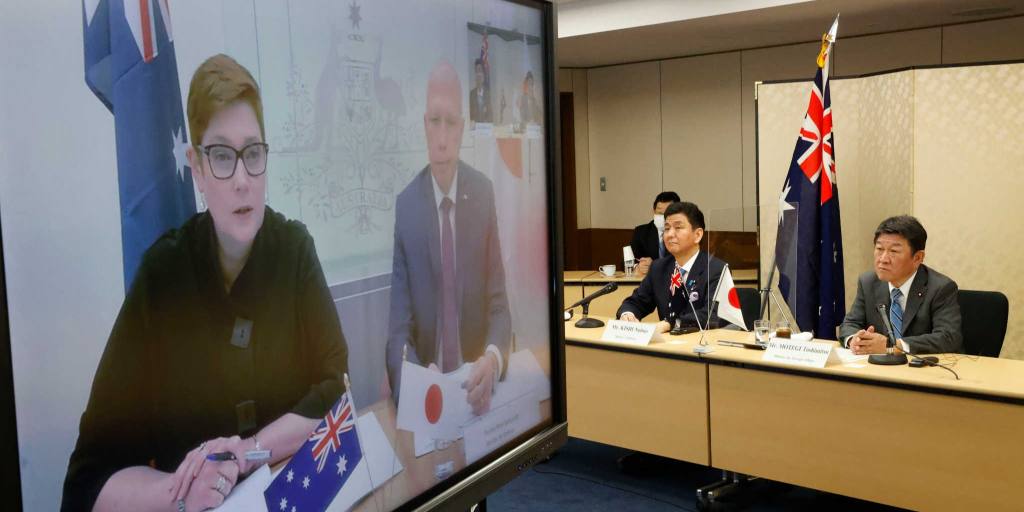 
TOKYO – Japan and Australia stressed “the importance of peace and stability across the Taiwan Strait” in a statement Wednesday following a meeting of their defense and defense chiefs. diplomacy, emphasizing the security cooperation between two US allies on the front lines of deterrence against China.

Japanese Foreign Minister Toshimitsu Motegi and Defense Minister Nobuo Kishi held virtual talks with their Australian counterparts Marise Payne and Peter Dutton. It was the first two plus two meeting of the two nations since October 2018 and the ninth of its kind between Tokyo and Canberra.

It was the first mention of the Taiwan Strait in a statement by the foreign and defense ministers of the two countries. The strait appeared in a joint statement in April by US President Joe Biden and Prime Minister Yoshihide Suga and is expected to be written in an upcoming Group of Seven statement, as countries seek to curb Beijing’s growing military pressure on Taiwan.

Officials expressed “serious concerns” about the situation in the East and South China Seas, citing “unilateral” attempts to “change the status quo” by apparently referring to Chinese activity. They also noted “concern” over legislation passed by China earlier this year that turned Beijing’s coastguard into a quasi-military force and granted it broad powers.

On the security cooperation front, ministers confirmed that the Japan Self-Defense Forces are authorized to protect Australian Defense Forces assets under a new framework, making Australia the second country allowed to benefit such protection after the United States, Japan’s only ally.

The SDF is “ready to provide protection” in this context “at the request of the ADF, whenever the opportunity arises,” the statement said.

The two countries also said they will speed up their efforts to sign a reciprocal access agreement, which will reduce the red tape involved in bringing forces from one country into the other for exercises and joint operations. An agreement in principle was reached in November.

Can the Japanese government cancel the Olympics? Yes, it is possible – Monash…