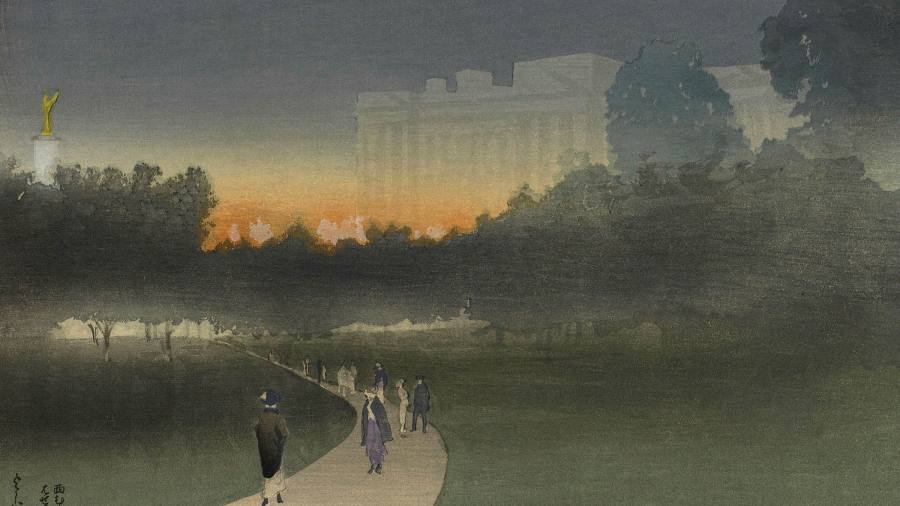 Japan: Courts and Culture — Politics and Bling at Buckingham Palace

On May 9, 1921, George V hosted a state dinner for Crown Prince Hirohito at Buckingham Palace – the first time a Japanese heir had “ever left his native shores”, according to the king’s toast. Consumed Imperial and lamb chops oriental style were on the menu, and the day’s musical program included, with exemplary British diplomacy, a selection of Puccini Lady Butterflyan opera about an American who impregnates and abandons a Japanese woman, who then dies by suicide.

Two days later, the crown prince, dressed in a Western white tie and sparkling patent leather shoes, with a belt across his chest, posed for a photo at a banquet at St James’s Palace. He looks a little uncomfortable, standing next to the haughty, heavily medal-winning Prince of Wales and two older gentlemen with flower mustaches. But there’s more to the costume: he’s here on equal footing, spatially and visually, with the British heir to the throne, reflecting and even adding to Japan’s international clout.

The music and photography programme, exhibited from the Royal Collection at Japan: courts and culture at the Queen’s Gallery at Buckingham Palace, accurately capture the contrasting desires of the two island empires at a fervent stage in their relationship. Britain enjoyed a patina of Japanese culture, whether authentic or filtered through Western lenses, while Japan’s thirst was to learn, assimilate and embrace the aesthetics of royal court of a world power.

The exhibition features choice objects from royal ownership, but is understandably unbalanced when it comes to representing Japanese art forms: there are a lot of ceramics, armor and lacquered objects, things that are resistant, that travel well and that last, but no kimono. or calligraphy. One of the most striking objects is a late 19th-century embroidered folding screen, given to Queen Victoria for her Diamond Jubilee in 1897, whose sepia-toned silks give it the eerie look of a photograph.

To be fair to Britain, for a long time she could only imagine Japan. The Shogun’s policy of sakoku, which limited Japanese citizens’ contact with the rest of the world, in effect prohibiting leaving the country on pain of death, lasted more than 200 years from the 17th century until American gunboat diplomacy forced an opening. Most Japanese goods then reached the British royal family by circuitous routes, relying on the few foreign traders admitted to Japan, and were often bastardized along the way.

The first gallery of the exhibition offers several good—I mean bad—examples. While Japanese artisans in Arita, a mecca for fine china, polished their own bowls and jars (a jar with a ceramic plum blossom applied in relief is notable), Europeans felt they lacked a certain bling and mounted them on golden plinths. , gave them gilded bronze handles or applied sparkling lion-headed adornments. George IV was a particular fan, during his 10-year reign from 1820, not least because they were best suited to his extravagant Brighton Pavilion, where individual Asian cultures were subsumed into his mishmash of “the East”.

By the end of the 17th century, Marie II had, thankfully, better taste, and a small pair of ox-shaped incense burners enamelled in pale green celadon say a lot more while shining a lot less.

The nature of the British-Japanese royal relationship – and the quality and type of items available to be displayed here – developed from the 1850s, when the weakened shogunate recognized it needed a commitment internationally and diplomatic exchanges have begun. The British were not left out to head for the districts of Tokyo. In 1869, Prince Alfred, second son of Queen Victoria, was the first foreign royal visitor to Japan. Reciprocal visits and accompanying gifts followed over the next 50 years.

There was, of course, plenty of armour, shocking in its sophistication and intricacy, its elegant materials contrasting with the clanking ironwork the British were familiar with. A suit of armour, given by the late 19th century Emperor Meiji to Prince Alfred, is rich in carved gilt copper, black lacquered iron and blue silk brocade. But all is not as it seems: pieces from three separate costumes went into the making of this one. Likewise, it is piquant to give samurai equipment as gifts, just as the special status of samurai has been abolished in him. The Japanese royal family is playing up to what the British expect, the seduction of the past.

What the Japanese received from the British is equally telling. In a cabinet opposite the picture of the crown prince is a display of honours, including the insignia of the Order of the Chrysanthemum, invented by the Meiji court after the model of European courtly decorations, such as the British Order of the Garter. On a silk belt, red in the center, blue on the edges, hangs an enamel medallion, a geometric star around the rising sun, surrounded by yellow chrysanthemums, the imperial flower.

There was a frenzy of such awards to British princes and, in return, from the Garter to the Japanese royal family. These tropes of European royalty went well with Japan’s other Western adoptions: not just ceremonial attire for the court, but means to modernize its military and economy, which it did at lightning speed.

It is in these consciously intercultural shifts that the show becomes most intriguing or revealing. An enamel box presented to the Prince of Wales (later Edward VIII) in 1922 contains the British Royal Coat of Arms, complete with a delighted lion and unicorn. A woodcut by Makino Yoshio shows a ghostly Buckingham Palace glowing behind the dark trees of Green Park. And the visit card of a Japanese delegation to the UK in 1862, dressed in traditional dress in a Victorian-style studio setting, are sensational embodiments of tension.

The Victorian royal family were not the only ones to be fascinated by Japanese art: in the 1870s, the japonism the style exploded among European artists, including Van Gogh and Monet, inspiring a taste that spread to department store wares and private homes. The royal family played their part, loaning acquisitions to an exhibition at the South Kensington Museum in 1872; 30,000 people visited the first week. While the royal family preferred the real thing, rather than japonismthey had generated their own Anglo-Japanese hybrid.

A cross-cultural moment deserves special mention. In 1881, Princes Albert Victor and George of Wales arrived in Japan, a visit commemorated in the show by an open leather-bound photo album with views of Mount Fuji. What you can’t see on the show is that George, the future King George V, had a dragon and a tiger tattooed on his arm to commemorate the trip. That’s not a bad way to interpret the British royal family’s understanding of Japan: enduring, yet profound.

Can Tho and Japan discuss economic cooperation | Business