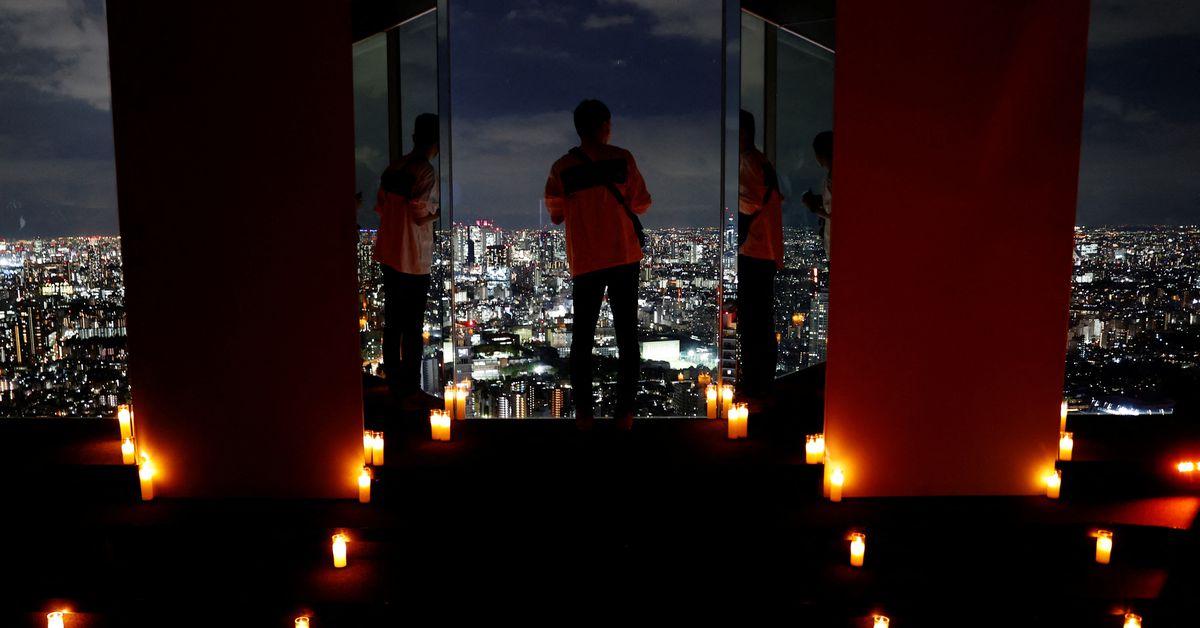 Visitors take photos with Tokyo’s night view during the ‘Totally Dark’ event, in which all electric lights are turned off and candlelight is used instead, at the Sunshine City Observatory after the easing of COVID-19 controls, in Tokyo, Japan, October 15, 2021. REUTERS/Kim Kyung-Hoon

YOKOHAMA, June 26 (Reuters) – The Japanese government warned on Sunday that electricity supplies would be strained in the Tokyo area on Monday, urging people to conserve energy as scorching summer heat hits the capital.

In Tokyo and eight neighboring prefectures in eastern Japan, excess generation capacity will fall by up to 3.7% for half an hour on Monday afternoon until 5 p.m. (0800 GMT), according to published estimates. by the Ministry of Economy, Trade and Industry (METI). A buffer of 3% is considered the minimum required for a stable power supply.

The ministry urged users to reduce electricity consumption between 3 p.m. and 6 p.m. to avoid a possible power outage.

“Please save as much energy as possible, for example by turning off lights that are not in use,” he said in a statement.

The ministry also urged avoiding heatstroke with proper use of air conditioning.

By mid-afternoon on Sunday, 46 people in Tokyo had been hospitalized with suspected heatstroke, public broadcaster NHK said.

Separately, a 94-year-old man from the city of Kawagoe, 20 kilometers (12 miles) northwest of Tokyo, died of suspected heat stroke after he was discovered unconscious in his unair-conditioned bedroom on Saturday, a said NHK.

The city of Isezaki, 85 kilometers (53 miles) northwest of Tokyo, recorded the highest temperature ever recorded in Japan in June on Saturday, exceeding 40 degrees Celsius (104 degrees Farenheit), according to the Agency. Japanese weather forecast. Read more

Japan’s electricity supply has been tight, with many of its nuclear plants still shut down after the 2011 tsunami and Fukushima nuclear disaster, while aging thermal power plants are shut down in part to meet its emissions reduction target of carbon dioxide. Read more

The country also faces a potential shortage of fossil fuels, including liquefied natural gas, due to the conflict in Ukraine and sanctions against Russia.