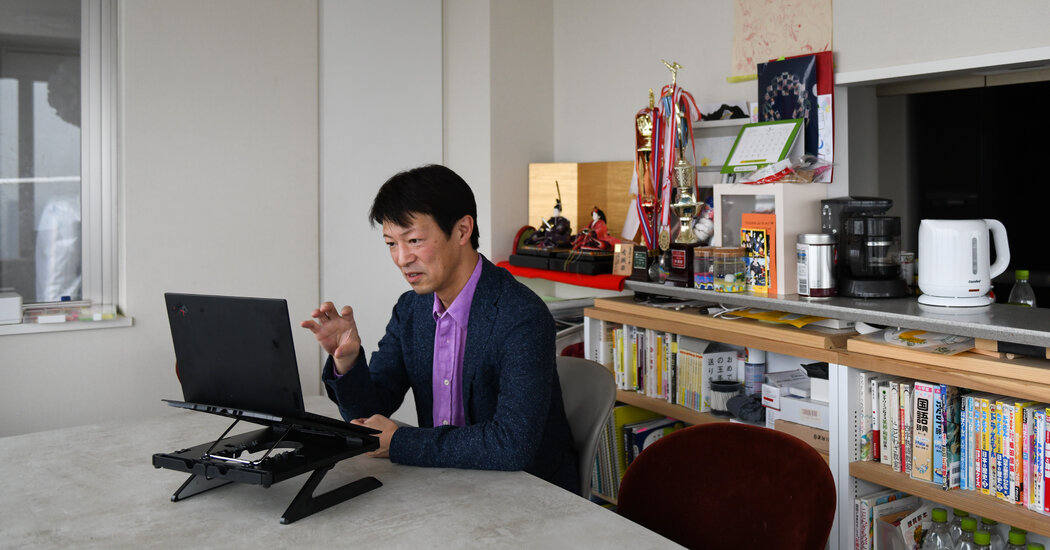 TOKYO — Japan is in the midst of a massive hiring season, when a wave of university graduates join companies at official ceremonies after sweating through the job interview gauntlet.

While this year’s ritual looks different, with Covid-19 forcing many businesses to downsize or go online, the goal has long been the same: kickstarting what was often a life devoted to a single company. In exchange for long hours, personal sacrifice, and a prescribed career path, employees would receive job security, pay and status that increase with age, and the honor of contributing to the glory of the world. ‘business.

But this model that has sustained Japan’s economic rise is slowly eroding. Employers have been cutting back on the system for years, arguing that greater flexibility will improve competitiveness. And now, with the pandemic, the pressure is mounting on the other side: by working from home, people have had more time to rethink their careers and lives. Many want a change.

For some, the goal is more say in when and where they work, as well as more autonomy and control over their careers. “Ikigai”, or purpose of life, has become a buzzword. Many people put family first, while others look for side jobs that better match their interests, which was frowned upon by companies until recently.

Although Japan is yet to experience an American-style “big quit”, a growing number of workers are considering changing jobs – nearly nine million, according to government data. And some are jumping ship, a risky and somewhat unusual step in Japan, especially for people in their 40s, 50s and 60s with stable jobs and families that depend on them.

Among young employees, the percentage who left their jobs at big companies within three years rose to 26.5% from 20.5% eight years ago, according to a study by the Recruit Works Institute, a research group .

Some people are even leaving Japan’s congested cities for outlying areas. In a first since 1996, Tokyo prefecture’s population shrank last year, to just under 14 million, a decline that experts attribute in part to the shift to remote working.

“Covid has triggered a big wake-up call: Should we continue to work the same way?” said Kennosuke Tanaka, professor of career studies at Hosei University. “This turns out to be a turning point for Japan.”

Takahiro Harada, 53, is among those who have taken the plunge, retiring early last year from Dentsu, the powerful advertising agency, to start his own personal coaching business.

More Japanese have tried new lines of work as the so-called gig economy has grown – some to make up for lost income during the pandemic and others to test whether they want to switch career.

“For the first time, I really thought about who I am, who I am,” Mr Harada said. “I didn’t find much purpose in my work. I realized that I was just choosing from the options my company gave me, not really doing what I wanted.

Over the years, Mr. Harada had noticed that people often turned to him for advice and that he felt moved whenever they expressed their gratitude. It wasn’t until last year that he realized he needed to act on that sense of accomplishment.

“I had thought about starting my own business, but Covid pushed me to take that step,” he said.

Japan’s traditional workplace model – which engendered mutual loyalty and working harmony between employers and workers – may have worked well during the postwar recovery and the “Bubble Era” of the years. 1980, when a famous health drink jingle asked corporate warriors, “Can you fight 24 hours?

But it is now obsolete, Mr. Harada said, a constraint both for workers and for Japan’s long stagnant economy.

The priorities of the younger generation – who have worked in a system where almost 40% of workers are now “non-regular employees” – are perhaps the ones that are changing the most.

In a November survey by Sompo Holdings, a major insurance company, 44% of respondents said their work priorities had changed during the pandemic, with a higher value placed on free time, family and friends. career goals. The change has been particularly marked among younger workers.

They are increasingly placing their own goals above those of the company. If they don’t see an exciting future in a company, they are more willing to quit, even in large companies, because they risk less than older workers. More are turning to start-ups as they see them as more exciting places to work, with greater potential for growth.

Rikako Furumoto, a 21-year-old university student, said that although she wanted to join a big, reputable company, “if the job isn’t something I like, I’ll quit and find something else.”

She wants a brand name on her resume in case she needs to change jobs. And while pay and prestige are important, she wants the freedom to work remotely at least two days a week and pursue side gigs in order to have a creative outlet.

Companies are beginning to adapt, overhauling their recruiting and personnel systems to attract top talent from a shrinking candidate pool as Japan’s population shrinks and ages.

Some companies are moving away from the traditional “membership” business model, in which employees are essentially owned by the company and move from job to job and often from city to city without much consultation. , to a “self-directed” or “employment” model. that ties employees to specific expertise and gives them a more active role in career planning.

“We have entered the era where individuals can choose their future,” said Masato Arisawa, human resources manager at juice and sauce maker Kagome, one of the most proactive companies in this regard. “We focus more on attracting talent than retaining it.”

Kagome has done away with its seniority pay scale and pays employees largely on performance. Although the company still offers jobs for life, it does not force workers to stay or treat those who leave as traitors. If they come back, they are welcome.

“Employees shouldn’t be expected to give their whole lives to one company,” said Arisawa, 61, who himself has worked at four companies.

Giving employees greater ownership of their careers could raise historically low levels of worker engagement in Japan. Gallup’s 2021 “State of the Global Workplace” report found that just 5% of Japanese workers said they felt engaged and enthusiastic about their work, one of the lowest rankings in the world.

A wave of resignations could form. While the number of people changing jobs fell to 2.9 million last year from 3.5 million in 2019, the number of those hoping to change jobs has continued to rise.

Ryuya Matsumoto, 38, married with two daughters, is one of those who changed jobs. He left a major insurance company in August, mainly because he wanted a job that offered him more family time and international interaction.

During the pandemic, his job didn’t allow for much telecommuting and he was often away from home until late. His wife, who was also working, wanted him to help her more with household chores and raising the children.

He joined a 10-week intensive course offered by Project MINT, a company created in 2020 to help people find purpose in their lives. “Family has become a key word,” Mr. Matsumoto said.

What pushed him over the edge were orders from his company to relocate to Sendai, 215 miles north of Tokyo. Fed up, Mr Matsumoto quit after landing a job at consultancy firm Accenture that allows him to work from home full-time and gives him the international exposure he craved.

“My former boss came to me about five times asking me to reconsider leaving,” Mr Matsumoto said. “But I’m happy in this new job.”

Tomoe Ueyama, a former Sony employee who founded Project MINT, said many participants felt stuck in less than satisfying lives and some feared the social security system would run out of money when they retired. concerts became more popular.

Participants – the program has around 60 so far – are encouraged to redefine their life purpose and get involved in black jobs and pro bono activities.

Ms Ueyama said the pandemic has brought positive changes to Japan’s work culture. “Even though it’s slow,” she said, “Japan is moving towards a society where people can have more meaningful careers and lives, as organizations realize that creativity and flexibility are key. to survive in a chaotic world”.