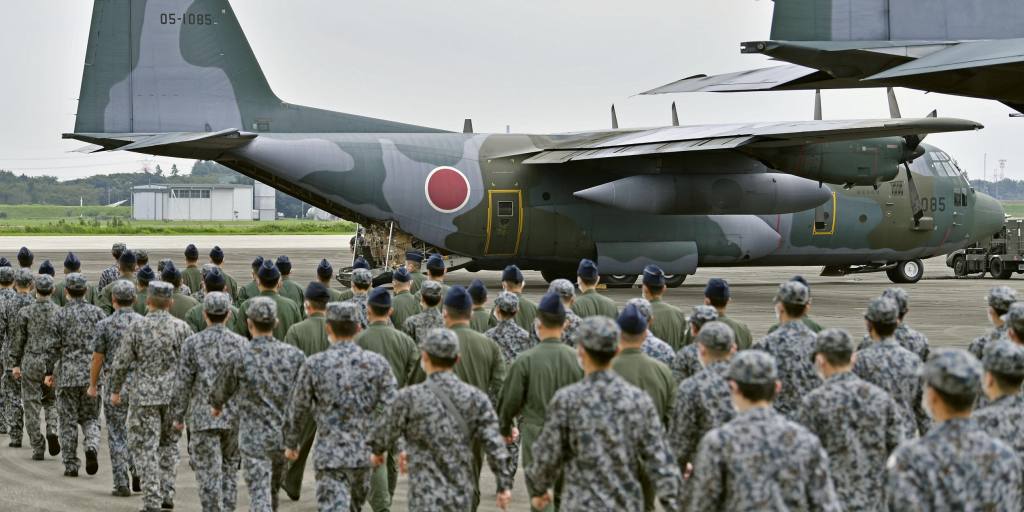 TOKYO – On Friday, a C-130 evacuation plane sent by the Japanese Self-Defense Forces took off from Hamid Karzai International Airport in Kabul, Afghanistan, bound for neighboring Pakistan. There was only one Japanese evacuee on board.

The passenger informed the government of his intention to leave Afghanistan. Several other Japanese in the country have said they are unwilling to leave at this point. With that, members of the Foreign Ministry and the SDF who had been sent to Kabul also packed their bags and settled in a neighboring country.

The empty plane was symbolic of the failed evacuation effort by the Japanese government, which initially planned to move up to 500 people to safety.

Japan ended its official evacuation operation on Friday, in the aftermath of two bombings near Kabul airport that left at least 170 dead, although Tokyo said it would continue to try to get the people out of the country.

Japan’s efforts are paltry compared to American and European efforts that have brought tens of thousands of people to safety. Critics say the government lacked a sense of urgency and awareness of the importance of helping locals who worked with Japanese employees.

The decision to send SDF planes for evacuations came on Monday, a week after the United States and European countries sent military planes to Afghanistan after Kabul fell to the Taliban on August 15. During this period, the situation on the ground worsened. per day.

On August 17, the government evacuated Japanese Embassy staff, Japan International Cooperation Agency employees, and other Japanese nationals to a third country, in coordination with US forces and with transportation provided by the United Kingdom. the last two decades have been left behind.

Compare that with the response from the UK, whose ambassador has remained in the country to continue processing visas for Afghan applicants.

The SDF-led evacuation was supposed to be on a larger scale. The Japanese Foreign Ministry estimated that less than a dozen Japanese nationals were to be repatriated as part of the operation, while the number of Afghan employees and their family members to be rescued numbered in the hundreds.

The C-130 transport plane did not arrive until Thursday at Kabul airport from Islamabad, the day of the attacks. Most of those who wanted to leave could not make it to the airport at that time, and Japanese planes made several unsuccessful trips.

European countries, for their part, have made steady progress. Germany, Belgium and the Netherlands have all announced the completion of their evacuations of their citizens and foreign partners. Germany transported around 5,000 people by plane.

Kazuto Suzuki, professor at the University of Tokyo, argued that the government did not view the situation with the urgency required. “They were too hasty to withdraw the staff from the embassy without deciding how to treat the Afghans who worked there,” and elsewhere, Suzuki said.

“Japan is not doing enough contingency planning,” he said.

There were also logistical challenges unique to Japan and its pacifist constitution.

The evacuation operation consisted of five stages: transporting the evacuees to Kabul airport, confirming their identity, leaving Afghanistan, transporting them to Japan and passing through the immigration process. He faltered at the first hurdle.

Tokyo has interpreted Japan’s constitution to allow only the minimum necessary use of force for self-defense, and the law also places strict restrictions on SDF activities. Particularly risky scenarios such as the withdrawal of Afghan troops create limits to the SDF response.

The United States and some European countries sent military helicopters to extract the residents of the city. The SDF, however, was legally prevented from operating outside the airport area which had been secured by US forces.

People “have no choice but to secure their own transportation,” Defense Minister Nobuo Kishi said on Monday.

The evacuation was carried out under article 84 of Article 4 of the Self-Defense Forces Act, which allows the SDF to transport Japanese citizens abroad in the event of unrest, but only if it does. can be done safely.

The government authorized the SDF to operate at the airport with US forces providing security. But that did not extend to areas of Kabul outside of US control, where conditions were deteriorating.

Invoking Article 3, which gives greater flexibility to use force if necessary, would allow the SDF to protect Japanese nationals whose lives are in danger. But the consent of the country involved is strictly required – this is not a realistic option with Afghanistan under Taliban control.

In previous overseas deployments, such as in Iraq, Japan has overcome the gap between the constraints on the SDF and the reality on the ground by adjusting its interpretation of the constitution.

The evacuation of Afghanistan, illustrating the challenges the SDF faces even in protecting Japanese citizens – part of the role of a nation-state – highlighted the contradictions of this system.