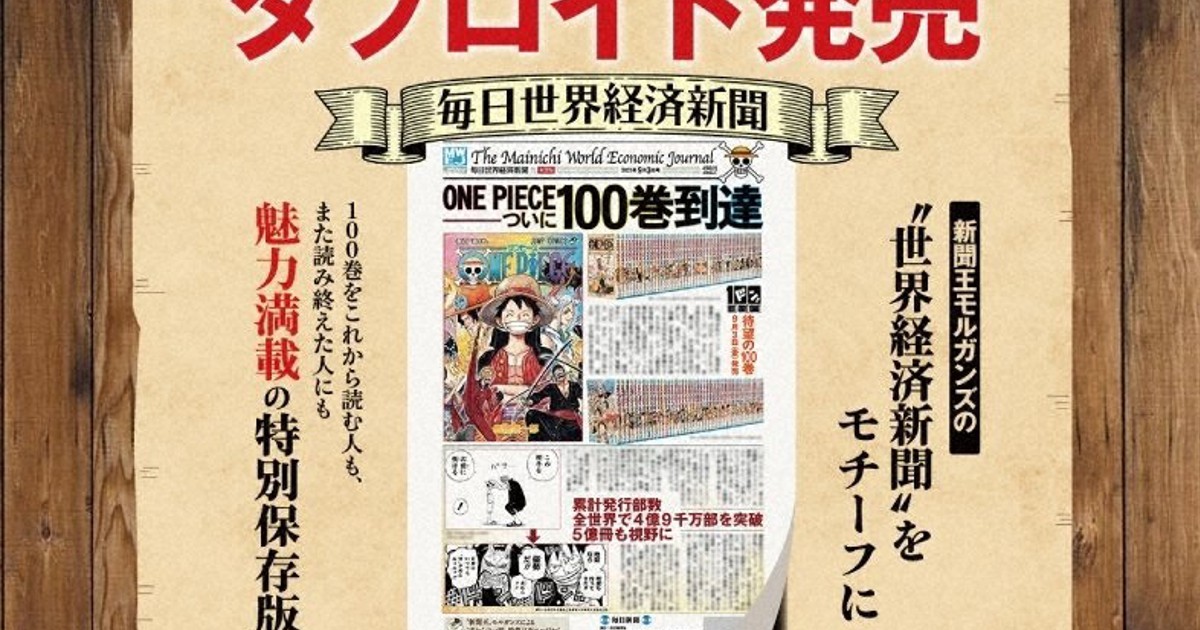 To commemorate the September 3 release of the 100th volume of the “Shukan Shonen Jump” “One Piece” series, The Mainichi Newspapers will publish a special tabloid edition “The Mainichi World Economic Journal” with the editorial cooperation of Shueisha Inc.

One Piece of Eiichiro Oda, the story of Monkey D. Luffy and the adventures of his companions as he strives to become the Pirate King, has been serialized since 1997 and is one of the most famous manga in the world. Japan, with a sea of ​​fans both at home and abroad. It has sold over 490 million copies worldwide.

Now, the “World Economic Newspaper” published in the series by King Morgans Newspapers is about to debut as a full-fledged periodical – the Mainichi World Economic Journal. With a focus on the climax of the Wano Country arc, the article traces the epic journey of the Straw Hat Pirates to the 100th volume of One Piece.

The diary also features a wealth of information, including profiles of each of the Straw Hat Pirates led by Luffy, along with other main characters, along with a character roster, historical timeline by year, and information. on the One Piece 100 We Are One project. This special, content-rich diary has something not only for avid fans, but also for children and adults alike.

The Mainichi World Economic Journal will go on sale September 3, priced at 490 yen including tax. Copies can be purchased from authorized distributors of The Mainichi Newspapers, convenience stores, and station stores in Tokyo, Kanagawa, Chiba, and Saitama prefectures (except certain areas and stores).

Additionally, the special newspaper can be pre-ordered online at The Mainichi Newspapers Yahoo Japan store: https://store.shopping.yahoo.co.jp/mainichi-shop/

To learn more about the diary, visit https://mainichi.jp/sp/sekai/ (in Japanese only)