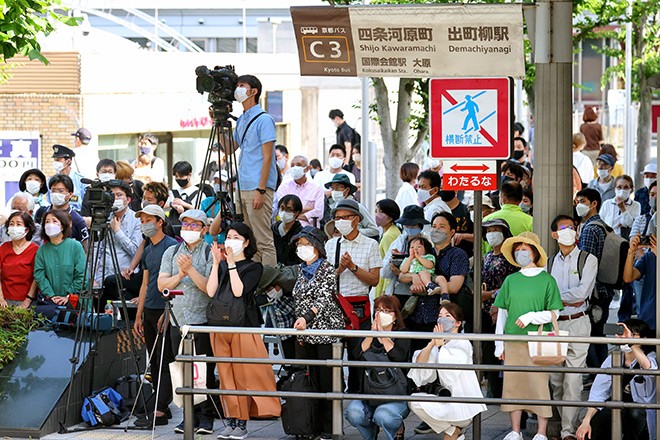 The Kyoto constituency is becoming one of the fiercest battlegrounds in next month’s Upper House election – among opposition parties.

The results could be potential “make or break” moments for two of them.

Progressive forces have long been strong in Kyoto, compared to other districts in the country.

In recent Upper House elections, with two seats up for grabs in the constituency, one was usually awarded to a candidate from the ruling Liberal Democratic Party and the other to an opposition candidate.

In elections six years ago, Satoshi Ninoyu of the LDP and Tetsuro Fukuyama, a veteran lawmaker from what is now the main opposition Democratic Constitutional Party of Japan, were elected.

Ninoyu has retired from politics while Fukuyama seeks re-election in July.

But Fukuyama faces a serious challenge from Nippon Ishin (Japan Innovation Party), a conservative opposition party that is gaining popularity.

“We want to capture the CDP stronghold (of Kyoto),” said Hirofumi Yoshimura, deputy head of Nippon Ishin who is governor of Osaka prefecture, during his trip to Kyoto in May.

Although the CDP holds the most seats in the Diet among the opposition parties, recent opinion polls have consistently shown that the percentage of respondents choosing Nippon Ishin as their choice for the proportional representation segment of the election of the Upper House is higher than the CDP figure.

Nippon Ishin intends to build on the momentum he gained from his success in the Lower House election in October.

A senior Nippon Ishin official said winning the Kyoto race would go a long way to improving the party’s status.

“Nippon Ishin’s public image is that his support base does not extend beyond Osaka Prefecture,” the official said. “If we beat the CDP in Kyoto, the significance would be more than winning a single seat.”

The stakes are high for the CDP in Kyoto.

If Fukuyama loses his seat, questions will likely arise over the responsibility of the CDP leadership led by Kenta Izumi, who became party leader in November. Izumi is a lower house member representing a constituency in Kyoto Prefecture.

On June 4, Seiji Maehara, head of the DPP election committee, backed Kusui’s campaign in a speech in Kyoto.

“We are determined to bring about change in Japan together with Nippon Ishin with whom we share the spirit of reform,” said Maehara, who represents a constituency in Kyoto prefecture in the Lower House.

Maehara was a former leader of the Democratic Party of Japan (DPJ), which led the government from 2009 to 2012. One of his DPJ colleagues was Fukuyama.

They separated when the DPJ finally split into CDP and DPP.

But Maehara and Nippon Ishin officials are not exactly on the same page in terms of desired election results.

While Nippon Ishin wants to oust the CDP in Kyoto, Maehara’s stated objective is a sweep of the two seats by parties other than the LDP and the Japanese Communist Party.

Regarding Fukuyama’s re-election bid, Maehara said, “I want him to do well.”

However, CDP officials fear that Maehara’s endorsement of Nippon Ishin’s Kusui could end up taking away many votes from the CDP and Fukuyama.

Maehera has a strong base of support in the prefecture and in some unions.

The Kyoto chapter of Rengo (Confederation of Japanese Trade Unions), which supports both the CDP and the DPP, announced its decision to back Fukuyama early. But the union organization will ultimately let the member unions decide how they will vote.

The LDP is fielding Akira Yoshii, a former member of the Kyoto city assembly, to fill the seat vacated by the now retired Ninoyu.

Still, officials from the LDP’s prefectural branch in Kyoto said they faced a tough race, noting that the party’s reputation in the prefecture had been tarnished by recent financial scandals.

“There is no doubt that Nippon Ishin is gaining momentum,” one of the officials said. “We should review the electoral strategy.”

The JCP traditionally enjoys some support in Kyoto and is alarmed by the rise of Nippon Ishin in recent years.

Kazutoshi Watanabe, who heads the JCP’s prefectural branch in Kyoto, said Nippon Ishin is indeed a “complementary force to the LDP”, not a party challenging the LDP.