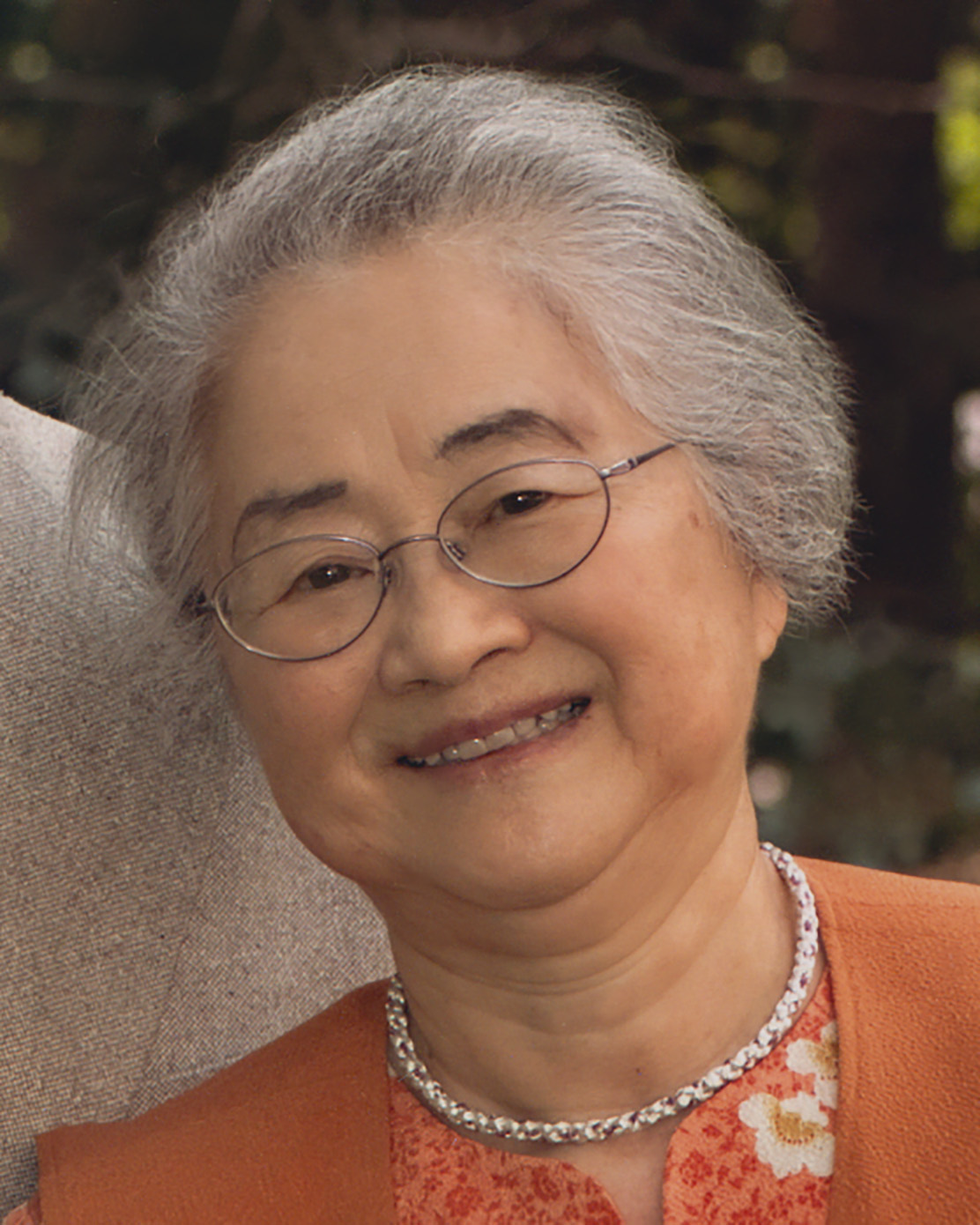 Masako Kinoshita (née Matsuoka) died in her sleep on August 4, 2022, at the age of 96. Born in Kochi, Japan, she and her husband emigrated from their home country and settled in Ithaca, New York, where he became a professor at Cornell University. They lived there for 60 years before moving in 2016 to Amherst, Massachusetts, where they shared a home with their youngest daughter and her family.

Her three daughters remember a childhood shaped by their mother’s irrepressible creativity and curiosity. “She never had to push us to excel,” recalls her second daughter, June. “She gave us the confidence to pursue our interests and passions. She was the first MacGyver. She could improvise ingenious solutions from whatever was lying around,” a quality that all of the “Kinoshita girls” relied on in their careers as high-energy particle physicists, biomedical entrepreneur, and architect-developer.

Masa, as her friends called her, was internationally known as a textile artist and historical researcher who published Nihon Kumihimo Kogihō no Kenkyū (Study of Ancient Japanese Braiding Techniques, 1994), a reference in the field of Japanese textile arts. The 359-page volume describes her decades-long investigation into the history of the craft of creating decorative braids (kumihimolisten)) used in Japan as ties for Buddhist sutra scrolls and lacing for samurai armor. When she began her research, little was known about what had become an almost forgotten craft. But Masa’s expertise in braiding and mathematical skills allowed him to establish this history kumihimo braids dating from the 7e century until war-torn medieval Japan were constructed using a finger loop technique that had largely fallen into disuse in Japan by the 19e century.

Modern kumihimo the braids are made using a stand-and-bobbin technique that she felt was too cumbersome and slow to allow the production of the huge amounts of armor lacing that would be needed in wartime. Masa’s research led her to obscure documents that recorded industrial recipes, including the making of braids, which were written in a secret code. With her in-depth knowledge of how braids are made and structured, she was able to crack the code. Her book records her journey in meticulous, scholarly detail, and is filled with photographs and computer-generated diagrams she created to reconstruct a multitude of historical tresses.

While the mystery of Japan’s lost braiding technology intrigued him intellectually, it was the beauty of braids that interested him most deeply. Masa had loved textiles since childhood in Japan, and while living in Ithaca she became very accomplished in weaving and spinning, using natural vegetable dyes and just about any textile craft that captured her interest. A few years after acquiring her first loom, she won the best jury prizes at regional craft fairs. Her daughters remember that she once knitted a sweater using fur from a friend’s Samoyed dog.

Masa was born on April 24, 1926 in the city of Kochi on the south coast of Shikoku, the smallest of Japan’s four main islands, to Yoshikazu and Michiko (née Nosé) Matsuoka. The family, descended from samurai, moved soon after to Kyoto, where her father taught philosophy at Doshisha University and her mother taught ethics at Doshisha Women’s College. She was the second of five children and the eldest of two daughters. The Matsuokas moved to Tokyo around 1937, where Masa attended Seijo Gakuen, a progressive private school. She attended Ochanomizu University, a top women’s university, where she originally planned to pursue a career in medicine, but switched to physics. It was in her physics class that she met her future husband, Toichiro Kinoshita, a recent physics graduate who had been pushed into teaching.

In 1952, after Toichiro embarked for the United States to take up a position at the Institute of Advanced Study in Princeton, New Jersey, Masa sailed to the United States aboard a freighter to join him. The couple moved to Ithaca in 1955, where Toichiro joined the physics faculty at Cornell University. During these early years, Masa helped her husband perform mathematical calculations on the ground state of the helium atom. After a dozen years of being a full-time stay-at-home mom, raising her three daughters and taking them to ballet and music lessons, she took a job with Asian Collections at Cornell’s Olin Library to support his new passion. for weaving. Her endless curiosity for textiles eventually led her on her quest to solve the secrets of samurai braids.

His sons-in-law gratefully remember Masa’s artistry in the kitchen. Holiday banquets at Kinoshita’s house featured Peking duck, which Masa prepared by painstakingly tossing ducks with honey water for two days, then roasting them in a blazing oven. The prized crispy skin and tender meat were then bundled into paper-thin homemade pancakes with a little hoisin sauce and slices of green onion for a memorable meal.

Masa is survived by her husband, Toichiro, of Amherst, Massachusetts; daughters and sons-in-law Kay Kinoshita and Alan Schwartz of Cincinnati, Ohio; June Kinoshita and Tod Machover of Waltham, Massachusetts; and Ray and Charles C. Mann of Amherst Massachusetts; sister Yuriko Tanaka from Hayama, Japan; and six grandchildren, Maya Schwartz, Eito Schwartz, Hana Machover, Noa Machover, Emilia Mann and Schuyler Mann. There will be a private viewing for family and friends on August 9 at 982 East Pleasant Street in Amherst, Massachusetts. A celebration of his life will be held at a later date in Ithaca, New York.