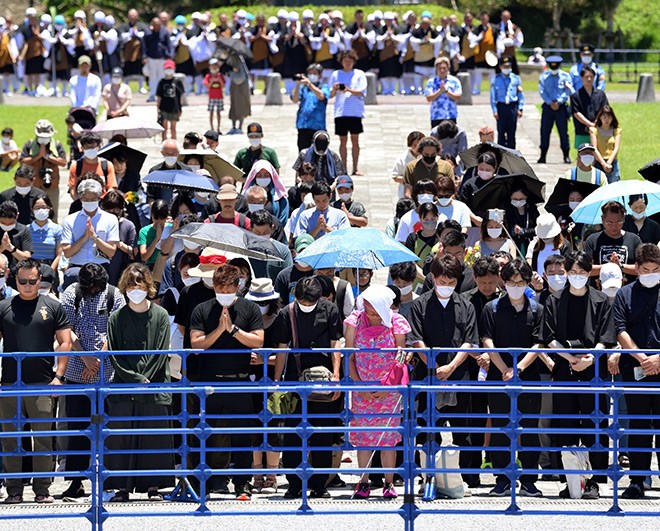 Okinawans pray for peace amid growing tensions abroad, at home

ITOMAN, Okinawa Prefecture – Residents of Japan’s southernmost prefecture paid their respects on Okinawa Memorial Day June 23 to the victims of the bloody ground battles that stained the ground here in the final months of the Second World War.

The day marked the 77th anniversary of the Battle of Okinawa, which claimed the lives of around 200,000 Japanese and Americans.

A memorial service was held at Peace Memorial Park in Itoman, which was the last site of fierce ground fighting.

This year also marks the 50th anniversary of Okinawa’s return to Japan after post-war American rule.

People prayed for peace amid growing concerns over increased US military training that has increased the burden on Prefecture and heightened military tensions abroad.

The event, hosted by the Okinawa prefectural government and the prefectural assembly, reduced attendance to 327 people amid the novel coronavirus pandemic. About 5,000 people usually attend the annual event.

Prime Minister Fumio Kishida is the first Japanese leader in three years to attend the ceremony as restrictions on social activities are eased.

Participants observed a minute of silence at noon.

In a peace statement, Okinawa Governor Denny Tamaki said Russia’s invasion of Ukraine “brings back memories of the ground battle” in the prefecture in 1945.

“It’s an indescribable shock,” he said.

Tamaki is committed to passing on the local phrase “Nuchi du takara” (It is life that matters more than any treasure) to the next generation. Okinawans cherish this phrase because they remember the fierce land battles that claimed the lives of one in four residents.

The governor expressed Okinawa’s thoughts of hoping that peace will return to war-torn Ukraine as soon as possible.

Tamaki also pointed to the current high concentration of US military bases in Okinawa. The prefecture makes up about 0.6% of the country’s land area, but it is home to about 70% of all US military installations in Japan.

“Residents here continue to bear an excessive burden hosting the bulk of the bases,” he said.

He urged the central government to quickly resolve contentious issues at the bases, including dropping the ongoing plan to relocate the US Marine Corps Futenma Air Base in Ginowan to Henoko district of Nago, both in the prefecture.

However, Kishida did not mention the relocation project in his speech.

He went no further than to say, “We will regularly gather visible evidence of reducing the burden of the bases one by one.”

Instead, Kishida stressed his determination to promote the economy of the prefecture and cited its geographical characteristics.

“We will work to promote Okinawa by making maximum use of the revised Special Law for the Development of Okinawa to realize its potential and achieve a ‘strong Okinawa economy,'” he said.

Many people visited monuments throughout the prefecture early in the morning on Okinawa Memorial Day, including the Cornerstone of Peace Memorial located in Memorial Park. They offered prayers for the war dead.

The monument lists the names of those who lost their lives. After 55 names added this year, a total of 241,686 names are set in stone.