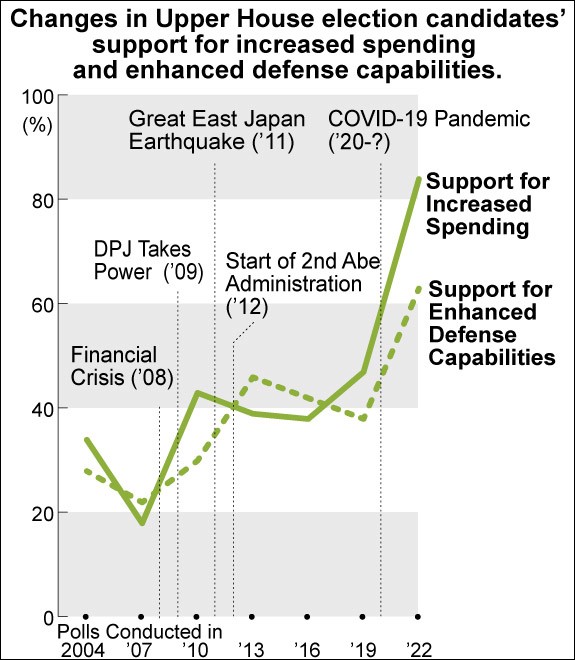 Poll: 84% of candidates are in favor of more government spending

Support for increasing public spending instead of practicing fiscal responsibility has doubled among candidates running for the Upper House in the past 20 years, according to surveys.

Of all candidates polled ahead of the July 10 Upper House election, 84% “supported” or “somewhat supported” the statement: “The government should increase public finances to revitalize the economy for the foreseeable future, rather than refraining from doing so in order to rebuild public finances”.

Candidates could choose from five choices to express their point of view.

The lowest rate of such “support” for the statement was 18% recorded in a survey of candidates in the 2007 Upper House election.

At that time, the fiscal austerity policies implemented by Prime Minister Junichiro Koizumi under the banner of “small government” were still in effect.

The polls, taken for the Upper House elections from 2004 to 2022, found that support for fiscal expansion among candidates tended to rise to overcome certain “events”. In the latest survey, the COVID-19 pandemic was the event.

The Asahi Shimbun and the office of Masaki Taniguchi, a professor of Japanese politics at the University of Tokyo, have conducted joint polls of national election candidates since 2003.

They compared the survey results of candidates running for the Upper House between 2004 and 2022 from the major political parties.

Support for increased government spending rose after the global financial crisis triggered by the 2008 collapse of US investment bank Lehman Brothers.

The rate rose to 43% in the 2010 survey, when the Democratic Party of Japan was in power.

In 2013, a year after the LDP regained power, Shinzo Abe’s second administration advocated fiscal expansion. The country was still trying to recover from the 2011 earthquake and tsunami in eastern Japan.

The 2013 survey showed that support for increased spending among LDP candidates increased further, to 74%.

Candidates from the NHK party, who actually oppose the public broadcaster, have raised their support for the budget expansion to 84% this year, up from 69% in the 2019 survey.

The party is fielding many candidates this year, and their support for the statement has helped boost the overall ratio.

Taniguchi said the latest survey results “represent a break with the idea of ​​smaller government.”

“The 2011 earthquake and the COVID-19 pandemic heightened the need for fiscal expansion,” the professor said.

Candidates were also given five choices on whether Japan should strengthen its defense capabilities.

In 2004, only 28% of all candidates surveyed supported strengthening Japan’s defenses, while 50% were “opposed” or “somewhat opposed” to the idea.

However, in 2013, 46% of candidates supported enhanced defense capabilities, while 33% were against the idea.

In the years between the two surveys, Japan’s relations with China and South Korea deteriorated over territorial and other issues.

In the 2016 and 2019 surveys, support for enhanced defense capabilities hovered around 40% among all candidates, but that figure jumped to 63% in 2022. Among LDP candidates, 99% “supported” or “somewhat supported” the idea.

The surveys also asked candidates about the constitutional review, although the specific wording of the questions differed.

In general, support for the constitutional review rose from around 40% to 50% among all candidates between 2004 and 2019.

A great change has been observed among the Komeito candidates.

Only 37% of Komeito candidates supported the idea of ​​amending the Constitution in 2010, just after the coalition lost power. This figure was less than half the ratio of the previous survey conducted in 2007.

However, no less than 74% of Komeito candidates backed the idea in 2013 after the party returned to power, following the LDP trend.

But support for the constitutional review among Komieto candidates fell to 17% in 2019, its lowest level in the polls.

Abe in 2017 proposed to amend the Constitution to clearly reference the Self-Defense Forces in Article 9, with plans to implement the revised Constitution in 2020.

In the latest poll, 42% of Komeito candidates supported the revision of the Constitution.

The Komeito appears to be strengthening its opposition to the constitutional review as the argument for amending Article 9 of the renunciation of war heats up.

In this year’s survey, 55% of all candidates polled supported the constitutional review, up from 44% in the 2019 survey.

Taniguchi said the July 10 upper house election is important because “the constitutional review might be more realistic depending on its results.”

Second Statement on Russia’s War on Ukraine and International Sport