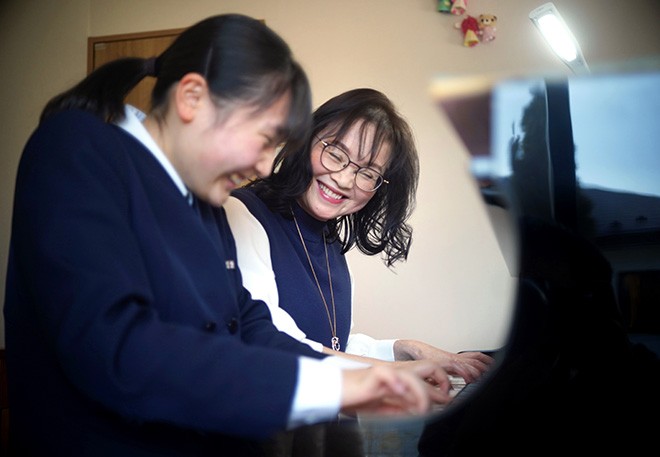 Editor’s Note: This is the third installment in a five-part series in which Japanese people from all walks of life reminisce about their experiences and backgrounds in the context of the Great East Japan Earthquake and the tsunami of March 11, 2011. Everyone recounts what they touched that day or those that followed to offer a perspective on the lives of others.

RIKUZENTAKATA, Iwate Prefecture–As a piano teacher, Naoko Tamura sees her goal as helping her students create what she calls joyful “rainbow-colored” music when they strike the ivory keys.

Tamura explained that the 3/11 disaster left him feeling like his world had gone black and white, with only shades of gray rubble and debris, but no color.

” I could‘I can’t find any flowers, like yellows or pinks,” she said.

Tamura lost everything in the gigantic tsunami that devastated this coastal city in northeastern Japan following the 9.0 magnitude earthquake in Great Eastern Japan.

She felt hungry for color and found inspiration in piano sounds that evoke the hues of a rainbow.

“If there are no rainbows, we can make them,” she recalled thinking.

Her home, the piano school she had run for nearly 30 years, and her prized grand piano were all swept away by the tsunami.

Later that year, Tamura picked up the threads of her life and resumed teaching.

She believes the “rainbow” can be created in the hands of each of her students, like 18-year-old Miyuki Takahashi.

“After the disaster, I learned to love anything I can touch with my hands,” she said. “I really like rainbow-colored music.”