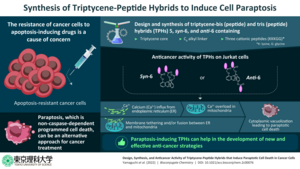 Apoptosis, a type of programmed cell death (PCD), is a biological process by which unwanted cells are eliminated in multicellular organisms. In most cells, certain proteins called “caspases” trigger apoptosis. This process is particularly important for the treatment of cancer, because inducing cell death in cancer cells can aid in their elimination.

Besides apoptosis, several types of PCD occur in cells including paraptosis, necroptosis, and autophagy. Of these, paraptosis is the most recently identified type of PCD, which is caused by the influx of excess calcium into cells, leading to cell death.

Cancer cells often become resistant to drugs that induce apoptosis and other types of PCD. In such cases, inducing paraptosis, which does not depend on caspases, could be a promising anti-cancer treatment. Therefore, the development of compounds that can induce paraptosis in cancer cells is crucial.

To this end, a team of researchers from Tokyo University of Science, led by Professor Shin Aoki in collaboration with Mr. Kohei Yamaguchi and Dr. Kenta Yokoi, conducted a study to develop new complex peptide hybrids with a paraptosis-inducing potential. This study was posted online on April 11, 2022, then published in volume 33 of the journal Chemistry of bioconjugatesApril 20, 2022.

“Previously, we synthesized an iridium complex-peptide hybrid compound and observed that it induced cell death in cancer cells, which was different from apoptosis. Since this compound was different from other paraptosis-inducing compounds, we wanted to understand its mechanism of paraptosis induction. Our goal now is to synthesize new compounds and elucidate how they induce paraptosis in cells, before sharing this crucial information with the public,” explains Professor Aoki while discussing the motivation of the team behind this study.

The newly synthesized compounds were composed of a triptycene core – an aromatic hydrocarbon – with two or three cationic peptides consisting of the amino acids lysine and glycine (represented as KKKGG) through a C8 alkyl linker chain, at different positions of the triptycene units. As a result, three triptycene hybrids (TPH) were produced, namely 5, syn-6, and anti-6.

The team then performed experiments on Jurkat cells, a type of immortalized human lymphocyte used in research, to understand the type of PCD that occurred in these cells upon treatment with syn-6 and anti-6. They found that death in these cells was inhibited by carbonyl cyanide m-chlorophenyl hydrazone (CCCP) which is an uncoupling reagent and mitochondrial calcium uptake inhibitor, RuRed which is a mitochondrial calcium channel blocker ) and 2-aminoethoxydiphenyl borate. (2-APB), which is an inhibitor of the D-inositol-1,4,5-trisphosphate receptor. However, cell death was not inhibited by inhibitors of other PCD types.

Therefore, they excluded autophagy, necroptosis and apoptosis, confirming that paraptosis is a major PCD pathway induced by syn-6 and anti-6 in Jurkat cells.

“Studies have shown that syn-6 and anti-6 induce the transfer of excess calcium from the endoplasmic reticulum (ER) to mitochondria, resulting in a loss of mitochondrial membrane potential. It is very likely that these phenomena are strongly related to ER fusion with mitochondria, followed by cytoplasmic vacuolation, leading to cell death. said Professor Aoki, when asked why these two TPHs were selected for the study. TPHs syn-6, and anti-6 are more hydrophilic than other TPHs, which could also explain their strong anticancer potential inducing paraptosis.

Through additional imaging experiments, the team detected the presence of cytoplasmic vacuolation, elevated concentrations of mitochondrial calcium, and ER degradation in Jurkat cells treated with syn-6 and anti-6.

These results confirmed that Jurkat cells treated with syn-6 and anti-6 had undergone programmed cell death, due to paraptosis. They also provide crucial information for the design of compounds that can be used as therapeutic agents against cancer and other diseases.

We hope that these promising findings will contribute to the development of effective therapy against ever-changing cancer cells.

About Tokyo University of Science

Tokyo University of Science (TUS) is a well-known and respected university, and the largest private research university specializing in science in Japan, with four campuses in central Tokyo and its suburbs and in Hokkaido. Founded in 1881, the university has continuously contributed to the scientific development of Japan by instilling a love of science in researchers, technicians and educators.

With a mission to “create science and technology for the harmonious development of nature, human beings and society”, TUS has undertaken a wide range of research from basic science to applied science. TUS has taken a multidisciplinary approach to research and undertaken intensive studies in some of today’s most vital areas. TUS is a meritocracy where the best in science is recognized and nurtured. It is the only private university in Japan that has produced a Nobel laureate and the only private university in Asia to produce Nobel laureates within the field of natural sciences.

About Professor Shin Aoki of Tokyo University of Science

Professor Shin Aoki is a Professor of Biology and Cancer Research at the Faculty of Pharmaceutical Sciences, Tokyo University of Science. He is engaged in the study of medicinal chemistry, pharmacology, bioinorganic chemistry and supramolecular chemistry. He is the recipient of the Japan Society of Coordination Chemistry Prize for Young Scientists (1999); the AJINOMOTO Prize in Synthetic Organic Chemistry, Japan (2001); and the Pharmaceutical Society of Japan Award for Young Scientists (2002). He graduated from the University of Tokyo with BS (1986), MS (1988) and Ph.D. (1992) degrees in pharmaceutical sciences. He holds a post-doctoral degree from the Department of Chemistry at the Scripps Research Institute, USA.

The title of the article