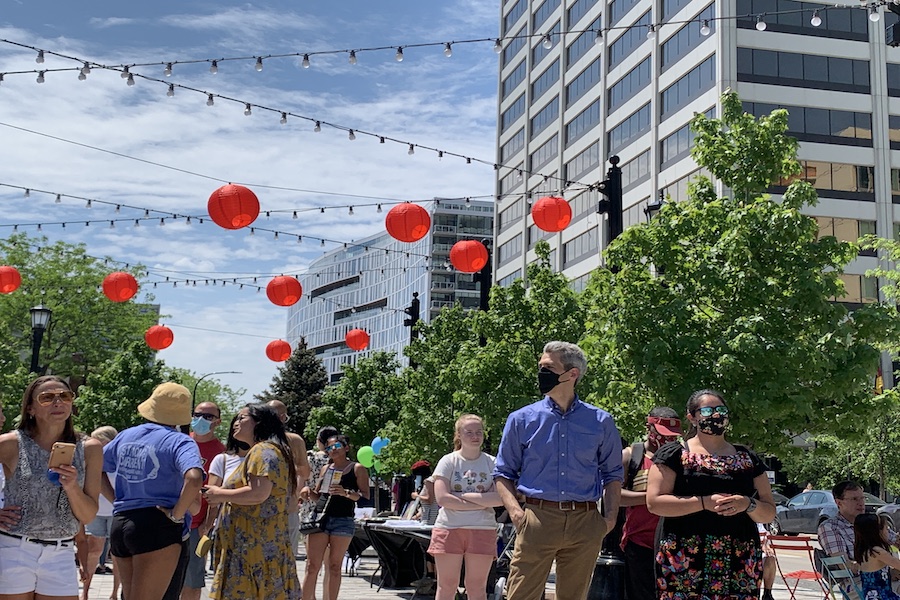 Artist and activist Melissa Raman Molitor chats with community members at the first Asian and South Asian Heritage Month arts festival in Evanston. Molitor partnered with many local groups and businesses to organize the event in three weeks.

At the event, vendors handed out free snacks from Asian countries, and others sold paintings and packages of Indian spices. The streets were filled with pedestrians who visited the stalls and watched shows.

Speakers discussed various topics including the experience of Asian Americans in Evanston, the need to integrate Asian Americans stories in school curricula and the importance of combating harmful stereotypes such as â€œthe perpetual strangerâ€ and the â€œmodel minorityâ€.

â€œMore and more, I think we need to claim our history and insist that it be part of American history,â€ said Soo La Kim, Evanston / Skokie School District 65 school board member, speaker at the event. of Saturday’s event.

In addition, a group of Mugai Ryu Iaido from the Japanese Cultural Center demonstrated sword techniques, and Tsukasa Taiko members played a taiko drum set. Mugai-Ryu Iaido is a traditional Japanese sword style from feudal times, and the taiko drum has its roots in Japanese religious ceremonies, courting, and theater.

Local artist and activist Melissa Raman Molitor organized the event to increase the visibility and representation of residents of ASAPIA Evanston.

Molitor said bringing the Evanston ASAPIA community together through the festival was especially important with anti-Asian racism and violence on the rise last year. She then addressed Mayor Daniel Biss, who attended the event, saying she hoped the festival would become an annual event.

Molitor said she wanted to have a particular arts festival – with a focus on food, performance and the visual arts – because art can make discussions of racism and fairness more accessible, and it can make more voices heard.

Molitor said Evanston has very few spaces at the center of the Asian-American community, and she hopes the arts festival will help ASAPIA residents connect with each other and feel a greater sense of belonging to the city.

According to the US Census Bureau, 9.4% of Evanston residents identified as being uniquely Asian. Molitor said this number is not entirely representative because there are many MÃ©tis residents of ASAPIA Evanston who would not have checked the â€œAsian, aloneâ€ box.

Kim told The Daily that prior to the festival, she had only known a “handful” of Asian Americans in the city. The event, she said, provided a great opportunity to connect with other Asian families in the region.

She said she hopes the art festival and other future events will have a similar impact on her children, who are multiracial.

Sophie Yang, one of the speakers at the event, said that growing up, she was embarrassed by her Japanese culture. It wasn’t until high school, when she joined the ETHS Asian Heritage Alliance and started having more conversations with her peers, that she became more willing to speak out against the microaggressions and stereotypes she has. experienced.

She said seeing the diversity and the number of people who attended the festival made her optimistic.