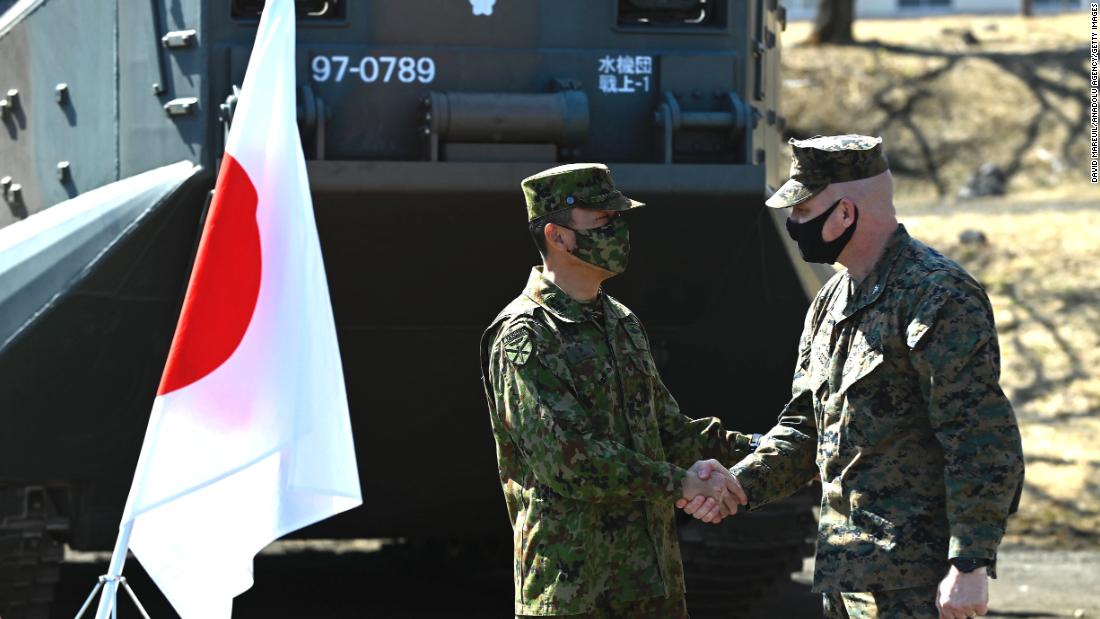 The threat is just the latest salvo from Moscow, which has been angered by Japan’s support for Ukraine and its growing ties with NATO nations, and is raising the heat in a long-running dispute over the sovereignty of islands captured by Soviet forces at the end of World War II.

Russian Deputy Foreign Minister Igor Morgulov said on Tuesday that the U.S.-Japan naval drills were “of a potentially offensive nature”, according to a report by Russian news agency RIA-Novosti on Tuesday.

“We consider such actions by Japan a threat to the security of our country,” Morgulov said. “If such practices develop, Russia will take retaliatory measures in the interest of strengthening its defense capabilities.”

However, he did not specify which US-Japan exercises he was talking about – nor did he specify what form Russia’s retaliation might take.

Japan has yet to respond to Morgulov’s remarks and did not respond to a CNN request for comment.

Earlier this month, the Abraham Lincoln conducted similar joint exercises in the Sea of ​​Japan, on which Russia has a long coastline.

According to the US Navy, the United States and Japan regularly hold joint naval exercises in the Indo-Pacific to “maintain stability in a free and open Indo-Pacific region.”

Tensions between Tokyo and Moscow have risen, fueled by Japan’s support for Ukraine following Russia’s invasion of its western neighbor and the dispute between Japan and Russia over sovereignty of islands north of Japan that were captured by Soviet forces after Japan’s surrender to Allied forces. at the end of World War II.

Japan on Friday described four disputed islands as “illegally occupied” by Russia, the first time in two decades that it has used such language.

In its annual diplomatic report released on Friday, Japan’s Foreign Ministry also referred to the islands, which Russia calls the Southern Kuriles, as Japan’s “Northern Territories”.

According to the report, Japan regards the islands as “Japanese territories over which Japan has sovereign rights, but which are currently illegally occupied by Russia.”

While this dispute has simmered for decades, Japan’s support for Ukraine has increased the pressure on relations between Moscow and Tokyo.

On Tuesday, Japanese Prime Minister Fumio Kishida agreed to provide food and medicine, additional financial support, small drones and protective masks to Ukraine, according to a statement released by the country’s Foreign Ministry.

Kishida’s announcement came after he spoke with Ukrainian President Volodymyr Zelensky for the fourth time this year.

Earlier this month, Japan expelled eight Russian diplomats and officials over the war in Ukraine.

Analysts said Moscow was nervous at the moment and was taking out Japan’s frustrations.

“Japan and the United States haven’t done anything out of the ordinary…nothing that really seems to elicit this level of reaction,” said James DJ Brown, associate professor of political science at Temple University in Tokyo.

Drew Thompson, senior fellow at the National University of Singapore’s Lee Kuan Yew School of Public Policy, echoed those thoughts, saying increased military cooperation with the United States was the sensible thing for Tokyo to do.

“Japan is slowly waking up to security threats on its periphery, and it’s doing so in a predictable and transparent way, consistent with a democracy,” Thompson said.

Cmdt. Hayley Sims, spokeswoman for the US 7th Fleet based in Japan, described the joint exercises in the Sea of ​​Japan in early April as “routine bilateral operations”.

“Our training enhances the credibility of conventional deterrence by demonstrating the strength of our bilateral partnerships,” Sims said.

But Russia has a different point of view.

“I think it really shows the heightened nervousness on the Russian side, their tendency to view actions in their vicinity as always potentially offensive,” Brown said.

He said Japan’s increased cooperation with NATO allies, including Britain and France, countries with which Russia has differences in Europe, is heightening tensions in the Pacific.

“One thing the Russians really don’t like is that Japan has been increasing cooperation with other countries beyond the United States in recent years,” Brown said.

Russia has been flexing its military muscle around Japan over the past few years, analysts said.

Satoru Mori, professor of contemporary international politics at Keio University in Japan, said there had been many Russian provocations in recent months, such as military exercises on disputed islands and tests of cruise missiles launched by submarines in the Sea of ​​Japan.

“Russia has stepped up its military activities near Japan, probably to demonstrate its ability to operate in the Far East, even amid the invasion of Ukraine,” Mori said.

Thompson says Russian threats go back further, noting in recent years flights of nuclear-capable Russian bombers near Japanese airspace and cooperation with China in air and naval exercises, including a joint naval circumnavigation Russian-Chinese from the main island of Japan, Honshu, in 2021.

“It’s Japan responding to the momentum that started with the strengthening of Russian-Chinese military cooperation,” Thompson said.

“It is change that is driving Japanese defense planning and political resources, rather than a direct response to these latest Russian threats,” he said. “If anything, this validates Japan’s strategy to bolster its own ability to deter the use of military force against it.”

Wall Street opens lower, back in the red for a week | Economic news