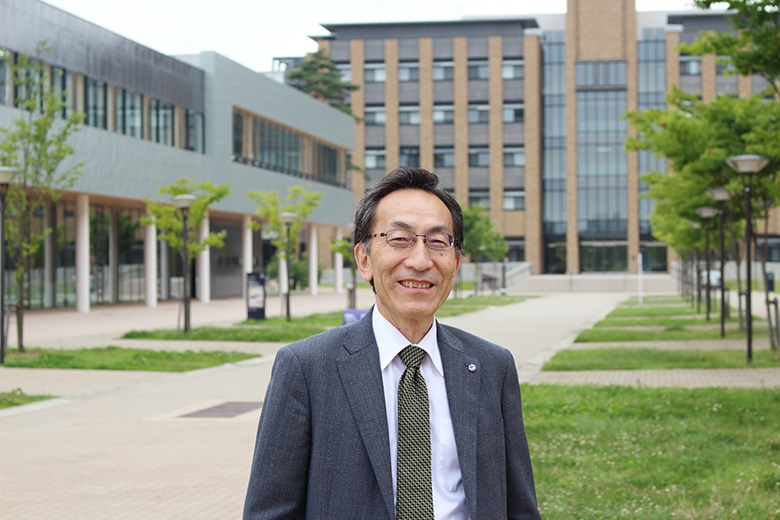 Hideo Ohno thinks the culture of innovation in Japan has stagnated. The president of Tohoku University says the country has lost the momentum it had in the glory days of the 1970s and 1980s, when it dominated the world of consumer electronics.

The thoughtful physicist also offers a more philosophical explanation, in the vein of “what goes up, must come down”: “It’s a price, if I may say so, for having succeeded at some point.

In the latest in our Talking Leadership series, Ohno talks about why he thinks Japan may be on the rise again, his experience of the 2011 Tohoku earthquake and its profound impact on Japanese society, and why he’s trying to make his institution more welcoming to foreigners. .

Tohoku University is on a mission to increase its data-driven science and technology output. It is investing hundreds of millions of dollars – funded partly by government and partly by industry – in a new science park that will be a one-stop shop for science measurements. Researchers from Tohoku and other universities, as well as industry, will be able to use the facility, which will house a 100nm X-ray microscope, MRI machines and more. Those working in materials science, agriculture, life sciences and beyond will make use of it, Ohno says.

THE Campus views: How to solve student mobility problems in Japan?

It’s efforts like this that will put Japan back on the global innovation map, according to Ohno: “I think we were missing that part [dynamism]. And we’re now trying to get back [on] Track.”

It also identifies a change in the underlying purpose of much of the research and other initiatives taking place in Japan, compared to ten years ago. Since the 2011 earthquake devastated the country – it was the strongest earthquake ever recorded in Japan – universities, businesses and government have shifted their focus to benefiting society, says- he. One project he cites as an example is a large cohort study of 150,000 people; he says he was able to persuade the government to fund such an important study because of the earthquake.

“I believe the UK and the US tried to establish such a cohort but failed because they couldn’t get enough participants,” he adds.

The day of the earthquake

On March 11, 2011, the day of the earthquake, Ohno, a professor at the time, was on the fourth floor of a Tohoku University building reporting to an advisory board. The building began to sway and objects fell from the ceiling. It was the third shock that made him realize that many lives were going to be lost.

He left the building with his colleagues. They found a safe place, and once the backup generator started, they watched the tragedy unfold on the news. At this point, there were reports of 200 deaths. Ultimately, around 20,000 people would lose their lives due to the earthquake and the tsunami it caused, including three university students.

In the month immediately following the disaster, even before having electricity again on campus, Tohoku established an institute for post-disaster reconstruction and regeneration. In the years that followed, hundreds of projects were developed with the aim of supporting society.

It’s initiatives like these that will reinvigorate Japan, Ohno believes: “We always have to reinvent ourselves – not just Japan, but also other countries.”

One area that Ohno knows the university needs to reinvent is internationalization. Japan has a reputation for being unwelcoming to foreign teachers.

“There’s probably some truth in that,” admits Ohno. “And that’s something we need to change.”

These part-time international scholars do not usually live in Japan, but outside of Covid restrictions, they would spend time on campus.

A significant barrier to integrating international staff is faculty meetings held in Japanese; Ohno plans to gradually introduce the use of English and eventually make it compulsory. Does he think there is a downside to “anglicizing” higher education?

Again, he offers a thoughtful response: “Well, there’s always some negative side if you want to change something. But… I think it gives us more benefits than negative effects.

Part-time faculty roles should also help the university recruit more women, Ohno hopes, as he is determined to improve Tohoku’s gender balance. The university also has a 266-place on-campus crèche, which it hopes will help with this.

Most countries in the world have a gender parity issue in STEM subjects, but Ohno says Japan is “far behind.” Is it due to cultural factors?

“Well, it’s easy to blame the culture. I think that’s part of the reason, but somehow we haven’t been able to change this notion that “maths, physics and chemistry are for boys” . And that inertia is still there,” Ohno says.

“You can call it culture, but culture is important. And I don’t want to think it’s an important culture for us,” he continues.

Ohno believes Tohoku has a special role to play in this because of its legacy as the first university in Japan to admit female students in 1913.

From research to administration

Ohno himself is a world-renowned expert in spintronics, the study of the intrinsic spin of the electron. He was tipped as a possible candidate to win a Nobel Prize in 2011 in Clarivate’s list of citation winners, but he modestly deflects the accolade with humor: “Well, um, first of all, this Nobel stuff is great publicity for Clarivate Analytics.” He then quickly shifts the discussion to the other eight highly cited Tohoku scholars.

Born in Tokyo to theoretical physicist parents, he spent most of his education in Japan, with some stints in Sweden and Florida.

After earning his bachelor’s and master’s degrees from the University of Tokyo in 1979, he considered going into business and working for the government before settling on a doctorate and university life. Does he think he made the right choice? Again, he offers a more philosophical answer than one might expect. “I try to think that I always made the right choice. Even if I didn’t.”

Ohno recalls his teacher-father dealing with student riots in the early 1970s, when protests over the U.S.-Japan security treaty erupted as cars and buses were set on fire. He doesn’t condone violence but thinks Japanese students today are less politicized – a subject he approaches with a touch of sadness.

“It’s hard for me to understand, but there’s no strong political sense of, say, participation,” he says. He does not know why.

“It may be related to [a] kind of a stagnant feeling about a society, or being in a stagnant society,” he suggests.

Young Japanese are trained to follow rules, he adds, but they don’t know they can change them “to make [them a] correspond better to their society or their vision of society”.

Academic Qualifications:BSc, MSc and PhD in Electronic Engineering from the University of Tokyo

Academic Hero:“I never really had a hero, but I respect Leo Esaki and Hiroyuki Sakaki as scientists.”

This is part of our “Talking leadership” series of 50 interviews over 50 weeks with leaders from the world’s top universities on how they solve common strategic problems and implement change. Follow the series here.

the Times Higher Education The Japanese University Rankings will be released at 5:00 p.m. JST (08:00 GMT) on March 24.