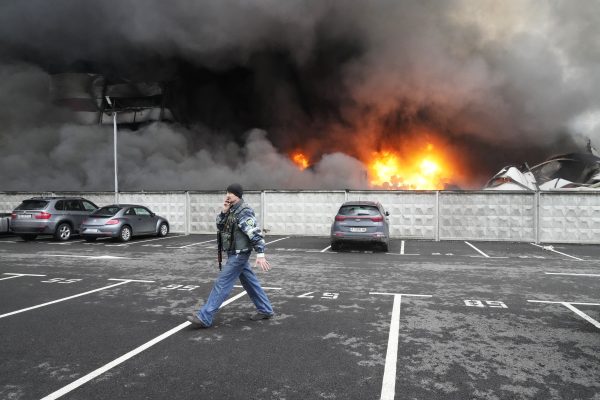 As Russia’s war on Ukraine escalates the humanitarian catastrophe, The UN says could soon increase to 4 million refugees, a Ukrainian family with deep ties to Japan remains behind. Two Ukrainian-Japanese brothers, Bogdan Parkhomenko and Stephan Seki, adjust a laptop and check the sound before the older brother, Bogdan, smiles, waves and greet his audience with konbanwa (“good evening” in Japanese).

The brothers, along with their mother, Stephan’s girlfriend and Bogdan’s beloved Yorkshire terrier Yolka, have taken refuge in their Kiev home as the war continues around them.

Before the Russian offensive in February, Bogdan, 35, and his younger brother Stephan, 22, operated an international trading company, importing health and beauty products from Japan. Now, with ordinary life suffocated by war, Bogdan has taken on the role of speaking to Japanese media and his supporters on Twitter, Youtubeand instagram on life under siege in Kiev.

Bogdan appearing on Japanese television, telling Japanese audiences about what is happening in Ukraine.

In a Zoom call eight days after Russia violently expanded its war in Ukraine, Bogdan said he was lucky to be with his family, to shelter in his home and still have food, water and the ability to communicate with the outside world. Having access to the internet and social media allows him to talk to people in Japan, describe what is happening in Kyiv and encourage them to get involved.

Bogdan, who in better times practiced rock climbing, now spends his days and nights sitting for interviews and help coordinate relief efforts at the base, using donations to purchase and distribute food and basic necessities, especially to the elderly. The Russian war, he reminds viewers, did not start two weeks ago, but has been going on in eastern Ukraine since 2014.

Although Japan is more than 8,000 kilometers from Ukraine, there are only 43 kilometers between Hokkaido and Russia. Sakhalin Island, part of which was administered by Japan until the end of World War II. Russia and Japan never signed a peace treaty after the war and continue to be divided by a ongoing territorial dispute above the Russian-controlled Southern Kuril Islands, northeast of Hokkaido, which Japan calls the Northern Territories.

Besides territorial disputes with Russia, Bogdan says Ukraine and Japan are linked by their shared experience of nuclear disasters – Chernobyl in 1986 and Fukushima in 2011. Bogdan was born just two months after the Chernobyl accident in the city of Dnipro in central Ukraine, where his mother moved to get away from the radiation in the north.

Seeking a safer environment for her child, she later moved to Japan where Bogdan grew up and in 1999 her brother Stephan was born. They spent most of this century in Ukraine, but in 2017 Bogdan returned to Nagoya to work for a Japanese company for two years.

Growing up in the Kansai region of Japan had a strong influence on Bogdan’s way of thinking and communicating, which he says resonates with Japanese not only because of his fluent language skills and ability to understand Japanese sensibilities, but also because he has a calm and steady demeanor. demeanor and adopt a positive attitude, even when air raid sirens are blaring in the background.

When he talks about the war, Bogdan doesn’t sound angry or aggressive. He is not hostile and he does not blame. He explains the situation, clearly and with context. His message has reached former Japanese politicians, well-known public figures, and ordinary Japanese people who are expressing a newfound interest in the lesser-known distant nation until war breaks out. Bogdan hopes more Japanese companies will suspend business relations with Russia to increase pressure. He implores them: “Please stop exporting all products to Russia because we want to stop [the] war.”

As more Japanese follow Bogdan’s live stream and media reports, their concern translates into support — not just moral, but financial. The Japanese are sending donations directly to humanitarian organizations and to Bogdan and his brother, who are helping coordinate relief on the ground for people in need of everything from basic food, water and hygiene items to pet food and other supplies.

A sign in Kobe, illuminated in the colors of the Ukrainian flag.

Bogdan, who lived in Kobe during the Great Hanshin earthquake in 1995, says the similarities and uncertainty of that disaster and the war now unfolding in Ukraine are striking. “We don’t know what will happen in the next few minutes, hours. We don’t know which situation is better – stay here or move. Evacuation to western Ukraine would require gasoline he does not have and precarious travel on roads that may not be passable. For now, he says, staying in central Kyiv may be their safest option.

The war, says Bogdan, revealed the Ukrainian character to the world. “Ukrainians show how strong we are spiritually. Not physically. It’s a battle of physical might and mental might. We show our mental power and Russia shows their physical power.

For a man whose life has been punctuated by traumatic events – a nuclear meltdown, a violent earthquake, revolutions, and now war – Bogdan remains remarkably optimistic. “I always smile. I am always positive. I do not criticize. I’m just showing what we have to do.

He speaks with admiration for his fellow citizens saying: “Ukrainians are very spiritual people. They communicate and talk with [their] heart.” Sharing this message with Japan and the outside world has become her mission. “I have lived for 35 years to be here to connect Japan and Ukraine to change the world.”

He believes this conflict, which he calls a “controlled war”, is a sign that it is time to change the whole world and overthrow the old structures. “We need to do a big reset of all rules, all situations, all powers,” Bogdan says.

Bogdan believes that he and people like him – people with dual nationality and others who not only possess multilingual prowess, but have a deep understanding of multiple, even conflicting cultures or systems – can bring about changes in the world. inside. Stepping back to take a broader view of the war, Bogdan says Putin has forced Ukraine to a low point from which it will eventually rise.

For Bogdan, with his understanding of Japanese, Ukrainian and Russian culture, language and history, he feels the need to bring a different perspective to the geopolitical conversation currently unfolding in Japan.

He hopes that the Japanese-Ukrainian relationship will only deepen and continue to flourish long after the current conflict. Ukraine will need international partners and friends when it comes time to recover and rebuild after the brutal and merciless war raging today.