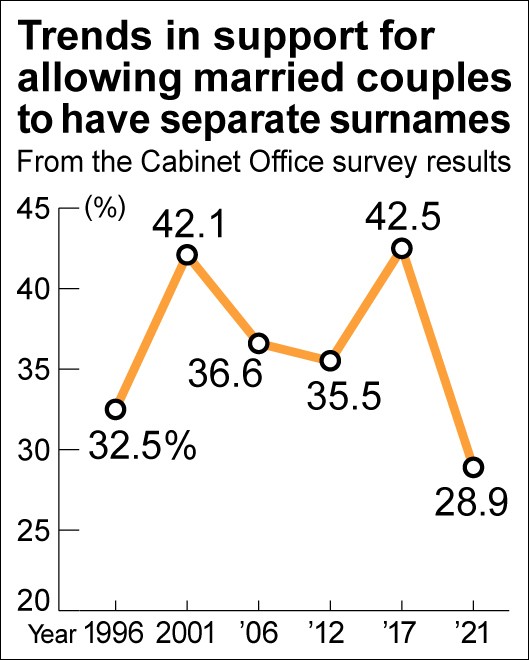 The Justice Department, out of consideration for conservative politicians, has forced what critics say is a misleading public opinion poll on the issue of allowing married couples to have separate surnames, the Asahi Shimbun has learned .

The Cabinet Office, which led the ‘family law’ inquiry, has repeatedly asked the Justice Department to withdraw its suggested changes to the questions in the inquiry, but the department has refused, according to official documents obtained by The Asahi Shimbun.

The survey was conducted among 5,000 randomly selected people aged 18 or over from December 2021 to January this year.

The results showed that public support for a system that gives married couples the option of having dual surnames has dropped to an all-time high of 28.9%.

Previously, the survey was conducted through face-to-face interviews, but the latest was sent to respondents due to the COVID-19 pandemic.

According to the leaked documents, the Justice Department decided in July 2021 to bring forward the timeline for the investigation, which had been conducted every five to six years.

These are not the only changes.

In previous surveys, the question about double surnames asked respondents to choose from these answers, provided in this order: (1) maintaining the status quo; (2) allowing married couples to have two surnames; and (3) allow birth names to be used as trade names in a legal system, even though married couples must only use one surname.

In the 2017 survey, 42.5% of respondents said the government should allow married couples to have separate surnames.

A record 42.2% in the latest survey said the government should establish a legal system allowing spouses to keep their birth names, up 18 points from the previous survey.

For the latest survey, the Ministry of Justice and the Cabinet Office‘The Office for Gender Equality had agreed to adjust the questions after some Diet members said they were ‘difficult to understand’.

The ministry has proposed splitting the single question and creating a new stand-alone question that asks respondents if they think there is a need to establish a legal system to expand the use of birth names as business names.

The office, however, pushed back, saying the central government had yet to fully discuss the issue of legalizing the use of birth names.

The department withdrew its proposal and created a reference chart to accompany the question. In this chart, he used the phrase “a legal system which allows (married couples) to use their birth name extensively as a business name”.

But the office disputed the term “widely”, saying its vagueness could “mislead public opinion”.

According to the documents, the department refused to change the wording because “dropping the term ‘wide’ would not sit well with conservative politicians.”

“It was summed up that we would carry out the investigation with a neutral attitude so as not to receive criticism from various sides,” said a senior ministry official.

Seiko Noda, then Minister of State for Gender Equality, criticized the survey when the results were released in March this year.

She said the changed wording and order of responses created misleading results compared to previous surveys.

Taniguchi said it was “absurd” that the ministry gave importance to politicians from the ruling Liberal Democratic Party.

“It undermines public confidence in the investigation,” he said.

(This article was written by Masatoshi Toda, Akiyoshi Abe, and Sachiko Miwa.)

The economic ties that unite China