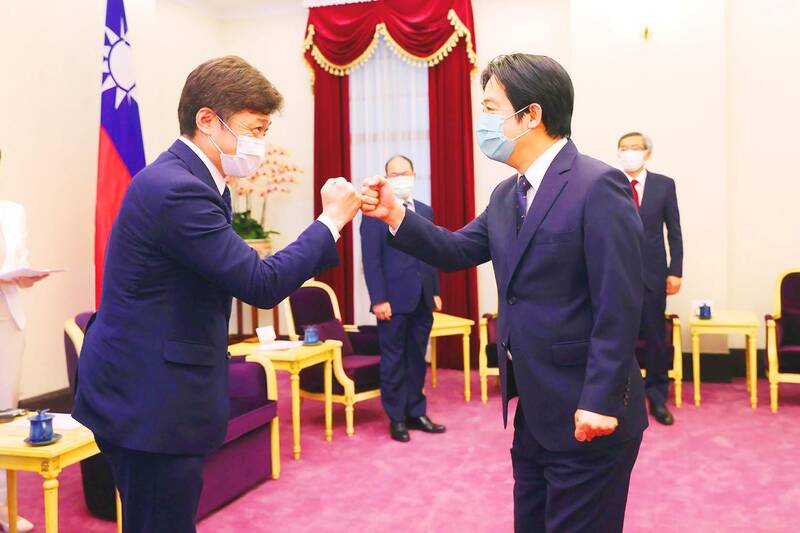 FOR EXPERTS, STUDENTS:
People should be allowed to see Taiwan free and open for themselves, especially as many are concerned about the nation’s security, lawmaker says

Taiwan should quickly reopen its borders to East Asian political pundits and Chinese-speaking students so they can see the country free and open for themselves, a delegation from the International Relations Research Group has said. -strait from the University of Tokyo to President Tsai Ing-wen (蔡法文) during a meeting at the presidential office yesterday.

Some members of the delegation consisting of Japanese and Taiwanese researchers had to obtain visas in advance, as Taiwan has not reinstated a visa waiver program for Japanese people that was suspended at the start of the COVID-19 pandemic. 19, said politics professor Yasuhiro Matsuda, who led the delegation. .

Like Japan, Taiwan is wrestling with how to relax a quarantine requirement for incoming travelers, Matsuda said.

Photo courtesy of the Presidential Office via CNA

He had to wait 18 months to get his visa, he added.

“People from all over the world increasingly want to study Mandarin in Taiwan. Moreover, experts concerned about developments in East Asian countries are eager to visit Taiwan and see the situation here for themselves. They can investigate, study and exchange views with Taiwanese experts,” he said.

“A free and open society is Taiwan’s greatest advantage. More of Taiwan’s strengths can be developed as it moves towards a more open society,” he said. “If Taiwan reopens its borders, more people will be able to see the country’s outstanding achievements in various disciplines.”

The world is rediscovering the value of Taiwan, but many are worried about its safety as democracy around the world is under threat, from Russia’s invasion of Ukraine to major Chinese military exercises around Taiwan, Matsuda said.

“However, anxiety alone cannot solve any problem. The important thing is that Taiwan, Japan, the United States and other allies negotiate on the goals they seek to achieve,” he said. .

Sending messages to China is also important, he said, adding that they must be based on “a strong will and [the] ability of the Taiwanese government and people to defend the country.

“A lack of capabilities would not help highlight Taiwan’s security interests when engaging in cooperation with other countries or communicating with China,” he said.

Matsuda said the relationship between Taiwan and Japan is a virtuous circle: Japan last year donated Astra-Zeneca COVID-19 vaccines to Taiwan, while Taiwan lifted a ban on food imports from five Japanese prefectures affected by the Fukushima nuclear disaster in 2011.

Taiwan also seeks Japan’s support in its efforts to join the Comprehensive and Progressive Agreement for Trans-Pacific Partnership, he added.

“It is regrettable and very unfortunate that former Japanese Prime Minister Shinzo Abe passed away in July… [Abe] was competent in the implementation of policies and a central figure in this virtuous circle. We must not let the circle stop with his passing,” he said.

Matsuda also praised Taiwan for implementing a “zero tolerance” policy at the start of the COVD-19 pandemic, which gave the country enough time before vaccines became available and it could work to gradually increase. their vaccination rate.

Taiwan is one of the few examples in the world that proves that economic development and disease prevention can coexist through collective awareness of containing the coronavirus and flexible and effective application of disease prevention policies, a he declared.

Tsai thanked Japan for stressing the importance of stability in the Taiwan Strait on several important occasions.

“As a responsible member of the international community, Taiwan will not cause conflict or escalate tensions with China,” Tsai told the delegation.

The president said the friendship and cooperation between Taiwan and Japan can be deepened through exchanges at all levels, citing her meeting on Tuesday with Japanese representative Keiji Furuya, chairman of the Japan Diet Members’ Advisory Council. – Ground floor.

Comments will be moderated. Keep comments relevant to the article. Remarks containing abusive and obscene language, personal attacks of any kind or promotion will be removed and the user banned. The final decision will be at the discretion of the Taipei Times.

The myth of a real Chinatown in Japan | Culture