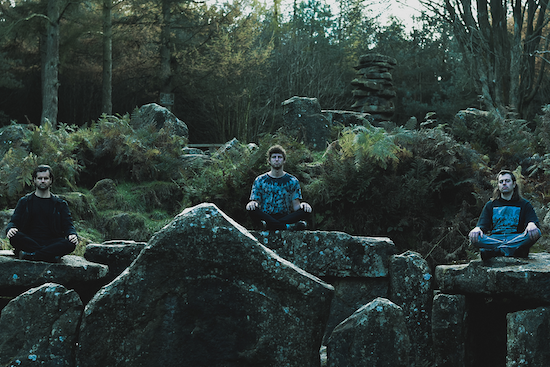 Kurokuma takes its name from a waterfall near the town of Ajigasawa in northern Japan and translates to “black bear” – the waterfall looks like the animal if it was standing on its hind legs. Musician Joe Allen first visited when he lived nearby, working in Japan as a translator. He enjoyed his time in the country. “Life was great, it was the most fun I’ve ever had as a human being,” he tells tQ on Zoom, now back in his native Sheffield, “but there was always this thing in the back of my mind: ‘I want to be in a band, I want to make heavy music that makes a difference.” During a later stay in Japan, while working as an English teacher , a culture of heavy after-work drinking among expats has begun to take its toll. “It was great, but it became this blurry, and towards the end, I felt like my life wasn’t progressing in any way. Probably regressing, actually.

Looking for an outlet, he managed to get a job in Santiago, Chile, teaching English at a university, and booked a short vacation in California along the way. He stayed in Hollywood and saw the sights, then, three days before he left for Chile, he accidentally put his passport through a washing machine. Told that there was no chance that the Chilean border authorities would accept soggy paper and a blurry photo, he was forced to spend all the money he had saved up to move to South America on a replacement. emergency and a motel. “I was just like, ‘shit. I’m going home,'” he recalled.

Allen never left for Chile. Instead, he returned to Sheffield where he bonded with an old friend called Jake Mazlum. When Allen was in sixth grade, his teen metal band was playing in the central Corporation room and Mazlum was in the crowd wearing a Dillinger Escape Plan t-shirt. They spoke after the show; Allen actually turned down the opportunity to star in a new project Mazlum was planning at the time because he was leaving for Japan that summer, but they kept in touch on Myspace. Upon Allen’s return from Los Angeles, he acted on that deep-seated desire to form a band he felt in Japan, and they began hanging out in person again.

They formed a group and chose the name Kurokuma mainly because of the rhythm of the word. Because Mazlum doesn’t speak Japanese, “to him it didn’t make sense, but he liked the sound and so did I. There’s something about the two Ks that’s a little mysterious,” Allen says. It was also important, he continues, that their name hinted at a broad and international reach, in line with a philosophy they set out from the start: they wanted to play sludge and doom, Allen explains, but also be ambitious. and broad in their reach – “doom plus something else”, as Allen puts it. “That something else has always been the influence of what you might call world music, just things that didn’t necessarily originate in England. We both love to travel, we both love learning about other cultures and we love metal and doom. Looking for ways to innovate with their music, it seemed natural to combine these two passions. “It wasn’t contrived or forced,” he says.

As we speak, Allen is sporting one of the band’s most popular items, a baseball cap emblazoned with the motto “Make Sludge Grim Again.” “We’re not even the most sinister sludge band,” he admits, “but there was a time when sludge and stoner were often used as terms for things that weren’t really what they were. sludge – absolutely dirty, dirty music. It’s important for us to push the boat out a bit. One of the ways the band did that, especially in their early days, was to embrace their love of the electronic music, raves and free parties.”While we might not bring the sounds of rave stuff, we want to bring the feel of crushing volume and crushing rhythm,” says Allen. and doom metal “to me are extreme forms of music. Bassist George Ionita, who showed up to audition for the band with a battery-powered bass that ran out halfway through, and who leads a system of his at Liverpool, is particularly passionate. “You get in his van and it’s just gabba.”

Truth be told, they were the first metal band to release music on Sheffield’s rave label Off Me Nut, 2019 aptly titled Sheffield’s Best Metal Bands, Vol.1 which was the product of a surprisingly fortuitous night in Tokyo, where Kurokuma was supporting Liverpool band Conan’s Japanese tour, and Off Me Nut founder Michael ‘Tich’ Townsend was hosting a rave in the city on same evening. “He came over and watched us play, then we went to his rave afterwards. There were Japanese kids with Sheffield United shirts, it was crazy. In the aftermath, they discussed combining the two worlds again via an EP.

Sheffield’s Best Metal Bands Vol.1 reveals something at Kurokuma’s core – a desire to reach colossal levels of intensity. During a Kurokuma show, “it’s very important that we get people moving, not just headbanging or moshing like in a normal show, but it’s pretty important that we get people to move beyond that. Sometimes, when it’s the right audience and the energy is there, people dance and let loose. This is the energy that we are trying to create. It’s not about grabbing a few beers and having a good time with the guys, we’re about touching a person and making them move like they can’t resist. We want to touch this primal instinct.

The group has had its principles “from the start,” Allen says. “Everything is planned, everything is a concept.” It’s thanks to this attitude that in the years since their formation in 2013, steadily releasing singles and EPs as they go, they’ve held back a lot of their best material for their eventual debut album – this month of february Born of obsidian – could be as consistent as possible. “We don’t just want to release music for music’s sake.” There were subtle hints of a Central and South American musical influence here and there in their previous EPs and singles, but on their album, the band drew on those inspirations. They could only release an album when the time was right, he continues. “We had to wait for everything to line up perfectly, the music, the lyrics and the art. There’s no way we could have written this album early on, it took years to get there.

Born of obsidian is a concept album, reflecting the band’s fascination with extinct Mesoamerican cultures, particularly the Olmecs – the region’s oldest known civilization – and the Aztecs – who were wiped out by European colonial conquests in the early 16th century. The title of the album refers to how Aztec priests are said to have used obsidian mirrors to receive messages from the god of providence Tezcatlipoca who was associated with the material. Its name translates into English as “Smoking Mirror”, from which the album’s opening track also derives its title. ‘Sacrifice To Huitzilopochtli’, says Allen, “is directly about human sacrifice. The Aztecs believed that if they did not sacrifice to the sun god, the sun would stand still in the sky. The track “Jaguar” is about how ancient Olmec shamans could supposedly turn into beasts, and “Ololiuqui” is about hallucinogenic seeds that, when taken, would allow communication with the gods. The closing track “Under The Fifth Sun” recounts the collapse of Aztec society due to plague and the warmongering of the Spanish conquistadors, and takes its title from the Aztec doctrine in which the current world had preceded four other cycles of creation. and destruction.

It is the spiritual dimension of Aztec and Olmec societies that most fascinates Kurokuma, and which first captured Allen’s imagination as a child. “When I was in school, there was an encyclopedia and I always loved turning the page on the Aztecs. There was an image of a large temple and human sacrifices. It fascinated me, it seemed so supernatural, barbaric and horrible. As a child, I’m sure you can imagine how much this grabs your imagination. It’s the depth of the belief, the fact that people have died for it, that fascinates him, and on Born of obsidian he hopes that the levels of intensity the band offers its listener can induce something similar. “I want to put them in intense states of mind. ‘Sacrifice To Huitzilopochtli’ is a brute force song, it’s simple, it hits hard. “Ololiuqui,” the song about hallucinogenic communication with the gods, “is trippy. We really consciously make sure that the music goes with the lyrics.

It is unknown what the Olmec and Aztec music itself would have sounded like, but the band adopted other musical traditions from the region, particularly in the rhythmic aspects of the record. “We try to make things as authentic as possible and do things with respect, changing any musical elements that we didn’t feel fit.” Their close friends from Mexican metal band Vinnum Sabbathi with whom they toured in 2017 served as unofficial consultants. “We were passing stuff to them to make sure we weren’t just slaughtering their culture. We thought we didn’t want to be seen as appropriators of culture. Nonetheless, when they first shared the album cover – which features iconography including one of the Olmec’s so-called “colossal head” carvings – “we received some comments from Mexican nationalists saying ‘ it’s not your culture”.

In response, Allen says, “It was literally two people on Instagram. We’ve had a lot of Mexicans who really love listening to it and say it’s amazing. He cites the band’s depth of interest and research. , and finally the consistency of Born of obsidian, as a counter-current to claims of appropriation. “We don’t just take a picture and think ‘that looks cool, let’s put it on the album.’ The whole album talks about this theme which is our passion, something that we have studied and which really inspires us. The album wouldn’t sound like it does if we hadn’t used that concept, and I hope it’s authentic. Maybe I’m naive…”

It’s hard to deny the intensity of effort Kurokuma put into their debut album, and the intensity of sound it generated. Recorded with famed metal producer Sanford Parker, who flew to London to work there after the pandemic prevented their initial plans to make the album at Steve Albini’s Electrical Audio studios in Chicago, they went through so much afterward from post-production that they ended up not using Parker’s mixes entirely and bringing in trusted friend Chris Butterworth so they could fine-tune the finer details. “We’re a very particular group trying to do one particular thing.”

Naturally, for a group that takes such pride in their attention to detail, Kurokuma has their next step determined in advance. Allen won’t give much on the specifics, other than that they deviate from Mesoamerican themes. “The next album is about something else, something more universal, you might say”, that’s all it will offer. Whatever form Kurokuma’s next step takes, however, intensity is a given.

Kurokuma is performing as part of the latest Raw Power Festival, which runs from August 24-26. Find the complete program and tickets here.