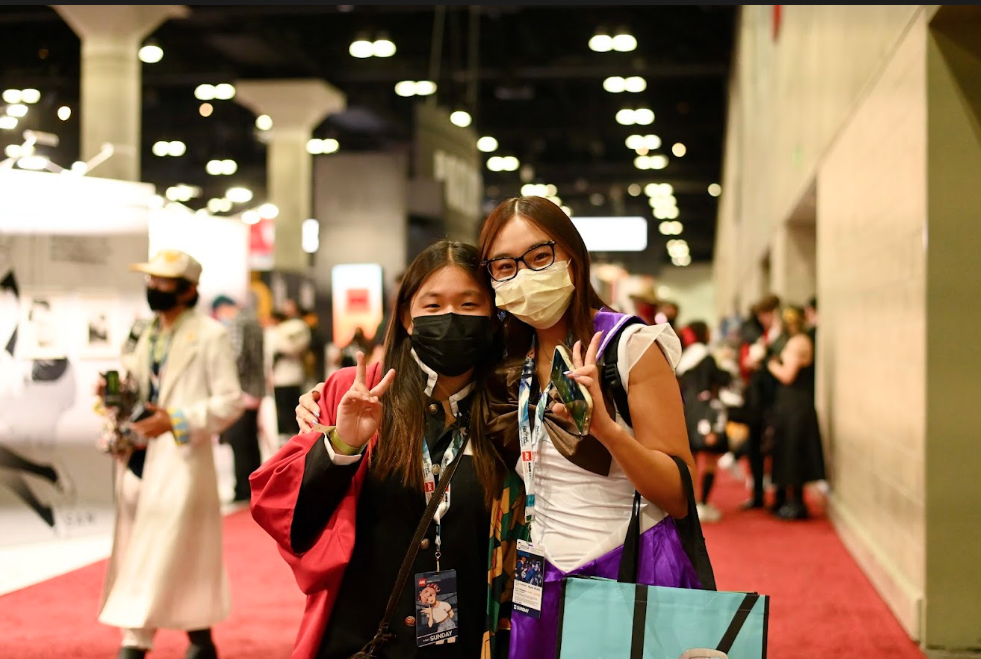 THROUGH THE FIRE: An Unforgettable Anime Exhibit

Having received an invitation from the Society for the Promotion of Japanese Animation, I had the chance to experience my first anime convention (or really, the first convention already) this year alongside fellow newbies and longtime veterans. After browsing the many faces of the crowd, I began to appreciate the many fans, cosplayers, vendors, and collectors who came together to celebrate their favorite anime characters and favorite shows.

As in the past, attendees were able to choose from one-day passes all the way up to the four-day all-access pass. However, new to the convention this year was the queue to verify negative COVID-19 tests or vaccine cards. Located on Chick Hearn Court next to the Crypto.com (née Staples) Arena, attendees could then expect to receive wristbands authenticating their passage through the COVID screening station.

The convention center’s COVID-19 protocols were not without criticism, however. With fluctuating vaccine requirements and side-by-side aisles, grievances against Expo have generated discussions in person and online.

The pandemic has also had another grip on the convention. Attendance rates have steadily increased since the convention began in 1992, with 2022 being no exception. But, as the first in-person Anime Expo since 2019, some longtime fans have argued that this year’s surge in attendance stems in part from quarantine boredom.

“I think it had a lot to do with people’s boredom and their desire to find new hobbies and explore different kinds of media,” says Imogen Yang, who has been attending the Expo with her family since the ‘childhood. “With plenty of free time, it’s easy to want to find new movies and shows to jump into.”

Leon Vanguard, a cosplayer I spoke to on day one, spent over 800 hours on his cosplays. ”) for this year’s Expo.

“I’m a blacksmith, so I made this out of cardboard, then metal. I had to do some reworkings for the first time,” he says, pointing to Alphonse Elric’s (“Fullmetal Alchemist”) armor which he also displays in a wooden cart attached to his bicycle – a cosplay that he wore at previous Expos.

“And it was made of copper and leather,” he says, showing off his Mumen Rider cosplay.

Cosplaying at Anime Expo is a unique experience, with throngs of photographers – amateur and professional – flooding the halls as well. Cameras in hand, cosplayers can expect an entourage of fans and enthusiasts, all eager to take a photo of or with their favorite characters.

“People like to take a lot of pictures. I think we got our picture taken more than we saw from the convention,” laughs one cosplayer, Olivia, wearing a Maki Zenin cosplay from “Jujutsu Kaisen.”

“I don’t mind,” adds her friend Anna, cosplaying Nobara Kugisaki (also from Jujutsu Kaisen). “People are excited. They’re excited to see our costumes, and I think that’s super cool. I love the energy that people bring to the convention.

In addition to taking photos with cosplayers, attendees were free to explore the Expo’s various events and activities. Among the many scheduled programs were TV show premieres, Q&A sessions with voice actors, industry and news panels, maid and butler coffees, movie screenings , musical performances and walks in the exhibition hall. Vendors were also an integral part of the convention’s livelihood, with Artist Alley attracting thousands of customers throughout the four days.

Japanese and Japanese American culture were also high on the Expo agenda. Proceeds from the annual Anime Expo Charity went to the JACCC while the Little Tokyo Historical Society, “The Fall and Rise of Little Tokyo,” and “Tanabata Festival Community Kazari Workshop” panels were among the many events showcasing the tradition. and history. A taiko workshop hosted by Torrance-based UnitOne also offered Expo visitors an introductory lesson in the spirit of Japanese taiko. Calling the participants row by row, the facilitators gave participants the opportunity to try their hand at the drum after a skillful demonstration.

“I thought it was a great experience because being able to see it and then being able to experience it was so different. It’s so much harder than it looks,” one participant commented after the panel.

Other events were also overflowing with that signature “otaku” energy – so much so that a handful of events reached their carrying capacity. Fans waited in countless queues that snaked inside and outside the convention center, while some of the most popular events were capped entirely at a certain number.

Either way, Anime Expo 2022 remained quite a spectacle and, at its core, embodied the heart of all things anime. Although I was arguably a chip next to the giants – my mere few months watching anime pale in comparison to those consuming the medium since years – it was not difficult to feel the fervor and passion that was taking hold in the masses.

“What has been your favorite event so far? I asked my last convention interviewee, show veteran Mariah Balandran.

“It’s a little hard to tell,” she said, her eyes raised to the ceiling, deep in thought. She looks at me with a smile and has her answer: “They were everything very funny.”

Kyra Karatsu is a sophomore and writes from Santa Clarita. She can be contacted at [email protected]

Searching for freedom and openness in the Indo-Pacific