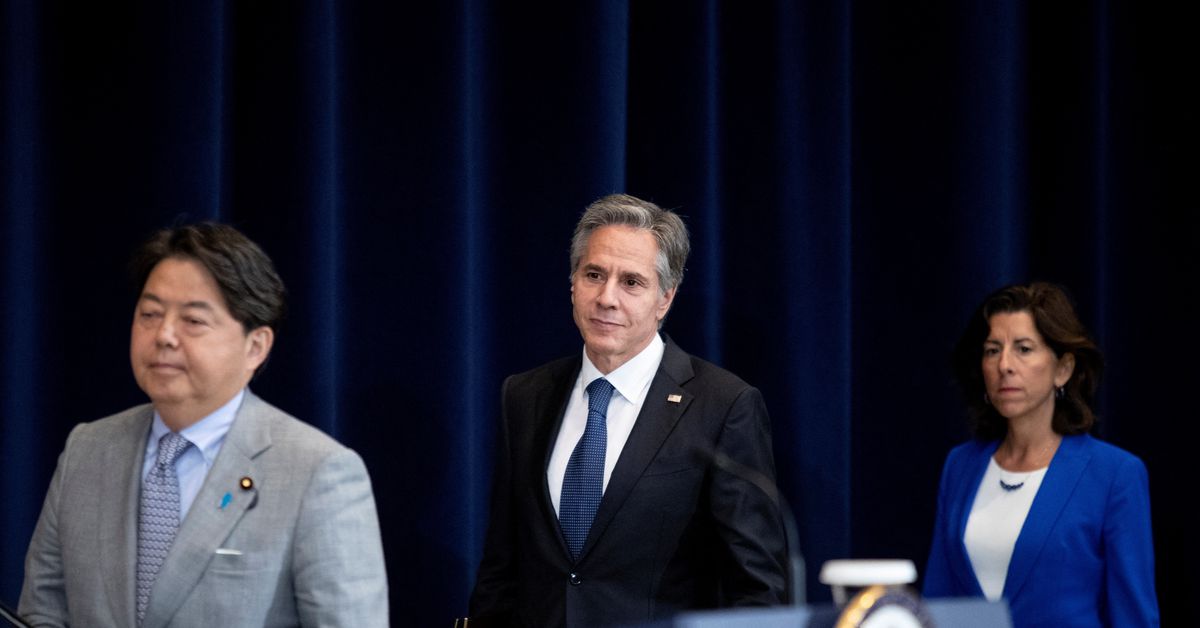 WASHINGTON, July 29 (Reuters) – The United States and Japan launched a new high-level economic dialogue on Friday aimed at pushing back against China and countering disruption caused by Russia’s invasion of Ukraine.

“As the first and third largest economies in the world, it is essential that we work together to defend the rules-based economic order, an order in which all countries can participate, compete and prosper,” Blinken said. during the opening session.

Blinken said recent global events, including the COVID-19 pandemic and the war in Ukraine, had shown the vulnerability of critical supply chains, while a growing number of countries grappled with debt burdens. due to unsustainable and non-transparent lending practices.

“The coercive and retaliatory economic practices of the People’s Republic of China force countries to make choices that compromise their security, their intellectual property, their economic independence,” he said.

Japan’s Hayashi called Russia’s invasion of Ukraine a serious challenge to the international order and – in an apparent reference to China, although he did not name it directly – referred to attempts ” to use economic influence in unfair and opaque ways to achieve … strategic interests and change the existing international order.

Hagiuda said ‘Japan will move quickly’ on next-generation semiconductor research and said Washington and Tokyo had agreed to launch a ‘new R&D organization’ to establish a secure source of components vital.

The research center would be open to participation from other “like-minded” countries, he said.

The two countries did not immediately release additional details of the plan, but Japanese newspaper Nikkei Shimbun earlier reported that it would be set up in Japan by the end of this year to research semiconductor chips. of 2 nanometers. It will include a prototype production line and is expected to start producing semiconductors by 2025, according to the newspaper.

“As we discussed today, semiconductors are the backbone of our economic and national security,” Raimondo said, adding that officials had discussed collaboration on semiconductors, “particularly when it comes to advanced semiconductors”.

Taiwan now manufactures the vast majority of semiconductors below 10 nanometers, which are used in products such as smart phones, and there are concerns about the stability of supply if there is a problem involving Taiwan and China, which considers the island as a renegade province.

The United States and Japan said in a joint statement that they would work together “to foster supply chain resilience in strategic sectors, including, in particular, semiconductors, batteries and minerals. reviews”. They pledged to “build a strong battery supply chain to lead collaboration between like-minded countries.”

Regarding relations with Russia, Hagiuda said he had conveyed to the United States Japan’s intention to maintain its stake in the Sakhalin-2 oil and gas project despite sanctions against Moscow by Washington, Tokyo and the United States. others following the invasion of Ukraine.

“There are voices calling for withdrawal. But that would mean that our participation would revert to a third country and Russia would make a huge profit. We have explained how maintaining our participation is in line with the sanctions, and I think we have won the understanding of the United States,” he said.

Friday’s meeting came at a time of heightened tensions over Taiwan.

Chinese leader Xi Jinping on Thursday warned during a call with US President Joe Biden against playing with fire on Taiwan, underscoring Beijing’s concerns over a possible visit to the island claimed by China. Speaker of the US House of Representatives Nancy Pelosi. Read more

The U.S. House of Representatives on Thursday passed sweeping legislation to subsidize the domestic semiconductor industry as it competes with Chinese and foreign manufacturers. Read more

San Francisco is one of the “greatest places in the world”. Here are 10 reasons why

Long after the Tokyo trial, the Indian judge retains a place of honor in the political memory of Japan