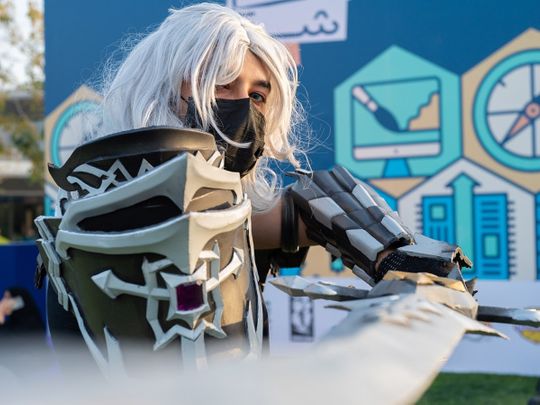 Noura Al Awadhi, anime designer at Mend Hero Academy, said her professional journey in the world of anime began with the creation of a comic about an Emirati orphan whose life is transformed when he becomes a super hero. Her passion for this art form led her to launch Mend Hero Academy, a platform for young artists to design their own comics.

Sharing his entrepreneurial journey, game developer Haroun Almansoori of Kashkool Games advised aspiring game developers to focus on developing what they can within their budget because it wouldn’t be possible to compete with the substantial budgets of major game companies.

Passion for comics is essential to the success of artists, said comic artist Hassan Al Ali, who uses his passion to introduce cultures around the world to younger generations and aims to instill behavioral and moral messages.

Salah Abuidrees, founder of Salahcartoonz, said that as an art form, cosplay does not require massive budgets but a unique artistic eye to produce an exceptional creation.

In the second roundtable titled “How to Leverage Animation Content Through Social Media” and moderated by Ahmed Lootah, Omar Sharif Al Ali and Rashid Al Khayal, panellists discussed the power of social media.

Al Ali said: “Young people benefit from me because I am a fan of pop culture, and they find a connection with me that leads them to follow me on social media, and then companies see me as a bridge for them. approach and promote them. .”

Al Khayal credited anime for unleashing his imagination, noting that the art form of anime was a successful import by Arab dubbing companies and continues to have a large following among young and older generations of the region.