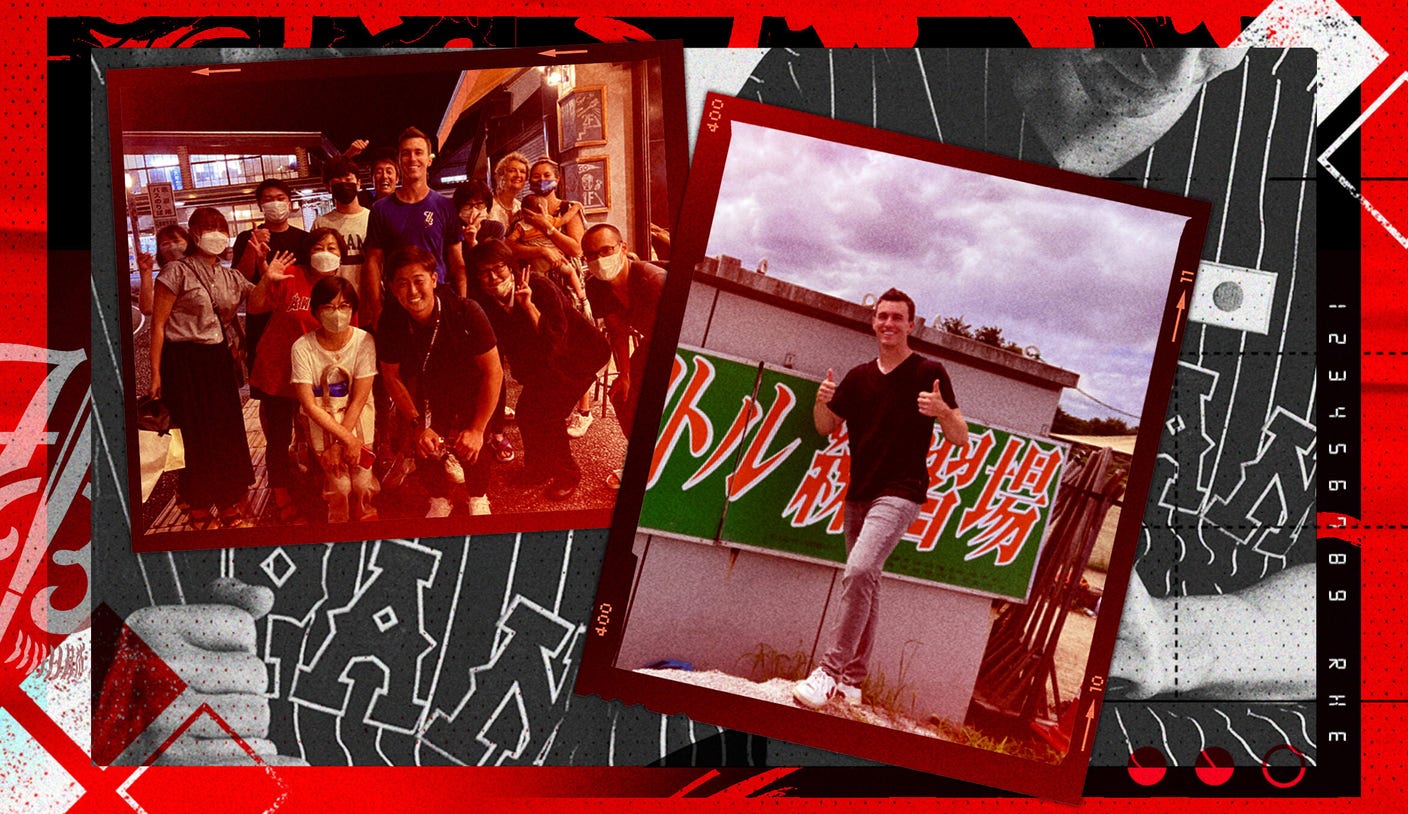 Editor’s note: Ben Verlander is spending time in Japan exploring Shohei Ohtani’s roots, learning about the country’s culture and meeting fans. This is the fourth in a recurring series which began on Friday August 19.

The day started with a 4:30 a.m. wake-up call. I hopped on a bullet train from Tokyo Station at 6am to go to Hanamaki, Iwate, the region of the country that produced the legendary Ohtani. I wrote yesterday that we were going 150mph – it was more like 200mph, as this beautiful train took us through the Japanese countryside with speed and style.

Ben Verlander boards a bullet train for the journey from Tokyo to Hanamaki. (Photo by Nick Rago/FOX Sports)

While we were en route I was offered many options for breakfast. Most of them involved tuna in one form or another. My interpreter and guide, Masa – who I’ll take every opportunity to say was key to making this trip happen – wolfed down a sandwich of two pancakes with beans in the middle. He was quite proud of his selection.

Now, a bit about our destination. Iwate is one of the northernmost prefectures (state-like) on Japan’s largest island. It’s scenic, mountainous and apparently a great winter snowboarding destination. Within Iwate, Hanamaki is a quiet town that reminds me of my hometown in Virginia.

Once we got to the station, we headed straight for another baseball field. This one was very different from the bright lights of Tokyo Dome. The Mizusawa Little League field is where Ohtani learned to play the game as a child.

Nestled between two highways, a river and what appeared to be a mineral field, it is the site of the origin story of the world’s greatest baseball player.

I learned that the river over the right field fence actually played a big part in this story. As Ohtani began to develop some pop, he got into the habit of hitting balls over the fence and into the river to be lost forever. Eventually, Ohtani’s coach came to him and asked him to stop hitting balls in the river as they couldn’t afford to keep buying new ones. So Ohtani learned to drive baseballs into left field consistently, laying the foundation for his ability to hit all majors pitches.

The young players of the Mizusawa Little League field welcome Verlander to their training. (Photo by Nick Rago/FOX Sports)

I would be remiss if I did not mention the children we met in this field. None spoke English, but we were all bonded by our love of the player who ran the bases on this very ground. We took pictures, played catch, and debated whether pitcher Shohei could take out batter Shohei (with some help from Masa, of course). I really didn’t want to leave.

As we were leaving, the team invaded our van to say goodbye. I cannot put into words what this moment meant to me. I will never forget him.

Then we drove to another point of interest in the Angels star’s life: Hanamaki Higashi High School. Along the way, I made a quick stop for what was, without a doubt, the best convenience store sushi I’ve ever had – not that there’s ever been much competition for that title.

When we arrived on campus, my jaw dropped. It was not like any high school I attended in the United States. It looked more like a nice college campus. Sports facilities and a bell tower rise above the tree line, unlike any facility I had seen at this point in my trip to Hanamaki. We parked and headed straight for the stadium where Ohtani’s legend began to take shape.

The day allowed Verlander to see two fields where Ohtani developed his baseball skills as a youth. (Photo by Nick Rago/FOX Sports)

This stadium is huge. It has a capacity of 12,000 and looks like a minor league stadium. (I played a lot.) It has a huge electronic scoreboard in the outfield and grass so pristine you might mistake it for Augusta National. Above the right field fence is a patch of grass, then another fence, then a row of trees. When I asked if any notable Ohtani stories had happened here, a former teammate from his high school told me he once hit land OVER those trees. I saw a video of this moment and I can confirm that it is as absurd as it sounds.

While we were there Ohtani’s old team was having a scrum against another local team. After the match, they took part in a practice which was great to watch. It was the most optimistic and technically sound high school practice I have ever seen. Communication was continuous and the execution of each play was precise.

For practice, they were working on a “situations” drill in which the coach places runners on the bases where they want them, the defense is set, and the coach hits the balls exactly how they want them. When a ball is hit, a runner from home plate takes off, then play proceeds. It’s a classic baseball drill I’ve never seen performed so perfectly.

Verlander paces the field at Hanamaki Higashi High School and contemplates a legendary home run that Ohtani hit outside the stadium. (Photo by Nick Rago/FOX Sports)

Once the exercise was over, their day was far from over. After a full scrum and drills, the team returned to the training ground to take more BP and perform more individual drills. A former gamer told me that these kids were only allowed to use their smartphones for an hour a day to call their family. Other than that, they were completely focused.

When I pressed him about it, he responded in English with something we can both agree on: “Baseball is life!”

We returned to what I was told was one of the nicest hotels in Iwate, the Hanamaki Onsen. To better explain this, this is a traditional Japanese hotel with Tatami rooms. After playing baseball my whole life, I’ve probably stayed in thousands of hotel rooms, but never one like this.

I opened the door and was greeted by a large empty room with a coffee table, two chairs flat on the floor, and not much else. I opened the manual which read “INSTRUCTIONS” in English, but that turned out to be the only English word in the book.

After searching my room for a good five minutes, a passerby told me that when I went to dinner, the hotel staff came to make my bed. I asked him more questions and ended up learning more in those few minutes than I could have ever imagined about Japanese culture. I was told to put on the traditional robes that had been left in my hotel room and head to the dining room, where I experienced a buffet that would put Vegas to shame. Sushi, sashimi, pasta, crab and dozens of other things that I still haven’t identified but were to die for.

Our first meeting of the trip was scheduled for that night. Hanamaki is a small rural town so I wasn’t sure what to expect. It was scheduled for 8 p.m., and I showed up at 8:05 a.m. to a crowd of people. Already, about fifteen people were standing there, waiting for my arrival. I got out of the cab and they started cheering and clapping as I got in. It was another “pinch me” moment. It is important to note that this is not about me. This is the “Flippin’ Bats” community that gathers around Shohei Ohtani. These encounters are really just a group celebration of Ohtani.

One of the first encounters I had was with a man who explained to me why we love the podcast so much. “The people of Iwate are really, really shy. They won’t talk openly about Shohei Ohtani and how they think he should be the league MVP again,” he said. “You speak on behalf of the entire Iwate Prefecture.”

Fans of the “Flippin’ Bats” podcast come together to share stories of Shohei Ohtani. (Photo by Nick Rago/FOX Sports)

Another girl drove over 40 minutes to meet and share her story. She is terminally ill and she values ​​Ohtani very much because of how much fun he has while going about his business. This appreciation led her to find me. She said “Flippin’ Bats” continued to help her through life, adding to the continued brightness and positivity she found through her love for Ohtani.

The evening ended after the meeting, but not before gifts were given and a group photo was taken. I left with a beautiful bouquet of flowers, handmade glass, earplugs, a wind chime, handwritten letters, and other keepsakes that will last a lifetime.

Ben Verlander is an MLB analyst for FOX Sports and the host of the “Flippin’ Batspodcast. Born and raised in Richmond, Va., Verlander was an All-American at Old Dominion University before joining his brother, Justin, in Detroit as the Tigers’ 14th-round pick in 2013. He spent five years in the Tigers organization. Follow him on Twitter @Ben Verlander.

Get more from Major League Baseball Follow your favorites for game insights, news and more.