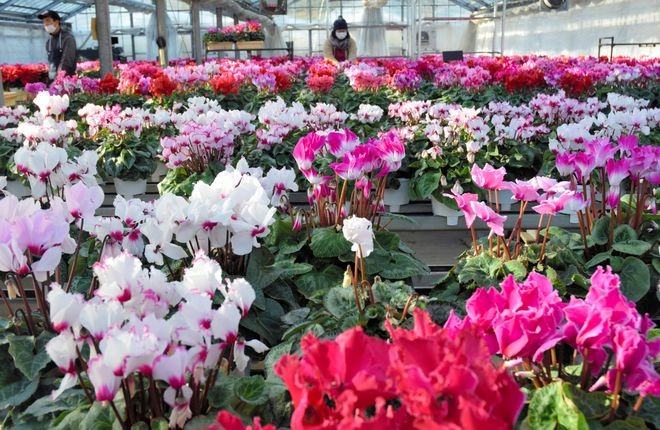 Every time I see cyclamen at a florist this season, a sweet melody starts playing in the back of my ears.

Entitled “Shikuramen no Kahori” (Scent of Cyclamen), it was a 1975 hit sung by Akira Fuse.

The opening words go to the effect, “There is nothing as pure as a cotton white cyclamen.”

There is also a line that says “The scent of cyclamen floats in vain.” But lyricist and composer Kei Ogura, 77, noted: “Back then, all cyclamen sold in stores were fragrance free.”

He knew it, he explained, but decided to insert the word “perfume” to broaden the image of the song.

At the time, Ogura was an employee of Dai-Ichi Kangyo Bank (now Mizuho Bank). He saw a white cyclamen while visiting a customer. When the song was over, it unexpectedly became a mega-hit.

This prompted the horticultural industry to compete to grow new species of cyclamen, resulting in the development and sale of fragrant varieties.

This year marks the 50th anniversary of Ogura’s debut as a singer-songwriter.

I was pretty sure he would pick the Cyclamen song as his best work, but I was apparently wrong. He said he had “picked up” some phrases from poems by Kitahara Hakushu (1885-1942) and learned the poetic structure of numbers from Elvis Presley (1935-1977).

Cyclamen species are native to the Mediterranean basin. In Europe, they are valued purely for the beauty of the flowers, and growers have strived to develop odorless cultivars.

It’s strange to hear that the opposite was the case in Japan, where growers sought to develop strongly scented varieties.

The song title contains the word â€œkahoriâ€ written in Hiragana, which is unusual. Normally it is written “kaori”, but Ogura intentionally ignored the norm.

â€œIt’s more important to create words that resonate in people’s hearts, rather than striving for grammatical correctness,â€ he explained.

It is a doubly and triply profound masterpiece.

Vox Populi, Vox Dei is a popular daily column that covers a wide range of topics including culture, the arts, and social trends and developments. Written by veteran writers of Asahi Shimbun, the column offers useful perspectives and insights into contemporary Japan and its culture.