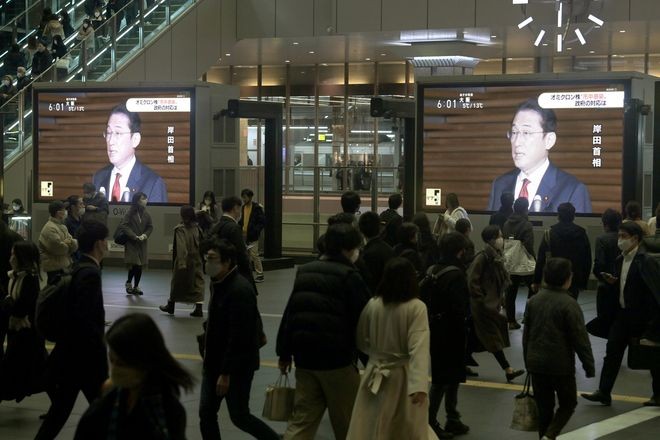 When you walk into a darkened movie theater, you can’t see anything at first. You must proceed with caution, lest you run into someone.

As your eyes adjust to the darkness, rows of seats begin to emerge. This process is known as “dark adaptation”.

The opposite of this is â€œadaptation to lightâ€. When you turn on the light in the middle of the night, you are temporarily blinded by the glare and it takes a while before you can see again.

The retina of the eye is not able to immediately adapt to sudden changes in different levels of light.

It has been just over two months since Prime Minister Fumio Kishida replaced Yoshihide Suga, but perhaps we still have to fully adapt to the change.

The obscurity of the Suga era was due to the PM’s failure to heed opposing views as well as his inability to say things that resonated with the public.

Then Kishida came along, touting his ability to “listen” and “speak”, and that was all it took to create the impression that light had replaced darkness. I imagine this has so far helped keep her approval ratings stable.

And we may still be in the process of slight adaptation of the years of the Shinzo Abe administration.

Kishida appeared to have made a brilliant decision when all he did was declare that he would “throw away” the massive number of leftover sheet masks that Abe intended to distribute to every household – a huge waste. , at the end of the day.

But when you think about it objectively, Kishida wasn’t very decisive at all.

He “listened” to Komeito and agreed to give the package. He then “listened” to the finance ministry and others to donate half the amount in coupons.

And finally, he â€œlistenedâ€ to desperate calls from local governments to scrap the idea of â€‹â€‹coupons and agreed that â€œcash onlyâ€ distributions would be acceptable.

As for the falsification of documents on the Moritomo Gakuen scandal and the controversy over the government’s refusal to appoint members to Japan’s Science Council despite the latter’s recommendation, Kishida leaves these matters in the dark, so to speak.

Our eyes should adjust to this reality before long.

What will Kishida do to stop the spread of the Omicron variant?

Right now, this is the first thing we need to focus our eyes on.

Vox Populi, Vox Dei is a popular daily column that covers a wide range of topics including culture, the arts, and social trends and developments. Written by veteran writers of Asahi Shimbun, the article provides useful perspectives and insights into contemporary Japan and its culture.