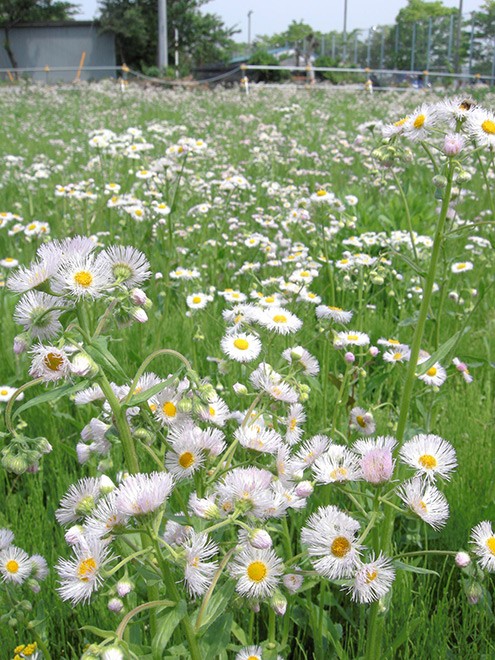 I often stop when I find blooming flowers along the road this time of year.

The two members of the Asteraceae daisy family are like two peas in a pod.

Harujion has drooping buds, which turn upwards as they bloom.

Singer-songwriter Masashi Sada composed a song about Philadelphia fleabane, which he calls “Harujo-on”.

He assigns three kanji characters to the flower’s name to be used as phonetic symbols: “haru” (spring), “jo” (woman), and “on” (garden, park).

“Harujo-on looks like you / Looking confused in pale pink / Turned down and shaking.”

In a recent post in this column, I wrote, “Spring, I think, is a season that goes well with dreams, hopes, and aspirations.”

But people sometimes also experience disappointment in this season.

Like harujion buds, people fall in disappointment when they find it hard to get used to a new place and feel it doesn’t meet their expectations.

“You can trust harujo-on / As they never fail to put flowers.”

As Sada sings, we are sometimes encouraged by plants, with buds that endure a harsh winter and flowers that bloom even after being trampled on.

Botanist Hidehiro Inagaki’s book, “We Can Learn Important Things from Plants,” talks about weeds whose stems have joints.

It looks like a plant is taking a break from growing by producing a joint.

But weeds with joints are resilient, pulling buds from joints even if they’re torn or cut, according to Inagaki.

Perhaps people also become more resilient by “creating” joints when they suffer from problems and waver in judgment.

Even though they have come to a completely new world, the plants are now blooming, looking up, as if declaring that this is their place in the world.