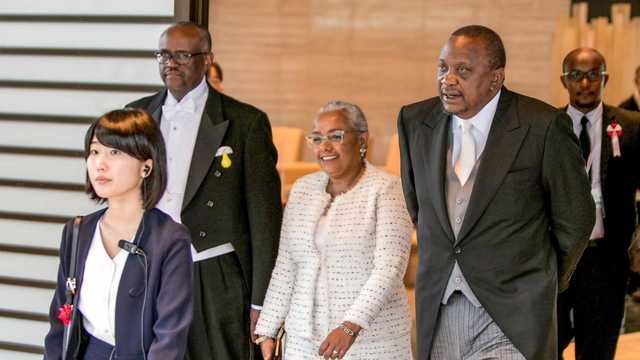 It was in July 2019 that I arrived at Jomo Kenyatta International Airport with my wife. This was after a period of about 40 years since my first visit to the country as our honeymoon destination, when I was a young diplomat who had just started to explore his professional passion.

I am now completing my term as Japanese Ambassador to Kenya at the end of this year. It also puts an end to my 43-year diplomatic career. Fortunately for me, my career as a diplomat has been embellished with African elements.

My diplomatic debut was in Nigeria in 1982. Subsequently, I was continually involved in African affairs at Headquarters and later returned to this beautiful and mystical continent in 2012 as Japanese Ambassador to Sudan. .

It is a great honor for me to have my final here in Kenya, the most important country for Japan in Africa. Kenya has taken advantage of its position as one of Japan’s closest partners over the past decades.

In this turbulent region, it is remarkable that Kenya has successfully made political transitions through democratic elections since its independence.

Peace and stability achieved through democratic principles is what Japan always emphasizes when we refer to Kenyan values. This is exactly why Japan supported Kenya’s candidacy for the United Nations Security Council in 2019.

Today, President Uhuru Kenyatta proudly validated our confidence and expectations by successfully navigating global and regional puzzles as an important member of the UNSC during this year.

TICAD 6 in 2016 was another case to describe Japan’s high expectations for this promising East African country. Kenya was the first country to host the TICAD conference outside our home country in its long history since 1993.

TICAD 6 co-hosted by Japan and Kenya in 2016 surely conveyed to the global community the importance of African ownership and the rich potential through a strong partnership between us.

It was also at TICAD 6 that Japan first announced the â€œFree and Open Indo-Pacificâ€ initiative, which is now being promoted not only by Japan, but also by G7 countries and others. like-minded countries. It was no coincidence, of course.

We have intentionally chosen Kenya as the location to launch this crucial policy for global peace and prosperity, as the country offers a gateway to East and Central Africa, with an abundant young population full of potential.

Kenya has been the largest recipient of Japanese official development assistance in sub-Saharan Africa. I have signed over 100 billion shillings in loans and grants in Kenya in the past two and a half years alone.

The recent focal point is the port of Mombasa. Japan has worked closely with the Kenyan government and business leaders to add additional attractions to the port by developing a special economic zone, the Dongo-Kundu SEZ.

Japan, a small island nation in the Far East, has achieved economic growth and prosperity by actively engaging in maritime trade. Maritime safety is our top priority if we are to enjoy continued peace and prosperity.

On this basis, Japan has extended its assistance and cooperation to the very first Kenya Coast Guard services, and our cooperation in the field of maritime security is to be explored much further.

Kenya’s importance is of course not limited to its relationship with Japan, but also extends to its impact in regional policy.

Currently, Kenya holds the Presidency of the East African Community and the current President of the Organization of African, Pacific and Caribbean States (OACPS), and is also an active member of many International organisations. Across all these platforms, Kenya is confidently raising its voice, promoting the values â€‹â€‹of Africa and the Global South.

Since the end of the Cold War, the continent, particularly the East African region, is now facing the biggest shift in the regional balance of power. For African countries that are linked to each other in terms of history and people, unrest in a nation directly affects the security and domestic politics of its neighbors.

However, Kenya, surrounded by troubled countries, has held firm with solid stability in regional politics and has shown strong leadership in favor of peace in the region. I sincerely pay tribute to the positive impact Kenya has had on the region and assure that Japan will continue to support Kenya’s role and engagement in the region.

During my tenure, I traveled to around 15 counties to attend handover ceremonies for schools, factories and clinics and whenever I visited local places I had the opportunity to interact with the people. local. Among the colorful and unique music and dancing to the region that the people presented when welcoming us, there was one thing common to all of Kenya.

It was the warm hospitality of the people. By interacting with the warm people of Kenya and seeing their dedicated efforts to improve their lives, I firmly believe that this country has a bright and prosperous future.

In the second half of my term, I was delighted to receive the nickname “Singing Ambassador”. This nickname is a courtesy of my musical performances on various occasions where my wife and I have sung Kiswahili songs.

I like Kiswahili songs in general but one of my favorites is Daima, sung by my good friend, Eric Wainaina. The lyrics, which recognize the challenge of building a nation with such a wide variety of ethnicities and promoting the unity of people, really touches me.

My long diplomatic career has taught me the fundamental importance of interpersonal understanding through mutual respect. It was a great pleasure that I could embody this value through music in the interaction with the Kenyan people.

Ryochi is the outgoing Japanese Ambassador to Kenya