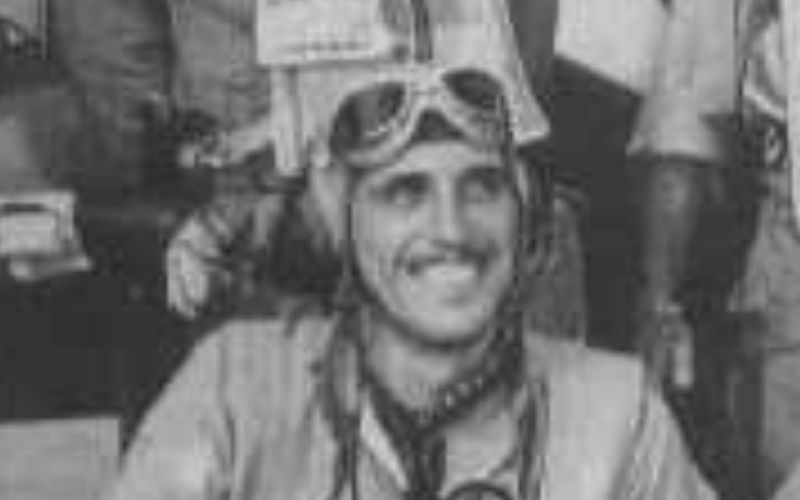 Christopher Magee was born on June 12, 1917 in Omaha Nebraska to parents Fred and Marie Magee (née Considine). He is named after his uncle and respected Republican politician from Pittsburgh, also named Christopher Magee (1848-1901). In 1918 the Magee family moved to Chicago where Chris graduated from Mount Carmel High School in 1935.

In 1941, Magee traveled to Canada to join his cousin John Gillespie Magee Jr in the Royal Canadian Air Force. By the time Magee’s training was nearing completion in 1942, Japan had attacked Pearl Harbor, leading Franklin Roosevelt to declare war on the Empire of Japan. Magee was approached in Prince Edward Island by American recruiters where he agreed to become a US Marine pilot.

Magee continued his aviation training in America until late 1942, where he received his gold wings, becoming a Marine Corps fighter pilot. In July 1942, Magee was assigned to VMF-124, nicknamed black sheep, fly a Wildcat fighter jet.

On September 18, 1944, Magee was tasked with providing cover for warships when he spotted thirty enemy Japanese warplanes heading straight for the ships below him. He immediately engaged, shooting down one Japanese aircraft and driving several others into range of naval anti-aircraft fire. As he shot down a second Japanese aircraft, his own aircraft took enemy fire from above, forcing Magee to flee while flying within naval anti-aircraft range. Magee landed with over thirty bullet holes on his plane. For his actions, Magee was recommended the Naval Cross.

After the war, Magee returned to his young family in Chicago, the second most successful ace in his squadron having shot down nine enemy Japanese fighter planes. In Chicago, Magee became involved in bootlegging and black market activities for a time before working as a courier for secret American businessmen involved in Latin American politics.

In 1948, Magee volunteered with the Israeli Air Force at the start of the Arab-Israeli War, becoming a member of the 101st Fighter Squadron based at Ekron Air Base in Israel. When Magee finally returned to Chicago, his wife had left with the children.

In 1949, Magee received construction work establishing early warning networks for the detection of enemy ballistic missiles near Thule Air Base north of the Arctic Circle in Greenland.

In the early 1950s, Magee found himself working as a courier in Chicago.

On June 13, 1955, Magee wandered into The Reserve Savings and Loan Association in Cicero Illinois and pointed a gun at the bank manager, forcing him to hand over $2,500.00.

On January 15, 1957, Magee robbed the Lincolnway West branch of the National Bank and Trust Company in South Bend. For this crime, Magee was convicted and sentenced to fifteen years in Leavenworth Maximum Security Penitentiary. While in prison, Magee earned eighty college credits via extension courses by becoming editor of the prison magazine at Leavenworth (New Era).

Magee was released from prison in 1967, returning to Chicago where he worked as a reporter and editor for a local community newspaper.

Oh! I have slipped the surly bonds of the earth, & danced the skies with silvery Wings of laughter; Towards the sun I soared, and joined the tumultuous joy of sun-split clouds, – and did a hundred things you didn’t dream of – I rode, soared and swung high in sunny silence. Soaring there, I chased the howling wind and launched my passionate craft through footless corridors of air. Up, up the long, delirious, burning blue, I surmounted the windswept heights with easy grace, where never lark nor even eagle flew – And while with a spirit of silent lifting I tried the high inviolability of space, put stretched out my hand and touched the face of God.

This article was submitted to the IrishCentral Contributor Network by a member of the global Irish community. To become an IrishCentral contributor, click here.