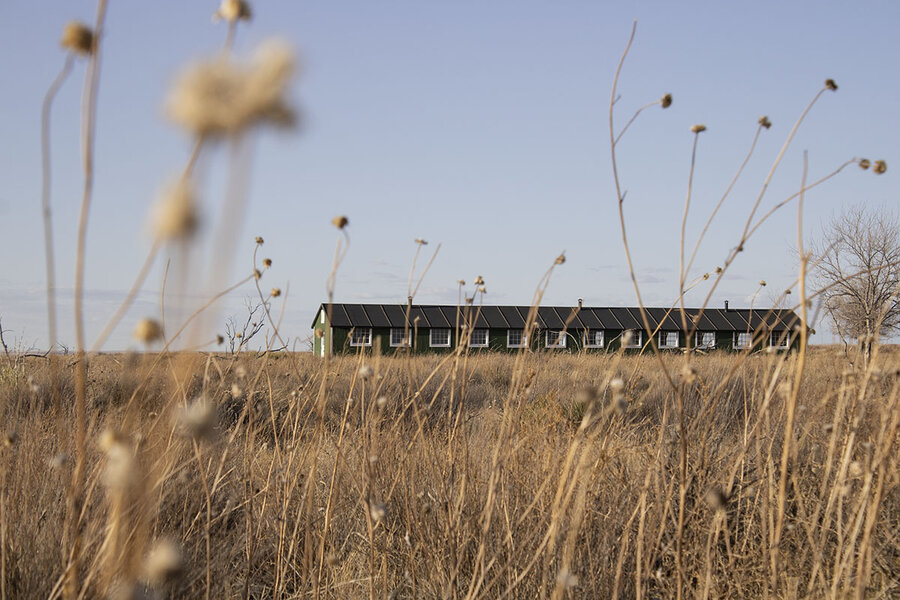 For nearly 30 years, John Hopper, Dean of Students for the Granada School District, and hundreds of his students have helped preserve the rural site and run a museum in Granada. Their sense of civic responsibility has forged ties across cultures and generations, transcending a dark chapter in American history.

Why we wrote this

Who is responsible for preserving the regrettable parts of US history? For years, students in Colorado have answered the call.

“It taught me a lot about empathy,” says Bailey Hernandez, a junior. “You start to think, well, how would I have reacted if my family had been forced into one of these camps?”

Over the years, students have divided their time between the physical preservation of the site and interpretive efforts, giving tours of the museum and presenting to other schools and groups.

Carlene Tanigoshi Tinker, who was very young when her family was forced to move to Amache, has visited on several occasions.

“These kids are really, really amazing to be so dedicated,” she says. “They know how important it is and they want to preserve that history.”

The wind sings a wordless song across the plains of Colorado, swaying acres. From the brush rise the concrete remains of a camp that imprisoned more than 10,000 people.

Carlene Tanigoshi Tinker, a toddler during World War II, lived in this Japanese-American internment camp, called Amache. She sat on her father’s shoulders with a scarf around her face – a shield against the windswept sand – as they lined up outside to eat. His parents were US citizens.

After their release, the stigma followed her to Denver, she said, where children pelted her with rocks after school. For the rest of her childhood, Amache was “something we never discussed,” recalls Ms. Tinker, a retired biology teacher living in California. “I think it was a painful experience.”

Why we wrote this

Who is responsible for preserving the regrettable parts of US history? For years, students in Colorado have answered the call.

Last month, President Joe Biden appointed Amache as a national park, but for some it was already basically used. For years, camp survivors and their descendants have visited the site that once held their families, hosted by a local educator in nearby Granada.

For nearly 30 years, John Hopper, Dean of Students for Granada School District RE-1, and hundreds of his students have helped preserve the rural site and run a museum in Granada. Their sense of civic responsibility has forged ties across cultures and generations, transcending a dark chapter in American history.

“It taught me a lot about empathy,” says Bailey Hernandez, a junior. “You start to think, well, how would I have reacted if my family had been forced into one of these camps?”

One of her predecessors showed Ms Tinker around Amache in 2004, her first trip back. She remembers feeling elated.

“These kids are really, really amazing to be so dedicated,” Ms Tinker says. “They know how important it is and they want to preserve that history.”

Amache survivor Carlene Tanigoshi Tinker stands in front of a 2021 restored recreation building where she attended preschool while her family was interned in the 1940s in Prowers County, Colorado.

Two months after the December 1941 Japanese attack on Pearl Harbor, Franklin Roosevelt signed Executive Order 9066. This led to the forced displacement of over 100,000 people of Japanese descent from their homes to internment camps. Amache, one of 10 such sites, was originally called the Granada Relocation Center and operated between 1942 and 1945.

In the rattlesnake-infested plains of southeastern Colorado, Amache mostly detained US citizens — who were deemed potential enemies and subjected to loyalty questionnaires. Despite these conditions, the internees embellished their arid captivity by planting trees and gardens, even creating a pond.

The US government under Ronald Reagan officially apologized in 1988; repair checks followed. And now, with the signing last month of the Amache National Historic Site Actsupervision of the property will be transferred to the National Park Service.

This is good news for Mr. Hopper, for whom everything related to Amache is a daily responsibility.

Housing barracks at the Amache Internment Center near Grenada, Colorado, where Japanese Americans were relocated during World War II, June 21, 1943. Despite the situation, the internees graced their arid captivity by planting trees and gardens, even creating a pond.

Although he’s recognized for his work — including praise from Japan’s consul general in Denver — Mr. Hopper says he prefers to “stand apart” and center his students.

“It’s a heavy, heavy subject, especially when you’re talking about civil liberties,” he says. “But it’s part of my job that I like to talk about – it needs to be talked about.”

Mr. Hopper, who does not have Japanese ancestry, first visited Amache as the new social studies teacher at Granada High School in 1990.

“It looked like a hill of sagebrush cactus with cattle on it,” he recalls.

In 1993, some “really bright and willing students” wanted to pursue an Amache project and began interviewing a survivor Mr. Hopper’s family knew. That year, the teacher created the non-profit association Amache Preservation Society (APS). What started as extracurricular activities eventually formalized into a classroom. Working with survivors, descendants, and the city, as well as partnering with groups like the Amache Club and the Amache Historical Society, have been key to building trust.

Over the years, students have divided their time between the physical preservation of the site – mowing or renovating a cemetery or other landmarks – and interpretive efforts. APS students present to other schools and groups and help maintain the Amache Museum, where they also act as guides.

A reconstructed guard tower watches over the site of a former Japanese American internment camp, Amache, in Prowers County, Colorado, March 24, 2022. Amache held mostly US citizens – who were seen as potential enemies and subject loyalty questionnaires.

“I can’t think of any group that does more for Amache,” says Calvin Taro Hada, an Amache descendant and president of Colorado’s Nikkeijin Kai, a Japanese-American organization.

“The first time I saw John’s kids give a presentation, … I thought, OK, that’s what this is about,” says Bonnie Clark, professor of anthropology at the University of Denver and leader of the DU Amache Project. “They are super committed,” she adds.

When Mr. Hopper retires, he plans to pass the torch of APS leadership to social studies professor Tanner Grasmick, who joined APS as a high school student.

The teacher credits his experience as a student of Mr. Hopper as the reason he became an educator himself.

“You hear what they had to go through, the adversities they had to face, and for them to come back and be so thankful [for the preservation efforts]… it’s incredible“, said Mr. Grasmick.

The teacher from a farming family says he still corresponds with his Japanese host mother, years after a trip abroad where he and his peers gave presentations. Before the pandemic, APS members traveled to Japan every two years and often stayed with host families.

No longer the enemy

One March morning in Grenada, Bailey is wearing a gray-black varsity jacket for a high school sports team — or so it seems. Closer examination reveals a stitched image of an internment camp barracks. This is part of his APS tour guide outfit at the Amache Museum.

It passes through exhibits of the staged interior of a barracks, a sculpted calabash adorned with seeds, a military uniform.

“Of all the camps, we actually have the highest volunteer rate” for internees joining the US military, Bailey explains.

His eyes widen as he speaks, as if each story of fact fascinates him anew. At the end of the tour, Bailey impressed guest Gene Bonventre.

“He seemed to really know his stuff and be enthusiastic too,” explains Dr. Bonventre, retired from the Air Force. “It made visiting the museum that much more special.”

The visitor says he then heads to Amache, about a mile and a half away. Ms Tinker plans to return soon to attend the DU Amache Project Field School – her seventh summer.

Get stories that
empower and uplift Daily.

How might her parents react if she dug into the dirt, alongside students, digging up memories that many families have spent years trying to suppress?

“We are no longer seen as enemies,” she says. “They would see it as rewarding.”

Japan’s iconic Nakagin Capsule Tower will be demolished next week